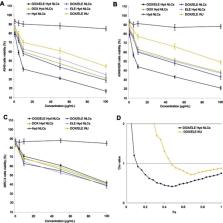 Purpose: Co-delivery of drugs to achieve the synergistic anticancer effect is a promising strategy for lung cancer therapy. The purpose of this research is to develop a doxorubicin (DOX) and β-elemene (ELE) co-loaded, pH-sensitive nanostructured lipid carriers (DOX/ELE Hyd NLCs).

Methods: In this study, DOX/ELE Hyd NLCs were produced by a hot homogenization and ultrasonication method and used for lung cancer treatment. In vitro and in vivo efficiency as well as toxicity of the system was evaluated on lung cancer cell lines and lung tumor-bearing mice.

Conclusion: Since the synergistic effect of the drugs was found in this system, it would have great potential to inhibit lung tumor cells and tumor growth.

Nanotechnological carriers for cancer chemotherapy: the state of the art.

Marilene Estanqueiro,  Maria Amaral,  Jaime Conceição … (2015)
Cancer is a term used for a heterogeneous group of malignant diseases in which abnormal cells divide without control and are able to invade other tissues, resulting in metastasis. According to the last data of World Health Organization the incidence and mortality rates of cancer are high and tend to increase. Chemotherapy is usually used in cancer treatments, but due to the lack of specificity of drugs, is associated to various and damaging side effects that have a severe impact on patients quality of life. Nanotechnology is actually an important area of interest in science and technology, which has been extensively explored during the last decade, particularly in the development of carriers for cytotoxic drugs. These carriers include vesicular and particulate systems such as liposomes, niosomes, transfersomes, ethosomes, micelles, dendrimers, and polymeric, protein and lipid nanoparticles. Polymer-drug conjugates and antibody-drug conjugates have also been studied. The present review is an attempt to contemplate the studied nanocarriers in the field of anticancer drugs delivery, their advantages and disadvantages and future perspectives.

Rohini G Madane,  Hitendra Mahajan (2016)
Cancer nanotherapeutics is beginning to overwhelm the global research and viewed to be the revolutionary treatment regime in the medical field. This investigation describes the development of a stable nanostructured lipid carrier (NLC) system as a carrier for curcumin (CRM). The CRM-loaded NLC developed as a particle with the size of 146.8 nm, a polydispersity index of 0.18, an entrapment efficiency (EE) of 90.86%, and the zeta potential (ZP) of -21.4 mV. Besides, the increased cytotoxicity of CRM-NLC than that of CRM to astrocytoma-glioblastoma cell line (U373MG) in the cancer cell lines was observed. Results of biodistribution studies showed higher drug concentration in brain after intranasal administration of NLCs than PDS. The results of the study also suggest that CRM-NLC is a promising drug delivery system for brain cancer therapy.

Tongxing Cui,  Sihao Zhang,  Hong Sun (2017)
The natural product curcumin and the chemotherapeutic agent doxorubicin have been used in the treatment of many cancers, including breast cancer. However, fast clearance and unspecific distribution in the body after intravenous injection are still challenges to be overcome by an ideal nano-sized drug delivery system in cancer treatment. In this study we design transferrin (Tf) decorated nanoparticles (NPs) to co-deliver CUR and DOX for breast cancer treatment. A pH-sensitive prodrug, transferrin-poly(ethylene glycol)-curcumin (Tf-PEG-CUR), was synthesized and used for the self‑assembling of NPs (Tf-PEG-CUR NPs). DOX is incorporated into the Tf-PEG-CUR NPs to obtain Tf-PEG-CUR/DOX NPs. In vitro cytotoxicity studies and in vivo antitumor activity were carried out using MCF-7 cells and mice bearing MCF-7 cells, respectively. Tf-PEG-CUR/DOX NPs has a particle size of 89 nm and a zeta potential of -15.6 mV. This system displayed remarkably higher efficiency than other systems both in vitro and in vivo. DOX and CUR were successfully loaded into nanocarriers. The in vitro cell viability assays revealed the combination of Tf-PEG-CUR and DOX NPs exhibited higher cytotoxicity in vitro in MCF-7 cells compared with Tf-PEG-CUR NPs alone. Using the breast cancer xenograft mouse model, we demonstrate that this co-encapsulation approach resulted in an efficient tumor-targeted drug delivery, decreased cytotoxic effects and exhibited stronger antitumor effect.