Artemis and ACT: viewing, annotating and comparing sequences stored in a relational database 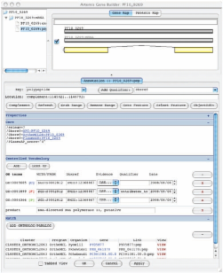 Motivation: Artemis and Artemis Comparison Tool (ACT) have become mainstream tools for viewing and annotating sequence data, particularly for microbial genomes. Since its first release, Artemis has been continuously developed and supported with additional functionality for editing and analysing sequences based on feedback from an active user community of laboratory biologists and professional annotators. Nevertheless, its utility has been somewhat restricted by its limitation to reading and writing from flat files. Therefore, a new version of Artemis has been developed, which reads from and writes to a relational database schema, and allows users to annotate more complex, often large and fragmented, genome sequences.

Results: Artemis and ACT have now been extended to read and write directly to the Generic Model Organism Database (GMOD, http://www.gmod.org) Chado relational database schema. In addition, a Gene Builder tool has been developed to provide structured forms and tables to edit coordinates of gene models and edit functional annotation, based on standard ontologies, controlled vocabularies and free text.

The Sequence Ontology: a tool for the unification of genome annotations

Matt Berriman,  Kim Rutherford (2003)
Artemis is a widely used software tool for annotating and viewing sequence data. No database is required to use Artemis. Instead, individual sequence data files can be analysed with little or no formatting, making it particularly suited to the study of small genomes and chromosomes, and straightforward for a novice user to get started. Since its release in 1999, Artemis has been used to annotate a diverse collection of prokaryotic and eukaryotic genomes, ranging from Streptomyces coelicolor to, more recently, a large proportion of the Plasmodium falciparum genome. Artemis allows annotated genomes to be easily browsed and makes it simple to add useful biological information to raw sequence data. This paper gives an overview of some of the features of Artemis and includes how it facilitates manual gene prediction and can provide an overview of entire chromosomes or small compact genomes--useful for uncovering unusual features such as pathogenicity islands.

*To whom correspondence should be addressed.