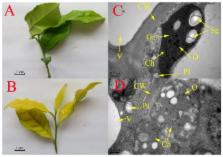 To uncover mechanism of highly weakened carbon metabolism in chlorotic tea ( Camellia sinensis) plants, iTRAQ (isobaric tags for relative and absolute quantification)-based proteomic analyses were employed to study the differences in protein expression profiles in chlorophyll-deficient and normal green leaves in the tea plant cultivar “Huangjinya”. A total of 2110 proteins were identified in “Huangjinya”, and 173 proteins showed differential accumulations between the chlorotic and normal green leaves. Of these, 19 proteins were correlated with RNA expression levels, based on integrated analyses of the transcriptome and proteome. Moreover, the results of our analysis of differentially expressed proteins suggested that primary carbon metabolism (i.e., carbohydrate synthesis and transport) was inhibited in chlorotic tea leaves. The differentially expressed genes and proteins combined with photosynthetic phenotypic data indicated that 4-coumarate-CoA ligase (4CL) showed a major effect on repressing flavonoid metabolism, and abnormal developmental chloroplast inhibited the accumulation of chlorophyll and flavonoids because few carbon skeletons were provided as a result of a weakened primary carbon metabolism. Additionally, a positive feedback mechanism was verified at the protein level (Mg chelatase and chlorophyll b reductase) in the chlorophyll biosynthetic pathway, which might effectively promote the accumulation of chlorophyll b in response to the demand for this pigment in the cells of chlorotic tea leaves in weakened carbon metabolism.

Ning Su,  Huqu Zhai,  Yan-Bing He … (2007)
Chlorophyll (Chl) synthase catalyzes esterification of chlorophyllide to complete the last step of Chl biosynthesis. Although the Chl synthases and the corresponding genes from various organisms have been well characterized, Chl synthase mutants have not yet been reported in higher plants. In this study, a rice (Oryza Sativa) Chl-deficient mutant, yellow-green leaf1 (ygl1), was isolated, which showed yellow-green leaves in young plants with decreased Chl synthesis, increased level of tetrapyrrole intermediates, and delayed chloroplast development. Genetic analysis demonstrated that the phenotype of ygl1 was caused by a recessive mutation in a nuclear gene. The ygl1 locus was mapped to chromosome 5 and isolated by map-based cloning. Sequence analysis revealed that it encodes the Chl synthase and its identity was verified by transgenic complementation. A missense mutation was found in a highly conserved residue of YGL1 in the ygl1 mutant, resulting in reduction of the enzymatic activity. YGL1 is constitutively expressed in all tissues, and its expression is not significantly affected in the ygl1 mutant. Interestingly, the mRNA expression of the cab1R gene encoding the Chl a/b-binding protein was severely suppressed in the ygl1 mutant. Moreover, the expression of some nuclear genes associated with Chl biosynthesis or chloroplast development was also affected in ygl1 seedlings. These results indicate that the expression of nuclear genes encoding various chloroplast proteins might be feedback regulated by the level of Chl or Chl precursors.

Two short-chain dehydrogenase/reductases, NON-YELLOW COLORING 1 and NYC1-LIKE, are required for chlorophyll b and light-harvesting complex II degradation during senescence in rice.

Susumu Katsuma,  Ayumi Tanaka,  Minoru Nishimura … (2008)
Yellowing, which is related to the degradation of chlorophyll and chlorophyll-protein complexes, is a notable phenomenon during leaf senescence. NON-YELLOW COLORING 1 (NYC1) in rice encodes a membrane-localized short-chain dehydrogenase/reductase (SDR) that is thought to represent a chlorophyll b reductase necessary for catalyzing the first step of chlorophyll b degradation. Analysis of the nyc1 mutant, which shows the stay-green phenotype, revealed that chlorophyll b degradation is required for the degradation of light-harvesting complex II and thylakoid grana in leaf senescence. Phylogenetic analysis further revealed the existence of NYC1-LIKE (NOL) as the most closely related protein to NYC1. In the present paper, the nol mutant in rice was also found to show a stay-green phenotype very similar to that of the nyc1 mutant, i.e. the degradation of chlorophyll b was severely inhibited and light-harvesting complex II was selectively retained during senescence, resulting in the retention of thylakoid grana even at a late stage of senescence. The nyc1 nol double mutant did not show prominent enhancement of inhibition of chlorophyll degradation. NOL was localized on the stromal side of the thylakoid membrane despite the lack of a transmembrane domain. Immunoprecipitation analysis revealed that NOL and NYC1 interact physically in vitro. These observations suggest that NOL and NYC1 are co-localized in the thylakoid membrane and act in the form of a complex as a chlorophyll b reductase in rice.

Flavonoid biosynthesis in the tea plant Camellia sinensis: properties of enzymes of the prominent epicatechin and catechin pathways.

I. Abeysinghe,  A. Kumar,  D Treutter … (2004)
Leaves of tea (Camellia sinensis L.) contain extraordinary large amounts of (-)-epigallocatechin, (-)-epicatechin, (+)-gallocatechin, and (+)-catechin and derivatives of these compounds that show positive effects on human health. The health-promoting effects of flavan 3-ols, especially those of green tea, are of scientific and public interest. Furthermore, they play a crucial role in defense against pathogens of tea. Therefore, biosynthesis of these flavonoid compounds was investigated. The anthocyanidin reductase enzyme recently described from Arabidopsis and Medicago was shown to be present in tea with very high activity and produces epicatechin as well as epigallocatechin from the respective anthocyanidins, thus explaining the very high contents of these compounds. A strong combined dihydroflavonol 4-reductase/leucoanthocyanidin 4-reductase activity was demonstrated and catalyzes the key steps in catechin and gallocatechin formation. Together with the enzyme activities and substrate specificities of the preceding enzymatic reactions, the biosynthesis of the most prominent flavonoids of tea is elucidated.