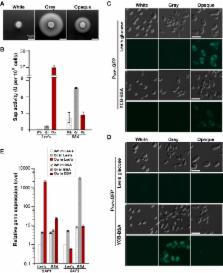 Non-genetic phenotypic variations play a critical role in the adaption to environmental changes in microbial organisms. Candida albicans, a major human fungal pathogen, can switch between several morphological phenotypes. This ability is critical for its commensal lifestyle and for its ability to cause infections. Here, we report the discovery of a novel morphological form in C. albicans, referred to as the “gray” phenotype, which forms a tristable phenotypic switching system with the previously reported white and opaque phenotypes. White, gray, and opaque cell types differ in a number of aspects including cellular and colony appearances, mating competency, secreted aspartyl proteinase (Sap) activities, and virulence. Of the three cell types, gray cells exhibit the highest Sap activity and the highest ability to cause cutaneous infections. The three phenotypes form a tristable phenotypic switching system, which is independent of the regulation of the mating type locus ( MTL). Gray cells mate over 1,000 times more efficiently than do white cells, but less efficiently than do opaque cells. We further demonstrate that the master regulator of white-opaque switching, Wor1, is essential for opaque cell formation, but is not required for white-gray transitions. The Efg1 regulator is required for maintenance of the white phenotype, but is not required for gray-opaque transitions. Interestingly, the wor1/wor1 efg1/efg1 double mutant is locked in the gray phenotype, suggesting that Wor1 and Efg1 could function coordinately and play a central role in the regulation of gray cell formation. Global transcriptional analysis indicates that white, gray, and opaque cells exhibit distinct gene expression profiles, which partly explain their differences in causing infections, adaptation ability to diverse host niches, metabolic profiles, and stress responses. Therefore, the white-gray-opaque tristable phenotypic switching system in C. albicans may play a significant role in a wide range of biological aspects in this common commensal and pathogenic fungus.

The capacity of the yeast Candida albicans to grow in several cellular forms—a phenomenon known as phenotypic plasticity—is critical for its survival and for its ability to thrive and cause infection in the human host. In this study, we report a novel form of C. albicans, the “gray” phenotype, which may enhance fitness and confer an adaptive advantage for this important pathogenic yeast in certain host environments. The gray cell type, together with the previously discovered “white” and “opaque” cell types, forms a tristable phenotypic switching system. The three phenotypes differ in their cellular and colony appearance, their global transcriptional profiles, their production of secreted aspartyl proteinases (enzymes that degrade host tissues and release nutrients), and their virulence in different infection models. Moreover, gray cells exhibit a level of mating competency that is intermediate between that of white and opaque cells. We further demonstrate that two key transcriptional regulators, Wor1 and Efg1, play central roles in the regulation of the “white-gray-opaque” tristable transitions. Our study reveals a multi-stable and heritable switching system, indicating that the adoption of distinct morphological forms in response to environmental change could be much more elaborate than previously thought.

Peter Sudbery, Neil Gow, Judith Berman (2004)
The human fungal pathogen, Candida albicans can grow in at least three different morphologies: yeast, pseudohyphae and hyphae. Further morphological forms exist during colony switching, for example, opaque phase cells are oblong, rather than the oval shape of yeast cells. Pseudohyphae and hyphae are both elongated and sometimes there has been little attempt to distinguish between them, as both are "filamentous forms" of the fungus. We review here the differences between them that suggest that they are distinct morphological states. We argue that studies on "filamentous forms" should always include a formal analysis to determine whether the cells are hyphae or pseudohyphae and we suggest some simple experimental criteria that can be applied to achieve this.

Daniel G. Miller, Matthew D. Johnson (2002)
Discovered over a decade ago, white-opaque switching in the human fungal pathogen Candida albicans is an alternation between two quasistable, heritable transcriptional states. Here, we show that white-opaque switching and sexual mating are both controlled by mating type locus homeodomain proteins and that opaque cells mate approximately 10(6) times more efficiently than do white cells. These results show that opaque cells are a mating-competent form of C. albicans and that this pathogen undergoes a white-to-opaque switch as a critical step in the mating process. As white cells are generally more robust in a mammalian host than are opaque cells, this strategy allows the organism to survive the rigors of life within a mammalian host, yet generate mating-competent cells.

Bernhard Hube, Julian Naglik, Stephen Challacombe (2003)
Candida albicans is the most common fungal pathogen of humans and has developed an extensive repertoire of putative virulence mechanisms that allows successful colonization and infection of the host under suitable predisposing conditions. Extracellular proteolytic activity plays a central role in Candida pathogenicity and is produced by a family of 10 secreted aspartyl proteinases (Sap proteins). Although the consequences of proteinase secretion during human infections is not precisely known, in vitro, animal, and human studies have implicated the proteinases in C. albicans virulence in one of the following seven ways: (i) correlation between Sap production in vitro and Candida virulence, (ii) degradation of human proteins and structural analysis in determining Sap substrate specificity, (iii) association of Sap production with other virulence processes of C. albicans, (iv) Sap protein production and Sap immune responses in animal and human infections, (v) SAP gene expression during Candida infections, (vi) modulation of C. albicans virulence by aspartyl proteinase inhibitors, and (vii) the use of SAP-disrupted mutants to analyze C. albicans virulence. Sap proteins fulfill a number of specialized functions during the infective process, which include the simple role of digesting molecules for nutrient acquisition, digesting or distorting host cell membranes to facilitate adhesion and tissue invasion, and digesting cells and molecules of the host immune system to avoid or resist antimicrobial attack by the host. We have critically discussed the data relevant to each of these seven criteria, with specific emphasis on how this proteinase family could contribute to Candida virulence and pathogenesis.