Relative Efficacy of Different Exercises for Pain, Function, Performance and Quality of Life in Knee and Hip Osteoarthritis: Systematic Review and Network Meta-Analysis 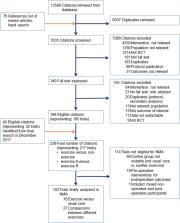 Guidelines recommend exercise as a core treatment for osteoarthritis (OA). However, it is unclear which type of exercise is most effective, leading to inconsistency between different recommendations.

The aim of this systematic review and network meta-analysis was to investigate the relative efficacy of different exercises (aerobic, mind–body, strengthening, flexibility/skill, or mixed) for improving pain, function, performance and quality of life (QoL) for knee and hip OA at, or nearest to, 8 weeks.

We searched nine electronic databases up until December 2017 for randomised controlled trials that compared exercise with usual care or with another exercise type. Bayesian network meta-analysis was used to estimate the relative effect size (ES) and corresponding 95% credibility interval (CrI) (PROSPERO registration: CRD42016033865).

The effect of exercise varies according to the type of exercise and target outcome. Aerobic or mind–body exercise may be the best for pain and function improvements. Strengthening and flexibility/skill exercises may be used for multiple outcomes. Mixed exercise is the least effective and the reason for this merits further investigation.

Years lived with disability (YLDs) for 1160 sequelae of 289 diseases and injuries 1990–2010: a systematic analysis for the Global Burden of Disease Study 2010

Theo Vos,  Abraham Flaxman,  Mohsen Naghavi … (2013)
Non-fatal health outcomes from diseases and injuries are a crucial consideration in the promotion and monitoring of individual and population health. The Global Burden of Disease (GBD) studies done in 1990 and 2000 have been the only studies to quantify non-fatal health outcomes across an exhaustive set of disorders at the global and regional level. Neither effort quantified uncertainty in prevalence or years lived with disability (YLDs). Of the 291 diseases and injuries in the GBD cause list, 289 cause disability. For 1160 sequelae of the 289 diseases and injuries, we undertook a systematic analysis of prevalence, incidence, remission, duration, and excess mortality. Sources included published studies, case notification, population-based cancer registries, other disease registries, antenatal clinic serosurveillance, hospital discharge data, ambulatory care data, household surveys, other surveys, and cohort studies. For most sequelae, we used a Bayesian meta-regression method, DisMod-MR, designed to address key limitations in descriptive epidemiological data, including missing data, inconsistency, and large methodological variation between data sources. For some disorders, we used natural history models, geospatial models, back-calculation models (models calculating incidence from population mortality rates and case fatality), or registration completeness models (models adjusting for incomplete registration with health-system access and other covariates). Disability weights for 220 unique health states were used to capture the severity of health loss. YLDs by cause at age, sex, country, and year levels were adjusted for comorbidity with simulation methods. We included uncertainty estimates at all stages of the analysis. Global prevalence for all ages combined in 2010 across the 1160 sequelae ranged from fewer than one case per 1 million people to 350,000 cases per 1 million people. Prevalence and severity of health loss were weakly correlated (correlation coefficient -0·37). In 2010, there were 777 million YLDs from all causes, up from 583 million in 1990. The main contributors to global YLDs were mental and behavioural disorders, musculoskeletal disorders, and diabetes or endocrine diseases. The leading specific causes of YLDs were much the same in 2010 as they were in 1990: low back pain, major depressive disorder, iron-deficiency anaemia, neck pain, chronic obstructive pulmonary disease, anxiety disorders, migraine, diabetes, and falls. Age-specific prevalence of YLDs increased with age in all regions and has decreased slightly from 1990 to 2010. Regional patterns of the leading causes of YLDs were more similar compared with years of life lost due to premature mortality. Neglected tropical diseases, HIV/AIDS, tuberculosis, malaria, and anaemia were important causes of YLDs in sub-Saharan Africa. Rates of YLDs per 100,000 people have remained largely constant over time but rise steadily with age. Population growth and ageing have increased YLD numbers and crude rates over the past two decades. Prevalences of the most common causes of YLDs, such as mental and behavioural disorders and musculoskeletal disorders, have not decreased. Health systems will need to address the needs of the rising numbers of individuals with a range of disorders that largely cause disability but not mortality. Quantification of the burden of non-fatal health outcomes will be crucial to understand how well health systems are responding to these challenges. Effective and affordable strategies to deal with this rising burden are an urgent priority for health systems in most parts of the world. Bill & Melinda Gates Foundation. Copyright © 2012 Elsevier Ltd. All rights reserved.

Body-mass index and incidence of cancer: a systematic review and meta-analysis of prospective observational studies.

Andrew G. Renehan,  Margaret Tyson,  Matthias Egger … (2008)
Excess bodyweight, expressed as increased body-mass index (BMI), is associated with the risk of some common adult cancers. We did a systematic review and meta-analysis to assess the strength of associations between BMI and different sites of cancer and to investigate differences in these associations between sex and ethnic groups. We did electronic searches on Medline and Embase (1966 to November 2007), and searched reports to identify prospective studies of incident cases of 20 cancer types. We did random-effects meta-analyses and meta-regressions of study-specific incremental estimates to determine the risk of cancer associated with a 5 kg/m2 increase in BMI. We analysed 221 datasets (141 articles), including 282,137 incident cases. In men, a 5 kg/m2 increase in BMI was strongly associated with oesophageal adenocarcinoma (RR 1.52, p<0.0001) and with thyroid (1.33, p=0.02), colon (1.24, p<0.0001), and renal (1.24, p <0.0001) cancers. In women, we recorded strong associations between a 5 kg/m2 increase in BMI and endometrial (1.59, p<0.0001), gallbladder (1.59, p=0.04), oesophageal adenocarcinoma (1.51, p<0.0001), and renal (1.34, p<0.0001) cancers. We noted weaker positive associations (RR <1.20) between increased BMI and rectal cancer and malignant melanoma in men; postmenopausal breast, pancreatic, thyroid, and colon cancers in women; and leukaemia, multiple myeloma, and non-Hodgkin lymphoma in both sexes. Associations were stronger in men than in women for colon (p<0.0001) cancer. Associations were generally similar in studies from North America, Europe and Australia, and the Asia-Pacific region, but we recorded stronger associations in Asia-Pacific populations between increased BMI and premenopausal (p=0.009) and postmenopausal (p=0.06) breast cancers. Increased BMI is associated with increased risk of common and less common malignancies. For some cancer types, associations differ between sexes and populations of different ethnic origins. These epidemiological observations should inform the exploration of biological mechanisms that link obesity with cancer.