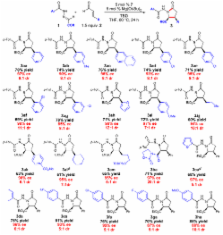 Enzymes are a continuing source of inspiration for the design of new chemical reactions that proceed with efficiency, high selectivity and minimal waste. In many biochemical processes, different catalytic species, such as Lewis acids and bases, are involved in precisely orchestrated interactions to activate reactants simultaneously or sequentially. Employing this type of cooperative catalysis, in which two or more catalytic cycles operate concurrently to achieve one overall transformation, has great potential to enhance known reactivity and drive the development of new chemical reactions with high value. In this disclosure, a cooperative N-heterocyclic carbene/Lewis acid catalytic system promotes the addition of homoenolate equivalents to hydrazones generating highly substituted γ-lactams in moderate to good yields and high levels of diastereo- and enantioselectivity.

Douglas W Stephan,  Gerhard Erker (2010)
Sterically encumbered Lewis acid and Lewis base combinations do not undergo the ubiquitous neutralization reaction to form "classical" Lewis acid/Lewis base adducts. Rather, both the unquenched Lewis acidity and basicity of such sterically "frustrated Lewis pairs (FLPs)" is available to carry out unusual reactions. Typical examples of frustrated Lewis pairs are inter- or intramolecular combinations of bulky phosphines or amines with strongly electrophilic RB(C(6)F(5))(2) components. Many examples of such frustrated Lewis pairs are able to cleave dihydrogen heterolytically. The resulting H(+)/H(-) pairs (stabilized for example, in the form of the respective phosphonium cation/hydridoborate anion salts) serve as active metal-free catalysts for the hydrogenation of, for example, bulky imines, enamines, or enol ethers. Frustrated Lewis pairs also react with alkenes, aldehydes, and a variety of other small molecules, including carbon dioxide, in cooperative three-component reactions, offering new strategies for synthetic chemistry.

Correspondence and requests for materials should be addressed to Karl A. Scheidt ( scheidt@ 123456northwestern.edu )