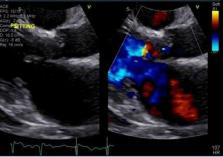 Atrial tachycardia after ablation of persistent atrial fibrillation: identification of the critical isthmus with a combination of multielectrode activation mapping and targeted entrainment mapping.

Swarnalatha Y Reddy,  M. Patel,  Petr Neuzil … (2008)
Atrial tachycardia (AT) that develops after ablation of atrial fibrillation often poses a more difficult clinical situation than the index arrhythmia. This study details the use of an impedance-based electroanatomic mapping system (Ensite NavX) in concert with a specialized multielectrode mapping catheter for rapid, high-density atrial mapping. In this study, this activation mapping was combined with entrainment mapping to eliminate ATs developing late after atrial fibrillation ablation. All study patients developed AT after ablation for atrial fibrillation. The approach to AT ablation consisted of 4 steps: use of a 20-pole penta-array catheter to map the chamber rapidly during the rhythm of interest, analysis of the patterns of atrial activation to identify wave fronts of electric propagation, targeted entrainment at putative channels, and catheter ablation at these "isthmuses." All ablations were performed with irrigated radiofrequency ablation catheters. Forty-one ATs were identified in 17 patients (2.4+/-1.6 ATs per patient). Using the multielectrode catheter in conjunction with the Ensite NavX system, we created activation maps of 33 of 41 ATs (81%) (mean cycle length, 284+/-71 seconds) with a mean of 365+/-108 points per map and an average mapping time of 8+/-3 minutes. Of the 33 mapped ATs, 7 terminated either spontaneously or during entrainment maneuvers. Radiofrequency energy was used to attempt ablation of 26 ATs; 25 of 26 of the ATs (96%) were terminated successfully by ablation or catheter pressure. This study demonstrates a strategy for rapidly defining and eliminating the scar-related ATs typically encountered after ablation of atrial fibrillation.

,  Otto Kamp,  P Dam … (2005)
This study was conducted to compare rate- and rhythm-control therapy in patients with persistent atrial fibrillation (AF) and mild to moderate chronic heart failure (CHF). Rate control is not inferior to rhythm control in preventing mortality and morbidity in patients with AF. In CHF, this issue is still unsettled. In this predefined analysis of the RACE study, a total of 261 patients were in New York Heart Association (NYHA) classes II and III at baseline. These patients were analyzed. The primary end point was a composite of cardiovascular mortality, hospitalization for CHF, thromboembolic complications, bleeding, pacemaker implantation, and life-threatening drug side effects. Furthermore, quality of life was compared. After 2.3 +/- 0.6 years, the primary end point occurred in 29 (22.3%) of the 130 rate-control patients and in 32 (24.4%) of the 131 rhythm-control patients. More cardiovascular deaths, hospitalization for CHF, and bleeding occurred under rate control. Thromboembolic complications, drug side effects, and pacemaker implantation were more frequent under rhythm control. Quality of life did not differ between strategies. In patients successfully treated with rhythm control, the prevalence of end points was not different from those who were in AF at study end. However, the type of end point was different: mortality, bleeding, hospitalization for heart failure, and pacemaker implantation occurred less frequently. In patients with mild to moderate CHF, rate control is not inferior to rhythm control. However, if sinus rhythm can be maintained, outcome may be improved. A prospective randomized trial is necessary to confirm these results.