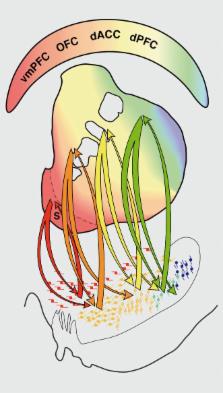 Corticostriatal connections play a central role in developing appropriate goal-directed behaviors, including the motivation and cognition to develop appropriate actions to obtain a specific outcome. The cortex projects to the striatum topographically. Thus, different regions of the striatum have been associated with these different functions: the ventral striatum with reward; the caudate nucleus with cognition; and the putamen with motor control. However, corticostriatal connections are more complex, and interactions between functional territories are extensive. These interactions occur in specific regions in which convergence of terminal fields from different functional cortical regions are found. This article provides an overview of the connections of the cortex to the striatum and their role in integrating information across reward, cognitive, and motor functions. Emphasis is placed on the interface between functional domains within the striatum.

Camillo Padoa-Schioppa,  John Assad (2006)
Economic choice is the behaviour observed when individuals select one among many available options. There is no intrinsically 'correct' answer: economic choice depends on subjective preferences. This behaviour is traditionally the object of economic analysis and is also of primary interest in psychology. However, the underlying mental processes and neuronal mechanisms are not well understood. Theories of human and animal choice have a cornerstone in the concept of 'value'. Consider, for example, a monkey offered one raisin versus one piece of apple: behavioural evidence suggests that the animal chooses by assigning values to the two options. But where and how values are represented in the brain is unclear. Here we show that, during economic choice, neurons in the orbitofrontal cortex (OFC) encode the value of offered and chosen goods. Notably, OFC neurons encode value independently of visuospatial factors and motor responses. If a monkey chooses between A and B, neurons in the OFC encode the value of the two goods independently of whether A is presented on the right and B on the left, or vice versa. This trait distinguishes the OFC from other brain areas in which value modulates activity related to sensory or motor processes. Our results have broad implications for possible psychological models, suggesting that economic choice is essentially choice between goods rather than choice between actions. In this framework, neurons in the OFC seem to be a good candidate network for value assignment underlying economic choice.

Striatonigrostriatal pathways in primates form an ascending spiral from the shell to the dorsolateral striatum.

Suzanne N Haber,  Julie L Fudge,  Nikolaus R. McFarland (2000)
Clinical manifestations in diseases affecting the dopamine system include deficits in emotional, cognitive, and motor function. Although the parallel organization of specific corticostriatal pathways is well documented, mechanisms by which dopamine might integrate information across different cortical/basal ganglia circuits are less well understood. We analyzed a collection of retrograde and anterograde tracing studies to understand how the striatonigrostriatal (SNS) subcircuit directs information flow between ventromedial (limbic), central (associative), and dorsolateral (motor) striatal regions. When viewed as a whole, the ventromedial striatum projects to a wide range of the dopamine cells and receives a relatively small dopamine input. In contrast, the dorsolateral striatum (DLS) receives input from a broad expanse of dopamine cells and has a confined input to the substantia nigra (SN). The central striatum (CS) receives input from and projects to a relatively wide range of the SN. The SNS projection from each striatal region contains three substantia nigra components: a dorsal group of nigrostriatal projecting cells, a central region containing both nigrostriatal projecting cells and its reciprocal striatonigral terminal fields, and a ventral region that receives a specific striatonigral projection but does not contain its reciprocal nigrostriatal projection. Examination of results from multiple tracing experiments simultaneously demonstrates an interface between different striatal regions via the midbrain dopamine cells that forms an ascending spiral between regions. The shell influences the core, the core influences the central striatum, and the central striatum influences the dorsolateral striatum. This anatomical arrangement creates a hierarchy of information flow and provides an anatomical basis for the limbic/cognitive/motor interface via the ventral midbrain.

Sarah Power,  Christina N. Lessov-Schlaggar,  Bradley L. Schlaggar … (2013)
Hubs integrate and distribute information in powerful ways due to the number and positioning of their contacts in a network. Several resting-state functional connectivity MRI reports have implicated regions of the default mode system as brain hubs; we demonstrate that previous degree-based approaches to hub identification may have identified portions of large brain systems rather than critical nodes of brain networks. We utilize two methods to identify hub-like brain regions: (1) finding network nodes that participate in multiple subnetworks of the brain, and (2) finding spatial locations in which several systems are represented within a small volume. These methods converge on a distributed set of regions that differ from previous reports on hubs. This work identifies regions that support multiple systems, leading to spatially constrained predictions about brain function that may be tested in terms of lesions, evoked responses, and dynamic patterns of activity. Copyright © 2013 Elsevier Inc. All rights reserved.

Department of Pharmacology and Physiology, Department of Neurobiology and Anatomy, University of Rochester School of Medicine, Rochester, New York, USA