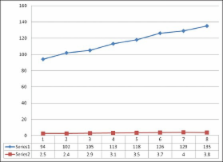 A 47-year-old male presented with hyponatremia that was corrected slowly as per the recommended guidelines. The patient improved initially but went on to develop a quadriparesis with a locked-in state due to a central as well as extrapontine myelinolysis and subsequently succumbed to an intercurrent infective illness. The patient had associated hypokalemia. Hyponatremia can result in central pontine myelinolysis even when the electrolyte disorder is treated slowly, and the concomitant hypokalemia seems to play a contributory role in the pathogenesis of the neurological disorder.

Richard Sterns,  J Riggs,  S Schochet (1986)
The treatment of hyponatremia is controversial: some authorities have cautioned that rapid correction causes central pontine myelinolysis, and others warn that severe hyponatremia has a high mortality rate unless it is corrected rapidly. Eight patients treated over a five-year period at our two institutions had a neurologic syndrome with clinical or pathological findings typical of central pontine myelinolysis, which developed after the patients presented with severe hyponatremia. Each patient's condition worsened after relatively rapid correction of hyponatremia (greater than 12 mmol of sodium per liter per day)--a phenomenon that we have called the osmotic demyelination syndrome. Five of the patients were treated at one hospital, and accounted for all the neurologic complications recorded among 60 patients with serum sodium concentrations below 116 mmol per liter; no patient in whom the sodium level was raised by less than 12 mmol per liter per day had any neurologic sequelae. Reviewing published reports on patients with very severe hyponatremia (serum sodium less than 106 mmol per liter) revealed that neurologic sequelae were associated with correction of hyponatremia by more than 12 mmol per liter per day; when correction proceeded more slowly, patients had uneventful recoveries. We suggest that the osmotic demyelination syndrome is a preventable complication of overly rapid correction of chronic hyponatremia.

Tara L. Brown (2000)
Focal symmetric demyelination in the central nervous system may be precipitated by aggressive correction of a hyper- or hypo-osmolar state and until recently has been associated with a high rate of morbidity and mortality. Specific anatomical locations are more susceptible to demyelination than others, although the mechanism of injury is unknown. Classic clinical and anatomical descriptions associated with a central pontine location have been supplemented by descriptions of patients with unusual symptoms associated with demyelinating lesions in extrapontine locations. The separation of patients with myelinolysis in central pontine and extrapontine locations is possible on the basis of clinical symptoms, and may direct specific pharmacological treatment. Patients at risk of central myelinolysis who are subjected to aggressive osmolar correction may be rescued with appropriate fluid management before brain injury has occurred; once injury is suspected on the basis of neurological symptoms, additional forms of intervention may still improve the outcome. Recent investigation of the molecular basis of the demyelinating process and the adaptive responses of the brain to dysosmolar challenge has allowed for the refinement of standard treatments and has made the osmotic demyelination syndrome a treatable condition with a better than expected prognosis.