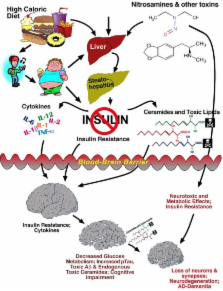 Alzheimer's disease [AD] is the most common cause of dementia in North America. Despite 30+ years of intense investigation, the field lacks consensus regarding the etiology and pathogenesis of sporadic AD, and therefore we still do not know the best strategies for treating and preventing this debilitating and costly disease. However, growing evidence supports the concept that AD is fundamentally a metabolic disease with substantial and progressive derangements in brain glucose utilization and responsiveness to insulin and insulin-like growth factor [IGF] stimulation. Moreover, AD is now recognized to be heterogeneous in nature, and not solely the end-product of aberrantly processed, misfolded, and aggregated oligomeric amyloid-beta peptides and hyperphosphorylated tau. Other factors, including impairments in energy metabolism, increased oxidative stress, inflammation, insulin and IGF resistance, and insulin/IGF deficiency in the brain should be incorporated into all equations used to develop diagnostic and therapeutic approaches to AD. Herein, the contributions of impaired insulin and IGF signaling to AD-associated neuronal loss, synaptic disconnection, tau hyperphosphorylation, amyloid-beta accumulation, and impaired energy metabolism are reviewed. In addition, we discuss current therapeutic strategies and suggest additional approaches based on the hypothesis that AD is principally a metabolic disease similar to diabetes mellitus. Ultimately, our ability to effectively detect, monitor, treat, and prevent AD will require more efficient, accurate and integrative diagnostic tools that utilize clinical, neuroimaging, biochemical, and molecular biomarker data. Finally, it is imperative that future therapeutic strategies for AD abandon the concept of uni-modal therapy in favor of multi-modal treatments that target distinct impairments at different levels within the brain insulin/IGF signaling cascades.

Dohoon Kim,  Minh Nguyen,  Matthew Dobbin … (2007)
A progressive loss of neurons with age underlies a variety of debilitating neurological disorders, including Alzheimer's disease (AD) and amyotrophic lateral sclerosis (ALS), yet few effective treatments are currently available. The SIR2 gene promotes longevity in a variety of organisms and may underlie the health benefits of caloric restriction, a diet that delays aging and neurodegeneration in mammals. Here, we report that a human homologue of SIR2, SIRT1, is upregulated in mouse models for AD, ALS and in primary neurons challenged with neurotoxic insults. In cell-based models for AD/tauopathies and ALS, SIRT1 and resveratrol, a SIRT1-activating molecule, both promote neuronal survival. In the inducible p25 transgenic mouse, a model of AD and tauopathies, resveratrol reduced neurodegeneration in the hippocampus, prevented learning impairment, and decreased the acetylation of the known SIRT1 substrates PGC-1alpha and p53. Furthermore, injection of SIRT1 lentivirus in the hippocampus of p25 transgenic mice conferred significant protection against neurodegeneration. Thus, SIRT1 constitutes a unique molecular link between aging and human neurodegenerative disorders and provides a promising avenue for therapeutic intervention.

Alzheimer's disease and senile dementia: loss of neurons in the basal forebrain.

D. Price,  Robert G. Struble,  Anthony Coyle … (1982)
Recent evidence indicates that the nucleus basalis of Meynert, a distinct population of basal forebrain neurons, is a major source of cholinergic innervation of the cerebral cortex. Postmortem studies have previously demonstrated profound reduction in the presynaptic markers for cholinergic neurons in the cortex of patients with Alzheimer's disease and senile dementia of the Alzheimer's type. The results of this study show that neurons of the nucleus basalis of Meynert undergo a profound (greater than 75 percent) and selective degeneration in these patients and provide a pathological substrate of the cholinergic deficiency in their brains. Demonstration of selective degeneration of such neurons represents the first documentation of a loss of a transmitter-specific neuronal population in a major disorder of higher cortical function and, as such, points to a critical subcortical lesion in Alzheimer's patients.

Charles Duyckaerts,  Benoît Delatour,  Marie-Claude Potier (2009)
The lesions of Alzheimer disease include accumulation of proteins, losses of neurons and synapses, and alterations related to reactive processes. Extracellular Abeta accumulation occurs in the parenchyma as diffuse, focal or stellate deposits. It may involve the vessel walls of arteries, veins and capillaries. The cases in which the capillary vessel walls are affected have a higher probability of having one or two apoepsilon 4 alleles. Parenchymal as well as vascular Abeta deposition follows a stepwise progression. Tau accumulation, probably the best histopathological correlate of the clinical symptoms, takes three aspects: in the cell body of the neuron as neurofibrillary tangle, in the dendrites as neuropil threads, and in the axons forming the senile plaque neuritic corona. The progression of tau pathology is stepwise and stereotyped from the entorhinal cortex, through the hippocampus, to the isocortex. The neuronal loss is heterogeneous and area-specific. Its mechanism is still discussed. The timing of the synaptic loss, probably linked to Abeta peptide itself, maybe as oligomers, is also controversial. Various clinico-pathological types of Alzheimer disease have been described, according to the type of the lesions (plaque only and tangle predominant), the type of onset (focal onset), the cause (genetic or sporadic) and the associated lesions (Lewy bodies, vascular lesions, hippocampal sclerosis, TDP-43 inclusions and argyrophilic grain disease).