Human Ovarian Reserve from Conception to the Menopause 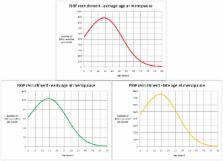 The human ovary contains a fixed number of non-growing follicles (NGFs) established before birth that decline with increasing age culminating in the menopause at 50–51 years. The objective of this study is to model the age-related population of NGFs in the human ovary from conception to menopause. Data were taken from eight separate quantitative histological studies (n = 325) in which NGF populations at known ages from seven weeks post conception to 51 years (median 32 years) were calculated. The data set was fitted to 20 peak function models, with the results ranked by obtained

= 0.95. We estimate that for 95% of women by the age of 30 years only 12% of their maximum pre-birth NGF population is present and by the age of 40 years only 3% remains. Furthermore, we found that the rate of NGF recruitment towards maturation for most women increases from birth until approximately age 14 years then decreases towards the menopause. To our knowledge, this is the first model of ovarian reserve from conception to menopause. This model allows us to estimate the number of NGFs present in the ovary at any given age, suggests that 81% of the variance in NGF populations is due to age alone, and shows for the first time, to our knowledge, that the rate of NGF recruitment increases from birth to age 14 years then declines with age until menopause. An increased understanding of the dynamics of human ovarian reserve will provide a more scientific basis for fertility counselling for both healthy women and those who have survived gonadotoxic cancer treatments.

The timing of normal puberty and the age limits of sexual precocity: variations around the world, secular trends, and changes after migration.

Jorma Toppari,  Grete Teilmann,  Jean Bourguignon … (2003)
During the past decade, possible advancement in timing of puberty has been reported in the United States. In addition, early pubertal development and an increased incidence of sexual precocity have been noticed in children, primarily girls, migrating for foreign adoption in several Western European countries. These observations are raising the issues of current differences and secular trends in timing of puberty in relation to ethnic, geographical, and socioeconomic background. None of these factors provide an unequivocal explanation for the earlier onset of puberty seen in the United States. In the formerly deprived migrating children, refeeding and catch-up growth may prime maturation. However, precocious puberty is seen also in some nondeprived migrating children. Attention has been paid to the changing milieu after migration, and recently, the possible role of endocrine- disrupting chemicals from the environment has been considered. These observations urge further study of the onset of puberty as a possible sensitive and early marker of the interactions between environmental conditions and genetic susceptibility that can influence physiological and pathological processes.

James Pru,  Jacqueline Tilly,  Jonathan L. Tilly … (2004)
A basic doctrine of reproductive biology is that most mammalian females lose the capacity for germ-cell renewal during fetal life, such that a fixed reserve of germ cells (oocytes) enclosed within follicles is endowed at birth. Here we show that juvenile and adult mouse ovaries possess mitotically active germ cells that, based on rates of oocyte degeneration (atresia) and clearance, are needed to continuously replenish the follicle pool. Consistent with this, treatment of prepubertal female mice with the mitotic germ-cell toxicant busulphan eliminates the primordial follicle reserve by early adulthood without inducing atresia. Furthermore, we demonstrate cells expressing the meiotic entry marker synaptonemal complex protein 3 in juvenile and adult mouse ovaries. Wild-type ovaries grafted into transgenic female mice with ubiquitous expression of green fluorescent protein (GFP) become infiltrated with GFP-positive germ cells that form follicles. Collectively, these data establish the existence of proliferative germ cells that sustain oocyte and follicle production in the postnatal mammalian ovary.

Bradley P. Knight,  Claire Glister (2006)
In recent years, exciting progress has been made towards unravelling the complex intraovarian control mechanisms that, in concert with systemic signals, coordinate the recruitment, selection and growth of follicles from the primordial stage through to ovulation and corpus luteum formation. A plethora of growth factors, many belonging to the transforming growth factor-beta (TGF-beta ) superfamily, are expressed by ovarian somatic cells and oocytes in a developmental, stage-related manner and function as intraovarian regulators of folliculogenesis. Two such factors, bone morphogenetic proteins, BMP-4 and BMP-7, are expressed by ovarian stromal cells and/or theca cells and have recently been implicated as positive regulators of the primordial-to-primary follicle transition. In contrast, evidence indicates a negative role for anti-Mullerian hormone (AMH, also known as Mullerian-inhibiting substance) of pre-granulosa/granulosa cell origin in this key event and subsequent progression to the antral stage. Two other TGF-beta superfamily members, growth and differentiation factor-9 (GDF-9) and BMP-15 (also known as GDF-9B) are expressed in an oocyte-specific manner from a very early stage and play key roles in promoting follicle growth beyond the primary stage; mice with null mutations in the gdf-9 gene or ewes with inactivating mutations in gdf-9 or bmp-15 genes are infertile with follicle development arrested at the primary stage. Studies on later stages of follicle development indicate positive roles for granulosa cell-derived activin, BMP-2, -5 and -6, theca cell-derived BMP-2, -4 and -7 and oocyte-derived BMP-6 in promoting granulosa cell proliferation, follicle survival and prevention of premature luteinization and/or atresia. Concomitantly, activin, TGF-beta and several BMPs may exert paracrine actions on theca cells to attenuate LH-dependent androgen production in small to medium-size antral follicles. Dominant follicle selection in monovular species may depend on differential FSH sensitivity amongst a growing cohort of small antral follicles. Changes in intrafollicular activins, GDF-9, AMH and several BMPs may contribute to this selection process by modulating both FSH- and IGF-dependent signalling pathways in granulosa cells. Activin may also play a positive role in oocyte maturation and acquisition of developmental competence. In addition to its endocrine role to suppress FSH secretion, increased output of inhibin by the selected dominant follicle(s) may upregulate LH-induced androgen secretion that is required to sustain a high level of oestradiol secretion during the pre-ovulatory phase. Advances in our understanding of intraovarian regulatory mechanisms should facilitate the development of new approaches for monitoring and manipulating ovarian function and improving fertility in domesticated livestock, endangered species and man.