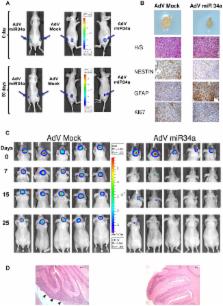 Through negative regulation of gene expression, microRNAs (miRNAs) can function as oncosuppressors in cancers, and can themselves show altered expression in various tumor types. Here, we have investigated medulloblastoma tumors (MBs), which arise from an early impairment of developmental processes in the cerebellum, where Notch signaling is involved in many of the cell-fate-determining stages. Notch regulates a subset of MB cells that have stem-cell-like properties and can promote tumor growth. On the basis of this evidence, we hypothesized that miRNAs targeting the Notch pathway can regulate these phenomena, and can be used in anti-cancer therapies.

In a screening of potential targets within Notch signaling, miR-34a was seen to be a regulator of the Notch pathway through its targeting of Notch ligand Delta-like 1 (Dll1). Down-regulation of Dll1 expression by miR-34a negatively regulates cell proliferation, and induces apoptosis and neural differentiation in MB cells. Using an inducible tetracycline on-off model of miR-34a expression, we show that in Daoy MB cells, Dll1 is the first target that is regulated in MB, as compared to the other targets analyzed here: Cyclin D1, cMyc and CDK4. MiR-34a expression negatively affects CD133 +/CD15 + tumor-propagating cells, then we assay through reverse-phase proteomic arrays, Akt and Stat3 signaling hypo-phosphorylation. Adenoviruses carrying the precursor miR-34a induce neurogenesis of tumor spheres derived from a genetic animal model of MB (Patch1 +/- p53 -/-), thus providing further evidence that the miR-34a/Dll1 axis controls both autonomous and non autonomous signaling of Notch. In vivo, miR-34a overexpression carried by adenoviruses reduces tumor burden in cerebellum xenografts of athymic mice, thus demonstrating an anti-tumorigenic role of miR-34a in vivo.

Despite advances in our understanding of the pathogenesis of MB, one-third of patients with MB remain incurable. Here, we show that stable nucleic-acid-lipid particles carrying mature miR-34a can target Dll1 in vitro and show equal effects to those of adenovirus miR-34a cell infection. Thus, this technology forms the basis for their therapeutic use for the delivery of miR-34a in brain-tumor treatment, with no signs of toxicity described to date in non-human primate trials.

Raphael Kopan,  Ma. Ilagan (2009)
Notch signaling regulates many aspects of metazoan development and tissue renewal. Accordingly, the misregulation or loss of Notch signaling underlies a wide range of human disorders, from developmental syndromes to adult-onset diseases and cancer. Notch signaling is remarkably robust in most tissues even though each Notch molecule is irreversibly activated by proteolysis and signals only once without amplification by secondary messenger cascades. In this Review, we highlight recent studies in Notch signaling that reveal new molecular details about the regulation of ligand-mediated receptor activation, receptor proteolysis, and target selection.

Nina Raver-Shapira,  Efi Marciano,  Eti Meiri … (2007)
p53 is a potent tumor suppressor, whose biological effects are largely due to its function as a transcriptional regulator. Here we report that, in addition to regulating the expression of hundreds of protein-coding genes, p53 also modulates the levels of microRNAs (miRNAs). Specifically, p53 can induce expression of microRNA-34a (miR-34a) in cultured cells as well as in irradiated mice, by binding to a perfect p53 binding site located within the gene that gives rise to miR-34a. Processing of the primary transcript into mature miR-34a involves the excision of a 30 kb intron. Notably, inactivation of miR-34a strongly attenuates p53-mediated apoptosis in cells exposed to genotoxic stress, whereas overexpression of miR-34a mildly increases apoptosis. Hence, miR-34a is a direct proapoptotic transcriptional target of p53 that can mediate some of p53's biological effects. Perturbation of miR-34a expression, as occurs in some human cancers, may thus contribute to tumorigenesis by attenuating p53-dependent apoptosis.

Ian MacLachlan,  Akin Akinc,  Hans-Peter Vornlocher … (2006)
The opportunity to harness the RNA interference (RNAi) pathway to silence disease-causing genes holds great promise for the development of therapeutics directed against targets that are otherwise not addressable with current medicines. Although there are numerous examples of in vivo silencing of target genes after local delivery of small interfering RNAs (siRNAs), there remain only a few reports of RNAi-mediated silencing in response to systemic delivery of siRNA, and there are no reports of systemic efficacy in non-rodent species. Here we show that siRNAs, when delivered systemically in a liposomal formulation, can silence the disease target apolipoprotein B (ApoB) in non-human primates. APOB-specific siRNAs were encapsulated in stable nucleic acid lipid particles (SNALP) and administered by intravenous injection to cynomolgus monkeys at doses of 1 or 2.5 mg kg(-1). A single siRNA injection resulted in dose-dependent silencing of APOB messenger RNA expression in the liver 48 h after administration, with maximal silencing of >90%. This silencing effect occurred as a result of APOB mRNA cleavage at precisely the site predicted for the RNAi mechanism. Significant reductions in ApoB protein, serum cholesterol and low-density lipoprotein levels were observed as early as 24 h after treatment and lasted for 11 days at the highest siRNA dose, thus demonstrating an immediate, potent and lasting biological effect of siRNA treatment. Our findings show clinically relevant RNAi-mediated gene silencing in non-human primates, supporting RNAi therapeutics as a potential new class of drugs.

Publisher ID: PONE-D-11-07916
DOI: 10.1371/journal.pone.0024584
PMC ID: 3171461
PubMed ID: 21931765
Copyright statement: de Antonellis et al. This is an open-access article distributed under the terms of the Creative Commons Attribution License, which permits unrestricted use, distribution, and reproduction in any medium, provided the original author and source are credited.