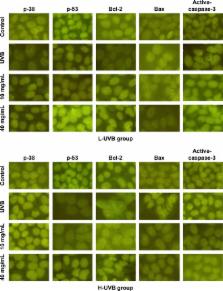 S. tridactyla Sch. Bip.-derived polysaccharides and flavones can reduce cell apoptosis to protect HaCaT cells from oxidative damage after UVB irradiation; however, this effect does not occur via the p38MAPK pathway.

Evolutionary diversifications of plants on the Qinghai-Tibetan Plateau

Zhao-jun Wen,  Jian-Qiang Zhang,  Ze-Long Nie … (2014)
The Qinghai-Tibetan Plateau (QTP) is the highest and one of the most extensive plateaus in the world. Phylogenetic, phylogeographic, and ecological studies support plant diversifications on the QTP through multiple mechanisms such as allopatric speciation via geographic isolation, climatic oscillations and divergences, pollinator-mediated isolation, diploid hybridization and introgression, and allopolyploidy. These mechanisms have driven spectacular radiations and/or species diversifications in various groups of plants such as Pedicularis L., Saussurea DC., Rhododendron L., Primula L., Meconopsis Vig., Rhodiola L., and many lineages of gymnosperms. Nevertheless, much work is needed toward understanding the evolutionary mechanisms of plant diversifications on the QTP. Well-sampled biogeographic analyses of the QTP plants in the broad framework of the Northern Hemisphere as well as the Southern Hemisphere are still relatively few and should be encouraged in the next decade. This paper reviews recent evidence from phylogenetic and biogeographic studies in plants, in the context of rapid radiations, mechanisms of species diversifications on the QTP, and the biogeographic significance of the QTP in the broader context of both the Northern and Southern Hemisphere biogeography. Integrative multidimensional analyses of phylogeny, morphological innovations, geography, ecology, development, species interactions and diversifications, and geology are needed and should shed insights into the patterns of evolutionary assembly and radiations in this fascinating region.

Deeba N. Syed,  Sami Sarfaraz,  Ji Hyang Kweon … (2006)
Solar UV radiation, in particular its UVB component, is the primary cause of many adverse biological effects, the most damaging of which is skin cancer. Here, we assessed the photochemopreventive effect of delphinidin, a major anthocyanidin present in many pigmented fruits and vegetables, on UVB-mediated responses in human immortalized HaCaT keratinocytes and SKH-1 hairless mouse skin. We found that pretreatment of cells with delphinidin (1-20 microM for 24 hours) protected against UVB (15-30 mJ/cm2, 24 hours)-mediated (i) decrease in cell viability and (ii) induction of apoptosis. Furthermore, we found that pretreatment of HaCaT cells with delphinidin inhibited UVB-mediated (i) increase in lipid peroxidation; (ii) formation of 8-hydroxy-2'-deoxyguanosine (8-OHdG); (iii) decrease in proliferating cell nuclear antigen expression; (iv) increase in poly(ADP-ribose) polymerase cleavage; (v) activation of caspases; (vi) increase in Bax; (vii) decrease in Bcl-2; (viii) upregulation of Bid and Bak; and (ix) downregulation of Bcl-xL. Topical application of delphinidin (1 mg/0.1 ml DMSO/mouse) to SKH-1 hairless mouse skin inhibited UVB-mediated apoptosis and markers of DNA damage such as cyclobutane pyrimidine dimers and 8-OHdG. Taken together our results suggest that treatment of HaCaT cells and mouse skin with delphinidin inhibited UVB-mediated oxidative stress and reduced DNA damage, thereby protecting the cells from UVB-induced apoptosis.

Adam Nabeebaccus,  Priscila C. L. B. Camargo,  Ajay Shah … (2014)
Reactive oxygen species (ROS) are produced during normal endoplasmic reticulum (ER) metabolism. There is accumulating evidence showing that under stress conditions such as ER stress, ROS production is increased via enzymes of the NADPH oxidase (Nox) family, especially via the Nox2 and Nox4 isoforms, which are involved in the regulation of blood pressure. Hypertension is a major contributor to cardiovascular and renal disease, and it has a complex pathophysiology involving the heart, kidney, brain, vessels, and immune system. ER stress activates the unfolded protein response (UPR) signaling pathway that has prosurvival and proapoptotic components. Here, we summarize the evidence regarding the association of Nox enzymes and ER stress, and its potential contribution in the setting of hypertension, including the role of other conditions that can lead to hypertension (e.g., insulin resistance and diabetes). A better understanding of this association is currently of great interest, as it will provide further insights into the cellular mechanisms that can drive the ER stress-induced adaptive versus maladaptive pathways linked to hypertension and other cardiovascular conditions. More needs to be learnt about the precise signaling regulation of Nox(es) and ER stress in the cardiovascular system. The development of specific approaches that target individual Nox isoforms and the UPR signaling pathway may be important for the achievement of therapeutic efficacy in hypertension.