The auditory representation of speech sounds in human motor cortex 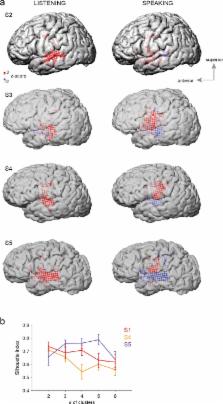 In humans, listening to speech evokes neural responses in the motor cortex. This has been controversially interpreted as evidence that speech sounds are processed as articulatory gestures. However, it is unclear what information is actually encoded by such neural activity. We used high-density direct human cortical recordings while participants spoke and listened to speech sounds. Motor cortex neural patterns during listening were substantially different than during articulation of the same sounds. During listening, we observed neural activity in the superior and inferior regions of ventral motor cortex. During speaking, responses were distributed throughout somatotopic representations of speech articulators in motor cortex. The structure of responses in motor cortex during listening was organized along acoustic features similar to auditory cortex, rather than along articulatory features as during speaking. Motor cortex does not contain articulatory representations of perceived actions in speech, but rather, represents auditory vocal information.

When we speak, we force air out of our lungs so that it passes over the vocal cords and causes them to vibrate. Movements of the jaw, lips and tongue can then shape the resulting sound wave into speech sounds. The brain’s outer layer, which is called the cortex, controls this process. More precisely, neighboring areas in the so-called motor cortex trigger the movements in a specific order to produce different sounds.

Brain imaging experiments have also shown that the motor cortex is active when we listen to speech, as well as when we produce it. One theory is that when we hear a sound, such as the consonant ‘b’, the sound activates the same areas of motor cortex as those involved in producing that sound. This could help us to recognize and understand the sounds we hear.

To test this theory, Cheung, Hamilton et al. studied how speech sounds activate the motor cortex by recording electrical signals directly from the brain’s surface in nine human volunteers who were undergoing a clinical evaluation for epilepsy surgery. This revealed that speaking activates many different areas of motor cortex. However, listening to the same sounds activates only a small subset of these areas. Contrary to what was thought, brain activity patterns in motor cortex during listening do not match those during speaking. Instead, they depend on the properties of the sounds. Thus, sounds that have similar acoustic properties but which require different movements to produce them, such as ‘b’ and ‘d’, activate the motor cortex in similar ways during listening, but not during speaking.

Further research is now needed to work out why the motor cortex behaves differently when we hear as opposed to when we speak. Previous work has suggested that the region increases its activity during listening when the sounds heard are unclear, for example because of background noise. One testable idea therefore is that the motor cortex helps to enhance the processing of degraded sounds.

Telmo Menezes,  Camille Roth (2017)
Human mobility is known to be distributed across several orders of magnitude of physical distances , which makes it generally difficult to endogenously find or define typical and meaningful scales. Relevant analyses, from movements to geographical partitions, seem to be relative to some ad-hoc scale, or no scale at all. Relying on geotagged data collected from photo-sharing social media, we apply community detection to movement networks constrained by increasing percentiles of the distance distribution. Using a simple parameter-free discontinuity detection algorithm, we discover clear phase transitions in the community partition space. The detection of these phases constitutes the first objective method of characterising endogenous, natural scales of human movement. Our study covers nine regions, ranging from cities to countries of various sizes and a transnational area. For all regions, the number of natural scales is remarkably low (2 or 3). Further, our results hint at scale-related behaviours rather than scale-related users. The partitions of the natural scales allow us to draw discrete multi-scale geographical boundaries, potentially capable of providing key insights in fields such as epidemiology or cultural contagion where the introduction of spatial boundaries is pivotal.

Active perception: sensorimotor circuits as a cortical basis for language.

Friedemann Pulvermüller,  Luciano Fadiga (2010)
Action and perception are functionally linked in the brain, but a hotly debated question is whether perception and comprehension of stimuli depend on motor circuits. Brain language mechanisms are ideal for addressing this question. Neuroimaging investigations have found specific motor activations when subjects understand speech sounds, word meanings and sentence structures. Moreover, studies involving transcranial magnetic stimulation and patients with lesions affecting inferior frontal regions of the brain have shown contributions of motor circuits to the comprehension of phonemes, semantic categories and grammar. These data show that language comprehension benefits from frontocentral action systems, indicating that action and perception circuits are interdependent.

N Crone (1998)
It has been shown in animals that neuronal activity in the 'gamma band' (>30 Hz) is associated with cortical activation and may play a role in multi-regional and multi-modal integration of cortical processing. Studies of gamma activity in human scalp EEG have typically focused on event-related synchronization (ERS) in the 40 Hz band. To assess further the gamma band ERS further, as an index of cortical activation and as a tool for human functional brain mapping, we recorded subdural electrocorticographic (ECoG) signals in five clinical subjects while they performed visual-motor decision tasks designed to activate the representations of different body parts in sensorimotor cortex. ECoG spectral analysis utilized a mixed-effects analysis of variance model in which within-trial temporal dependencies were accounted for. Taking an exploratory approach, we studied gamma ERS in 10-Hz-wide bands (overlapping by 5 Hz) ranging from 30 to 100 Hz, and compared these findings with changes in the alpha (8-13 Hz) and beta (15-25 Hz) bands. Gamma ERS (observed in three out of subjects) occurred in two broad bands-'low gamma' included the 35-45 and 40-50 Hz bands, and 'high gamma' the 75-85, 80-90, 85-95 and 90-100 Hz bands. The temporal and spatial characteristics of low and high gamma ERS were distinct, suggesting relatively independent neurophysiological mechanisms. Low gamma ERS often began after onset of the motor response and was sustained through much of it, in parallel with event-related desynchronization (ERD) in the alpha band. High gamma ERS often began during, or slightly before, the motor response and was transient, ending well before completion of the motor response. These temporal differences in low and high gamma suggest different functional associations with motor performance. Compared with alpha and beta ERD, the topographical patterns of low and high gamma ERS were more discrete and somatotopically specific and only occurred over contralateral sensorimotor cortex during unilateral limb movements (alpha and beta ERD were also observed ipsilaterally). Maps of sensorimotor function inferred from gamma ERS were consistent with maps generated by cortical electrical stimulation for clinical purposes. In addition, different task conditions in one subject produced consistent differences in both motor response latencies and onset latency of gamma ERS, particularly high gamma ERS. Compared with alpha and beta ERD, the topography of gamma ERS is more consistent with traditional maps of sensorimotor functional anatomy. In addition, gamma ERS may provide complementary information about cortical neurophysiology that is useful for mapping brain function in humans.