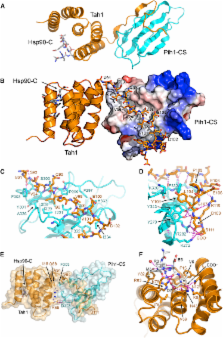 Client protein recruitment to the Hsp90 system depends on cochaperones that bind the client and Hsp90 simultaneously and facilitate their interaction. Hsp90 involvement in the assembly of snoRNPs, RNA polymerases, PI3-kinase-like kinases, and chromatin remodeling complexes depends on the TTT (Tel2-Tti1-Tti2), and R2TP complexes—consisting of the AAA-ATPases Rvb1 and Rvb2, Tah1 (Spagh/RPAP3 in metazoa), and Pih1 (Pih1D1 in humans)—that together provide the connection to Hsp90. The biochemistry underlying R2TP function is still poorly understood. Pih1 in particular, at the heart of the complex, has not been described at a structural level, nor have the multiple protein-protein interactions it mediates been characterized. Here we present a structural and biochemical analysis of Hsp90-Tah1-Pih1, Hsp90-Spagh, and Pih1D1-Tel2 complexes that reveal a domain in Pih1D1 specific for binding CK2 phosphorylation sites, and together define the structural basis by which the R2TP complex connects the Hsp90 chaperone system to the TTT complex. 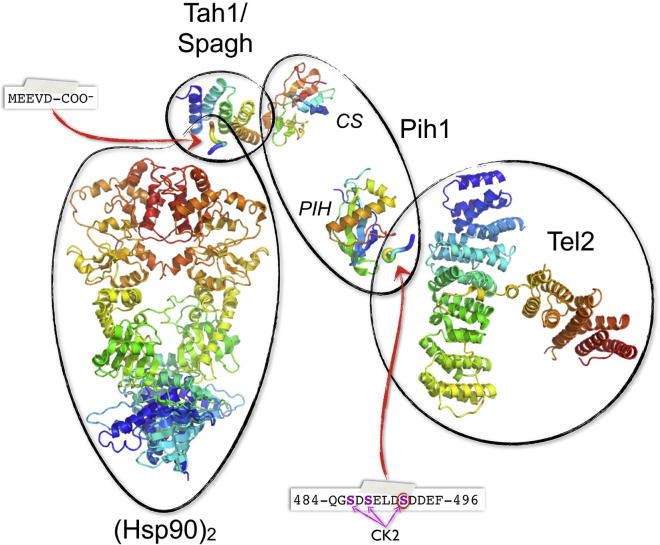 Structural and biochemical analyses of Hsp90-Tah1-Pih1, Hsp90-Spagh, and Pih1D1-Tel2 complexes reported by Pal et al. reveal a domain in Pih1D1 specific for binding CK2 phosphorylation sites and define the structural basis by which the R2TP complex connects the Hsp90 chaperone system to the TTT complex.

Evgeny Krissinel,  Kim Henrick (2007)
We discuss basic physical-chemical principles underlying the formation of stable macromolecular complexes, which in many cases are likely to be the biological units performing a certain physiological function. We also consider available theoretical approaches to the calculation of macromolecular affinity and entropy of complexation. The latter is shown to play an important role and make a major effect on complex size and symmetry. We develop a new method, based on chemical thermodynamics, for automatic detection of macromolecular assemblies in the Protein Data Bank (PDB) entries that are the results of X-ray diffraction experiments. As found, biological units may be recovered at 80-90% success rate, which makes X-ray crystallography an important source of experimental data on macromolecular complexes and protein-protein interactions. The method is implemented as a public WWW service.