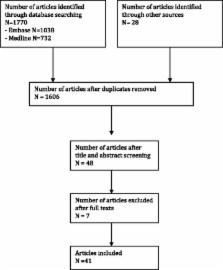 The applications for fat grafting have increased recently, within both regenerative and reconstructive surgery. Although fat harvesting, processing and injection techniques have been extensively studied and standardised, this has not had a big impact on the variability of outcome following fat grafting. This suggests a possible larger role of patient characteristics on adipocyte and adipose-derived stem cell (ADSC) viability and function. This systematic review aims to collate current evidence on the effect of patient factors on adipocyte and ADSC behaviour.

A systematic literature review was performed using MEDLINE, Cochrane Library and EMBASE. It includes outcomes observed in in vitro analyses, in vivo animal studies and clinical studies. Data from basic science work have been included in the discussion to enhance our understanding of the mechanism behind ADSC behaviour.

A total of 41 papers were included in this review. Accumulating evidence indicates decreased proliferation and differentiation potential of ADSCs with increasing age, body mass index, diabetes mellitus and exposure to radiotherapy and Tamoxifen, although this was not uniformly seen across all studies. Gender, donor site preference, HIV status and chemotherapy did not show a significant influence on fat retention. Circulating oestrogen levels have been shown to support both adipocyte function and graft viability. Evidence so far suggests no significant impact of total cholesterol, hypertension, renal disease, physical exercise and peripheral vascular disease on ADSC yield.

A more uniform comparison of all factors highlighted in this review, with the application of a combination of tests for each outcome measure, is essential to fully understand factors that affect adipocyte and ADSC viability, as well as functionality. As these patient factors interact, future studies looking at adipocyte viability need to take them into consideration for conclusions to be meaningful. This would provide crucial information for surgeons when deciding appropriate volumes of lipoaspirate to inject, improve patient selection, and counsel patient expectations with regards to outcomes and likelihood for repeat procedures. An improved understanding will also assist in identification of patient groups that would benefit from graft enrichment and cryopreservation techniques.

Endothelial progenitor cell dysfunction: a novel concept in the pathogenesis of vascular complications of type 1 diabetes.

Anton-Jan Zonneveld, Antoon Loomans, Ton Rabelink … (2003)
Type 1 diabetes is associated with reduced vascular repair, as indicated by impaired wound healing and reduced collateral formation in ischemia. Recently, endothelial progenitor cells (EPCs) have been identified as important regulators of these processes. We therefore explored the concept that EPCs are dysfunctional in diabetes. The number of EPCs obtained from type 1 diabetic patients in culture was 44% lower compared with age- and sex-matched control subjects (P < 0.001). This reduction was inversely related to levels of HbA(1c) (R = -0.68, P = 0.01). In addition, we demonstrated that patient EPCs were also impaired in function using an in vitro angiogenesis assay. Conditioned media from patient EPCs were significantly reduced in their capacity to support endothelial tube formation in comparison to control EPCs. Therefore, despite culturing the EPCs under normoglycemic conditions, functional differences between patient and control EPCs were maintained. Our findings demonstrate that adverse metabolic stress factors in type 1 diabetes are associated with reduced EPC numbers and angiogenicity. We hypothesize that EPC dysfunction contributes to the pathogenesis of vascular complications in type 1 diabetes.

R Shore, C Muirhead, Maria Aleman … (2012)
This report provides a review of early and late effects of radiation in normal tissues and organs with respect to radiation protection. It was instigated following a recommendation in Publication 103 (ICRP, 2007), and it provides updated estimates of 'practical' threshold doses for tissue injury defined at the level of 1% incidence. Estimates are given for morbidity and mortality endpoints in all organ systems following acute, fractionated, or chronic exposure. The organ systems comprise the haematopoietic, immune, reproductive, circulatory, respiratory, musculoskeletal, endocrine, and nervous systems; the digestive and urinary tracts; the skin; and the eye. Particular attention is paid to circulatory disease and cataracts because of recent evidence of higher incidences of injury than expected after lower doses; hence, threshold doses appear to be lower than previously considered. This is largely because of the increasing incidences with increasing times after exposure. In the context of protection, it is the threshold doses for very long follow-up times that are the most relevant for workers and the public; for example, the atomic bomb survivors with 40-50years of follow-up. Radiotherapy data generally apply for shorter follow-up times because of competing causes of death in cancer patients, and hence the risks of radiation-induced circulatory disease at those earlier times are lower. A variety of biological response modifiers have been used to help reduce late reactions in many tissues. These include antioxidants, radical scavengers, inhibitors of apoptosis, anti-inflammatory drugs, angiotensin-converting enzyme inhibitors, growth factors, and cytokines. In many cases, these give dose modification factors of 1.1-1.2, and in a few cases 1.5-2, indicating the potential for increasing threshold doses in known exposure cases. In contrast, there are agents that enhance radiation responses, notably other cytotoxic agents such as antimetabolites, alkylating agents, anti-angiogenic drugs, and antibiotics, as well as genetic and comorbidity factors. Most tissues show a sparing effect of dose fractionation, so that total doses for a given endpoint are higher if the dose is fractionated rather than when given as a single dose. However, for reactions manifesting very late after low total doses, particularly for cataracts and circulatory disease, it appears that the rate of dose delivery does not modify the low incidence. This implies that the injury in these cases and at these low dose levels is caused by single-hit irreparable-type events. For these two tissues, a threshold dose of 0.5Gy is proposed herein for practical purposes, irrespective of the rate of dose delivery, and future studies may elucidate this judgement further. Copyright © 2012. Published by Elsevier Ltd.

Obesity and the role of adipose tissue in inflammation and metabolism.

Andrew S. Greenberg, Martin S. Obin (2006)
Recent discoveries, notably of the hormones leptin and adiponectin, have revised the notion that adipocytes are simply a storage depot for body energy. Instead, adipocytes are also endocrine organs, with multiple metabolic roles in regulating whole-body physiology. Small adipocytes in lean individuals promote metabolic homeostasis; the enlarged adipocytes of obese individuals recruit macrophages and promote inflammation and the release of a range of factors that predispose toward insulin resistance. Exercise activates the AMP-activated protein kinase (AMPK) in muscle and other tissues, a pathway that increases fat oxidation and glucose transport. Importantly, the adipocyte hormones leptin and adiponectin also activate AMPK; remarkably, the same pathway is activated by certain antidiabetic agents such as thiazolidinediones. Increasingly, our understanding of the adipocyte as an endocrine organ is leading to new insights into obesity and health.