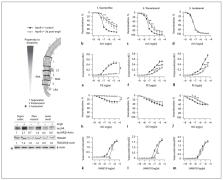 Aortic aneurysms and dissections are silent and lethal conditions, whose pathogenesis remains incompletely understood. Although angiotensin II (AngII)-infused ApoE−/− mice have been widely used to study aortic aneurysm and dissection, early morphofunctional alterations preceding the onset of these conditions remain unknown. The goal of this study was to unveil early morphofunctional changes underlying the onset of aneurysm and dissection. At 3 days post-AngII infusion, suprarenal abdominal aorta presented significant volumetric dilatation and microstructural damage. Ex vivo assessment of vascular reactivity of the suprarenal dissection-prone aorta and its side branches, showed an endothelial and contractile dysfunctions that were severe in the suprarenal aorta, moderate distally, and absent in the side branches, mirroring the susceptibility to dissection of these different vascular segments. Early and specific morphofunctional changes of the suprarenal aorta may contribute to the regional onset of aortic aneurysm and dissection by exacerbating the biomechanical burden arising from its side branches.

Lisa Cassis,  Alan Daugherty,  W Manning (2000)
Increased plasma concentrations of angiotension II (Ang II) have been implicated in atherogenesis. To examine this relationship directly, we infused Ang II or vehicle for 1 month via osmotic minipumps into mature apoE(-/-) mice. These doses of Ang II did not alter arterial blood pressure, body weight, serum cholesterol concentrations, or distribution of lipoprotein cholesterol. However, Ang II infusions promoted an increased severity of aortic atherosclerotic lesions. These Ang II-induced lesions were predominantly lipid-laden macrophages and lymphocytes; moreover, Ang II promoted a marked increase in the number of macrophages present in the adventitial tissue underlying lesions. Unexpectedly, pronounced abdominal aortic aneurysms were present in apoE(-/-) mice infused with Ang II. Sequential sectioning of aneurysmal abdominal aorta revealed two major characteristics: an intact artery that is surrounded by a large remodeled adventitia, and a medial break with pronounced dilation and more modestly remodeled adventitial tissue. Although no atherosclerotic lesions were visible at the medial break point, the presence of hyperlipidemia was required because infusions of Ang II into apoE(+/+) mice failed to generate aneurysms. These results demonstrate that increased plasma concentrations of Ang II have profound and rapid effects on vascular pathology when combined with hyperlipidemia, in the absence of hemodynamic influences.

Kiran Saraff,  Fjoralba Babamusta,  Lisa Cassis … (2003)
We sought to define the temporal characteristics of angiotensin II (AngII)-induced abdominal aortic aneurysms (AAAs) and to provide mechanistic insight into the development of this vascular pathology in apolipoprotein E-deficient (apoE-/-) mice. Male apoE-/- mice were infused with AngII for 1 to 56 days. Suprarenal arteries were sequentially sectioned, and cellular features were defined by histologic and immunocytochemical techniques. The initial identified event was medial accumulation of macrophages in regions of elastin degradation. Subsequent medial dissection was associated with luminal dilation and thrombus formation. Thrombi were usually constrained by adventitial tissue, although approximately 10% of mice died due to rupture. Thrombi led to profound inflammation that was characterized by infiltration of macrophages and T and B lymphocytes. Remodeling of the tissues was associated with regeneration of elastin fibers and reendothelialization of the dilated luminal surface. Aneurysmal tissue underwent profound neovascularization. Atherosclerotic lesions were only detected after development of the aneurysms. The initial event in AngII-induced AAA is a focal dissection in the suprarenal region. The progression of AAA precedes the development of overt atherosclerotic lesions.

Alan Daugherty,  Debra L. Rateri,  Israel F Charo … (2010)
AngII (angiotensin II) induces atherosclerosis and AAAs (abdominal aortic aneurysms) through multiple proposed mechanisms, including chemotaxis. Therefore, we determined the effects of whole-body deficiency of the chemokine receptor CCR2 (CC chemokine receptor 2) on these diseases. To meet this objective, apoE (apolipoprotein E)−/− mice that were either CCR2+/+ or CCR2−/−, were infused with either saline or AngII (1000 ng·kg−1 of body weight·min−1) for 28 days via mini-osmotic pumps. Deficiency of CCR2 markedly attenuated both atherosclerosis and AAAs, unrelated to systolic blood pressure or plasma cholesterol concentrations. During the course of the present study, we also observed that AngII infusion led to large dilatations that were restricted to the ascending aortic region of apoE−/− mice. The aortic media in most of the dilated area was thickened. In regions of medial thickening, distinct elastin layers were discernable. There was an expansion of the distance between elastin layers in a gradient from the intimal to the adventitial aspect of the media. This pathology differed in a circumscribed area of the anterior region of ascending aortas in which elastin breaks were focal and almost transmural. All regions of the ascending aorta of AngII-infused mice had diffuse medial macrophage accumulation. Deficiency of CCR2 greatly attenuated the AngII-induced lumen dilatation in the ascending aorta. This new model of ascending aortic aneurysms has pathology that differs markedly from AngII-induced atherosclerosis or AAAs, but all vascular pathologies were attenuated by CCR2 deficiency.

This article is licensed under the Creative Commons Attribution-NonCommercial-NoDerivatives 4.0 International License (CC BY-NC-ND) ( http://www.karger.com/Services/OpenAccessLicense). Usage and distribution for commercial purposes as well as any distribution of modified material requires written permission.