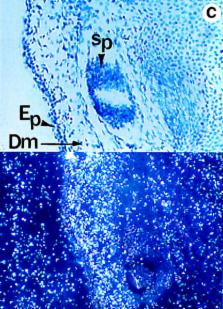 Lumican, a prototypic leucine-rich proteoglycan with keratan sulfate side chains, is a major component of the cornea, dermal, and muscle connective tissues. Mice homozygous for a null mutation in lumican display skin laxity and fragility resembling certain types of Ehlers-Danlos syndrome. In addition, the mutant mice develop bilateral corneal opacification. The underlying connective tissue defect in the homozygous mutants is deregulated growth of collagen fibrils with a significant proportion of abnormally thick collagen fibrils in the skin and cornea as indicated by transmission electron microscopy. A highly organized and regularly spaced collagen fibril matrix typical of the normal cornea is also missing in these mutant mice. This study establishes a crucial role for lumican in the regulation of collagen assembly into fibrils in various connective tissues. Most importantly, these results provide a definitive link between a necessity for lumican in the development of a highly organized collagenous matrix and corneal transparency.

E Korvatska,  D Schorderet,  L Zografos … (1997)
Granular dystrophy Groenouw type I (CDGG1), Reis-Bücklers (CDRB), lattice type I (CDL1) and Avellino (ACD) are four 5q31-linked human autosomal dominant corneal dystrophies. Clinically, they show progressive opacification of the cornea leading to severe visual handicap. The nature of the deposits remains unknown in spite of amyloid aetiology ascribed to the last two. We generated a YAC contig of the linked region and, following cDNA selection, recovered the beta ig-h3 gene. In six affected families we identified missense mutations. All detected mutations occurred at the CpG dinucleotide of two arginine codons: R555W in one CDGG1, R555Q in one CDRB, R124C in two CDL1 and R124H in two ACD families. This suggests, as the last two diseases are characterized by amyloid deposits, that R124 mutated kerato-epithelin (the product of beta ig-h3) forms amyloidogenic intermediates that precipitate in the cornea. Our data establish a common molecular origin for the 5q31-linked corneal dystrophies.

B Kobe,  J. Deisenhofer (2015)
Ribonuclease inhibitor is a cytoplasmic protein that tightly binds and inhibits ribonucleases of the pancreatic ribonuclease superfamily. The primary sequence of this inhibitor contains leucine-rich repeats (LRRs); these motifs are present in many proteins that participate in protein-protein interactions and have different functions and cellular locations. In vivo, ribonuclease inhibitor may have a role in the regulation of RNA turnover in mammalian cells and in angiogenesis. To define the structural features of LRR proteins and to understand better the nature of the tight interaction of ribonuclease inhibitor with ribonucleases, we have determined the crystal structure of the porcine inhibitor. To our knowledge, this is the first three-dimensional structure of a protein containing LRRs and represents a new class of alpha/beta protein fold. Individual repeats constitute beta-alpha structural units that probably also occur in other proteins containing LRRs. The non-globular shape of the structure and the exposed face of the parallel beta-sheet may explain why LRRs are used to achieve strong protein-protein interactions. A possible ribonuclease-binding region incorporates the surface formed by the parallel beta-sheet and the beta alpha loops.

Model structure of decorin and implications for collagen fibrillogenesis.

Alice I Weber,  Nicholas Harrison,  R Iozzo (1996)
The three-dimensional structure of human decorin, a secreted proteoglycan involved in the regulation of collagen fibrillogenesis and cellular growth, has been modeled based on the crystal structure of the porcine ribonuclease inhibitor. Both proteins contain leucine-rich repeats and share 18% identical residues. This model structure of decorin has an arch shape with the single glycosaminoglycan chain and the three N-linked oligosaccharides located on the same side of the molecule. Decorin was modeled as binding to a polar sequence of collagen type I found in the d band. The inner concave surface is the appropriate size and shape to accommodate only one collagen triple helix of approximately 3 nm in length. The binding of one collagen triple helix to decorin is proposed to play a major role in the formation of the staggered arrangement of collagen molecules within the microfibrils by preventing lateral fusion of collagen molecules.