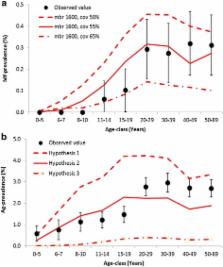 India has made great progress towards the elimination of lymphatic filariasis. By 2015, most endemic districts had completed at least five annual rounds of mass drug administration (MDA). The next challenge is to determine when MDA can be stopped. We performed a simulation study with the individual-based model LYMFASIM to help clarify this.

We used a model-variant for Indian settings. We considered different hypotheses on detectability of antigenaemia (Ag) in relation to underlying adult worm burden, choosing the most likely hypothesis by comparing the model predicted association between community-level microfilaraemia (Mf) and antigenaemia (Ag) prevalence levels to observed data (collated from literature). Next, we estimated how long MDA must be continued in order to achieve elimination in different transmission settings and what Mf and Ag prevalence may still remain 1 year after the last required MDA round. The robustness of key-outcomes was assessed in a sensitivity analysis.

Our model matched observed data qualitatively well when we assumed an Ag detection rate of 50 % for single worm infections, which increases with the number of adult worms (modelled by relating detection to the presence of female worms). The required duration of annual MDA increased with higher baseline endemicity and lower coverage (varying between 2 and 12 rounds), while the remaining residual infection 1 year after the last required treatment declined with transmission intensity. For low and high transmission settings, the median residual infection levels were 1.0 % and 0.4 % (Mf prevalence in the 5+ population), and 3.5 % and 2.0 % (Ag prevalence in 6–7 year-old children).

To achieve elimination in high transmission settings, MDA must be continued longer and infection levels must be reduced to lower levels than in low-endemic communities. Although our simulations were for Indian settings, qualitatively similar patterns are also expected in other areas. This should be taken into account in decision algorithms to define whether MDA can be interrupted. Transmission assessment surveys should ideally be targeted to communities with the highest pre-control transmission levels, to minimize the risk of programme failure.

Strategies and tools for the control/elimination of lymphatic filariasis.

Camilla Ottesen,  Amir Karam,  Charles B. Duke … (1996)
Lymphatic filariasis infects 120 million people in 73 countries worldwide and continues to be a worsening problem, especially in Africa and the Indian subcontinent. Elephantiasis, lymphoedema, and genital pathology afflict 44 million men, women and children; another 76 million have parasites in their blood and hidden internal damage to their lymphatic and renal systems. In the past, tools and strategies for the control of the condition were inadequate, but over the last 10 years dramatic research advances have led to new understanding about the severity and impact of the disease, new diagnostic and monitoring tools, and, most importantly, new treatment tools and control strategies. The new strategy aims both at transmission control through community-wide (mass) treatment programmes and at disease control through individual patient management. Annual single-dose co-administration of two drugs (ivermectin + diethylcarbamazine (DEC) or albendazole) reduces blood microfilariae by 99% for a full year; even a single dose of one drug (ivermectin or DEC) administered annually can result in 90% reductions; field studies confirm that such reduction of microfilarial loads and prevalence can interrupt transmission. New approaches to disease control, based on preventing bacterial superinfection, can now halt or even reverse the lymphoedema and elephantiasis sequelae of filarial infection. Recognizing these remarkable technical advances, the successes of recent control programmes, and the biological factors favouring elimination of this infection, the Fiftieth World Health Assembly recently called on WHO and its Member States to establish as a priority the global elimination of lymphatic filariasis as a public health problem.

The ICT Filariasis Test: A rapid-format antigen test for diagnosis of bancroftian filariasis.

James Weiss,  Gary Weil,  P. Lammie (1997)
Antigen testing is now recognized as the method of choice for detection of Wuchereria bancrofti infections. Unlike tests that detect microfilariae, antigen tests can be performed with blood collected during the day or night. However, existing enzyme-linked immunosorbent assay (ELISA) tests for filarial antigenemia are difficult to perform in the field, and this has limited their use in endemic countries. In this article, Gary Weil, Patrick Lammie and Niggi Weiss review their experience with a new rapid-format filarial antigen test. They found that the ICT card test was very easy to perform and that it was comparable with ELISA for the detection of filarial antigen in sera from people with microfilaremia. The introduction now of an antigen test suitable for use in the field is especially timely, in that it may facilitate implementation of new strategies proposed by the World Health Organization for control and elimination of lymphatic filariasis.