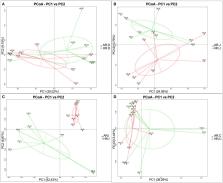 The gastrointestinal microbiota plays a pivotal role in maintaining animal health, immunity and reproductive performances. However, literature about the relationship between microbiota and reproductive performance is limited. The aim of the present study was to determine differences in the intestinal microbiota of broiler breeders with different egg laying rate. A total of 200 AA+ parent broiler breeders (41-week-old) were separated into two groups according to their different egg laying rate [average egg laying rate group (AR: 78.57 ± 0.20%) and high egg laying rate group (HR: 90.79 ± 0.43%). Feed conversion ratio (FCR), ovary cell apoptosis rate (ApoCR) and relative abdominal fat weight were lower ( p = 0.01), while the hatchability rate of qualified egg was higher ( p = 0.04) in HR group than that in AR group. Phascolarctobacterium abundance were lower ( p = 0.012) in ileum of HR birds. Romboutsia (genus) in ileum was negatively related to the feed efficiency ( r = −0.58, p < 0.05), Firmicutes (phylum) and Lactobacillus (genus) abundances in cecum were positively related to the egg laying rate (ELR) ( r = 0.35 and 0.48, p < 0.05), feed efficiency ( r = 0.42 and 0.43, p < 0.05), while Spirochaetes (phylum) and Sphaerochaeta (genus) abundances in cecum were negatively related to the ELR ( r = −0.43 and −0.70, p < 0.05), feed efficiency ( r = 0.54 and 0.48, p < 0.05), and positively related to ApoCR ( r = 0.46 and 0.47, p < 0.05). Our results suggested that microbiota, such as Firmicutes (phylum) and Lactobacillus (genus) have positive relationship, while Spirochaetes (phylum) and Romboutsia (genus) abundances exert negative relationship with broiler breeders' reproductive performances.

Qiong Wang, George Garrity, James Tiedje … (2007)
The Ribosomal Database Project (RDP) Classifier, a naïve Bayesian classifier, can rapidly and accurately classify bacterial 16S rRNA sequences into the new higher-order taxonomy proposed in Bergey's Taxonomic Outline of the Prokaryotes (2nd ed., release 5.0, Springer-Verlag, New York, NY, 2004). It provides taxonomic assignments from domain to genus, with confidence estimates for each assignment. The majority of classifications (98%) were of high estimated confidence (> or = 95%) and high accuracy (98%). In addition to being tested with the corpus of 5,014 type strain sequences from Bergey's outline, the RDP Classifier was tested with a corpus of 23,095 rRNA sequences as assigned by the NCBI into their alternative higher-order taxonomy. The results from leave-one-out testing on both corpora show that the overall accuracies at all levels of confidence for near-full-length and 400-base segments were 89% or above down to the genus level, and the majority of the classification errors appear to be due to anomalies in the current taxonomies. For shorter rRNA segments, such as those that might be generated by pyrosequencing, the error rate varied greatly over the length of the 16S rRNA gene, with segments around the V2 and V4 variable regions giving the lowest error rates. The RDP Classifier is suitable both for the analysis of single rRNA sequences and for the analysis of libraries of thousands of sequences. Another related tool, RDP Library Compare, was developed to facilitate microbial-community comparison based on 16S rRNA gene sequence libraries. It combines the RDP Classifier with a statistical test to flag taxa differentially represented between samples. The RDP Classifier and RDP Library Compare are available online at http://rdp.cme.msu.edu/.

Ruth E Ley, Fredrik Bäckhed, Peter James Turnbaugh … (2005)
We have analyzed 5,088 bacterial 16S rRNA gene sequences from the distal intestinal (cecal) microbiota of genetically obese ob/ob mice, lean ob/+ and wild-type siblings, and their ob/+ mothers, all fed the same polysaccharide-rich diet. Although the majority of mouse gut species are unique, the mouse and human microbiota(s) are similar at the division (superkingdom) level, with Firmicutes and Bacteroidetes dominating. Microbial-community composition is inherited from mothers. However, compared with lean mice and regardless of kinship, ob/ob animals have a 50% reduction in the abundance of Bacteroidetes and a proportional increase in Firmicutes. These changes, which are division-wide, indicate that, in this model, obesity affects the diversity of the gut microbiota and suggest that intentional manipulation of community structure may be useful for regulating energy balance in obese individuals. The sequences reported in this paper have been deposited in the GenBank database [accession nos. DQ 014552--DQ 015671 (mothers) and AY 989911--AY 993908 (offspring)].

This article was submitted to Animal Nutrition and Metabolism, a section of the journal Frontiers in Veterinary Science