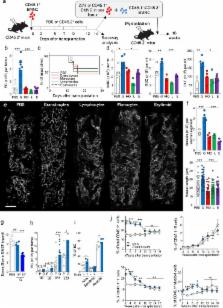 Christine Tertilt,  Steffen Jung,  Thorsten Buch … (2005)
A new system for lineage ablation is based on transgenic expression of a diphtheria toxin receptor (DTR) in mouse cells and application of diphtheria toxin (DT). To streamline this approach, we generated Cre-inducible DTR transgenic mice (iDTR) in which Cre-mediated excision of a STOP cassette renders cells sensitive to DT. We tested the iDTR strain by crossing to the T cell- and B cell-specific CD4-Cre and CD19-Cre strains, respectively, and observed efficient ablation of T and B cells after exposure to DT. In MOGi-Cre/iDTR double transgenic mice expressing Cre recombinase in oligodendrocytes, we observed myelin loss after intraperitoneal DT injections. Thus, DT crosses the blood-brain barrier and promotes cell ablation in the central nervous system. Notably, we show that the developing DT-specific antibody response is weak and not neutralizing, and thus does not impede the efficacy of DT. Our results validate the use of iDTR mice as a tool for cell ablation in vivo.

Daniel Link,  Jason Greenbaum,  Heide Eash … (2010)
Neutrophils are a major component of the innate immune response. Their homeostasis is maintained, in part, by the regulated release of neutrophils from the bone marrow. Constitutive expression of the chemokine CXCL12 by bone marrow stromal cells provides a key retention signal for neutrophils in the bone marrow through activation of its receptor, CXCR4. Attenuation of CXCR4 signaling leads to entry of neutrophils into the circulation through unknown mechanisms. We investigated the role of CXCR2-binding ELR+ chemokines in neutrophil trafficking using mouse mixed bone marrow chimeras reconstituted with Cxcr2(-/-) and WT cells. In this context, neutrophils lacking CXCR2 were preferentially retained in the bone marrow, a phenotype resembling the congenital disorder myelokathexis, which is characterized by chronic neutropenia. Additionally, transient disruption of CXCR4 failed to mobilize Cxcr2(-/-) neutrophils. However, neutrophils lacking both CXCR2 and CXCR4 displayed constitutive mobilization, showing that CXCR4 plays a dominant role in neutrophil trafficking. With regard to CXCR2 ligands, bone marrow endothelial cells and osteoblasts constitutively expressed the ELR+ chemokines CXCL1 and CXCL2, and CXCL2 expression was induced in endothelial cells during G-CSF-induced neutrophil mobilization. Collectively, these data suggest that CXCR2 signaling is a second chemokine axis that interacts antagonistically with CXCR4 to regulate neutrophil release from the bone marrow.