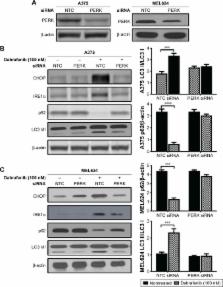 SMYD3 encodes a histone methyltransferase involved in the proliferation of cancer cells.

Yoichi Furukawa,  Juneo Silva,  Meihua Li … (2004)
Colorectal and hepatocellular carcinomas are some of the leading causes of cancer deaths worldwide, but the mechanisms that underly these malignancies are not fully understood. Here we report the identification of SMYD3, a gene that is over-expressed in the majority of colorectal carcinomas and hepatocellular carcinomas. Introduction of SMYD3 into NIH3T3 cells enhanced cell growth, whereas genetic knockdown with small-interfering RNAs (siRNAs) in cancer cells resulted in significant growth suppression. SMYD3 formed a complex with RNA polymerase II through an interaction with the RNA helicase HELZ and transactivated a set of genes that included oncogenes, homeobox genes and genes associated with cell-cycle regulation. SMYD3 bound to a motif, 5'-CCCTCC-3', present in the promoter region of downstream genes such as Nkx2.8. The SET domain of SMYD3 showed histone H3-lysine 4 (H3-K4)-specific methyltransferase activity, which was enhanced in the presence of the heat-shock protein HSP90A. Our findings suggest that SMYD3 has histone methyltransferase activity and plays an important role in transcriptional regulation as a member of an RNA polymerase complex. Furthermore, activation of SMYD3 may be a key factor in human carcinogenesis.

Ulrike Leiter,  Claus Garbe,  Thomas Eigentler (2013)
Melanoma and nonmelanoma skin cancer (NMSC) are now the most common types of cancer in white populations. Both tumor entities show an increasing incidence rate worldwide but a stable or decreasing mortality rate. NMSC is the most common cancer in white-skinned individuals with a worldwide increasing incidence. NMSC is an increasing problem for health care services worldwide which causes significant morbidity. The rising incidence rates of NMSC are probably caused by a combination of increased exposure to ultraviolet (UV) or sun light, increased outdoor activities, changes in clothing style, increased longevity, ozone depletion, genetics and in some cases, immune suppression. An intensive UV exposure in childhood and adolescence was causative for the development of basal cell carcinoma (BCC) whereas for the etiology of SCC a chronic UV exposure in the earlier decades was accused. Cutaneous melanoma is the most rapidly increasing cancer in white populations, in the last 3 decades incidence rates have risen up to 5-fold. In 2008 melanoma was on place 5 in women and on place 8 in men of the most common solid tumor entities in Germany. The frequency of its occurrence is closely associated with the constitutive color of the skin, and the geographical zone. Changes in outdoor activities and exposure to sunlight during the past 50 years are an important factor for the increasing incidence of melanoma. Mortality rates of melanoma show a stabilization in the USA, Australia and also in European countries. In contrast to SCC, melanoma risk seems to be associated with an intermittent exposure to sunlight. Prevention campaigns aim on reducing incidence and achieving earlier diagnosis, which resulted in an ongoing trend toward thin melanoma since the last two decades. However, the impact of primary prevention measures on incidence rates of melanoma is unlikely to be seen in the near future, rather increasing incidence rates to 40-50/100,000 inhabitants/year should be expected in Europe in the next decades.

A comprehensive glossary of autophagy-related molecules and processes.

Michael Thumm,  Ana Maria Cuervo,  Guido Kroemer … (2010)
Autophagy is a rapidly expanding field in the sense that our knowledge about the molecular mechanism and its connections to a wide range of physiological processes has increased substantially in the past decade. Similarly, the vocabulary associated with autophagy has grown concomitantly. This fact makes it difficult for readers, even those who work in the field, to keep up with the ever-expanding terminology associated with the various autophagy-related processes. Accordingly, we have developed a comprehensive glossary of autophagy-related terms that is meant to provide a quick reference for researchers who need a brief reminder of the regulatory effects of transcription factors or chemical agents that induce or inhibit autophagy, the function of the autophagy-related proteins, or the role of accessory machinery or structures that are associated with autophagy.