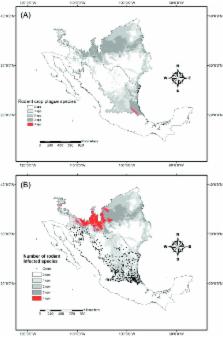 Leishmaniases are a group of important diseases transmitted to humans through the bite of sandfly vectors. Several forms of leishmaniases are endemic in Mexico and especially in the Southeast region. In the Northeastern region, however, there have only been isolated reports of cases and scanty records of sandfly vectors. The main objective of this study was to analyze the diversity of sandflies and potential reservoir hosts of Leishmania spp. in the states of Nuevo León and Tamaulipas. Species richness and abundances of sandflies and rodents were recorded. A fraction of the caught sandflies was analyzed by PCR to detect Leishmania spp. Tissues from captured rodents were also screened for infection. Ecological Niche Models (ENMs) were computed for species of rodent and their association with crop-growing areas. We found 13 species of sandflies, several of which are first records for this region. Medically important species such as Lutzomyia anthophora, Lutzomyia diabolica, Lutzomyia cruciata, and Lutzomyia shannoni were documented. Leishmania spp. infection was not detected in sandflies. Nine species of rodents were recorded, and Leishmania ( Leishmania) mexicana infection was found in four species of Peromyscus and Sigmodon. ENMs showed that potential distribution of rodent pest species overlaps with allocated crop areas. This shows that Leishmania ( L.) mexicana infection is present in the Northeastern region of Mexico, and that previously unrecorded sandfly species occur in the same areas. These findings suggest a potential risk of transmission of Leishmania ( L.) mexicana.

The checkerboard score and species distributions

Lewi Stone,  Alan Roberts (1990)
There has been an ongoing controversy over how to decide whether the distribution of species is "random" - i.e., whether it is not greatly different from what it would be if species did not interact. We recently showed (Roberts and Stone (1990)) that in the case of the Vanuatu (formerly New Hebrides) avifauna, the number of islands shared by species pairs was incompatible with a "random" null hypothesis. However, it was difficult to determine the causes or direction of the community's exceptionality. In this paper, the latter problem is examined further. We use Diamond's (1975) notion of checkerboard distributions (originally developed as an indicator of competition) and construct a C-score statistic which quantifies "checkerboardedness". This statistic is based on the way two species might colonise a pair of islands; whenever each species colonises a different island this adds 1 to the C-score. Following Connor and Simberloff (1979) we generate a "control group" of random colonisation patterns (matrices), and use the C-score to determine their checkerboard characteristics. As an alternative mode of enquiry, we make slight alterations to the observed data, repeating this process many times so as to obtain another "control group". In both cases, when we compare the observed data for the Vanuatu avifauna and the Antillean bat communities with that given by their respective "control group", we find that these communities have significantly large checkerboard distributions, making implausible the hypothesis that their species distributions are a product of random colonisation.

The Relation between Evenness and Diversity