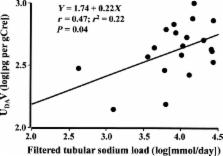 Deceleration capacity of heart rate as a predictor of mortality after myocardial infarction: cohort study.

Janos Peti-Peterdi,  P Darwin Bell,  David Warnock (2002)
Angiotensin II (AngII) helps to regulate overall renal tubular reabsorption of salt and water, yet its effects in the distal nephron have not been well studied. The purpose of these studies was to determine whether AngII stimulates luminal Na(+) transport in the cortical collecting duct (CCD). Intracellular Na(+) concentration ([Na(+)](i)), as a reflection of Na(+) transport across the apical membrane, was measured with fluorescence microscopy using sodium-binding benzofuran isophthalate (SBFI) in isolated, perfused CCD segments dissected from rabbit kidneys. Control [Na(+)](i), during perfusion with 25 mM NaCl and a Na(+)-free solution in the bath containing the Na(+)-ionophore monensin (10 microM, to eliminate basolateral membrane Na(+) transport) averaged 19.3 +/- 5.2 mM (n = 16). Increasing luminal [NaCl] to 150 mM elevated [Na(+)](i) by 9.87 +/- 1.5 mM (n = 7; P < 0.05). AngII (10(-9) M) added to the lumen significantly elevated baseline [Na(+)](i) by 6.3 +/- 1.0 mM and increased the magnitude (Delta = 25.2 +/- 3.7 mM) and initial rate ( approximately 5 fold) of change in [Na(+)](i) to increased luminal [NaCl]. AngII when added to the bath had similar stimulatory effects; however, AngII was much more effective from the lumen. Thus, AngII significantly increased the apical entry of Na(+) in the CCD. To determine if this apical entry step occurred via the epithelial Na(+) channel (ENaC), studies were performed using the specific ENaC blocker, benzamil hydrochloride (10(-6) M). When added to the perfusate, benzamil almost completely inhibited the elevations in [Na(+)](i) to increased luminal [NaCl] in both the presence and absence of AngII. These results suggest that AngII directly stimulates Na(+) channel activity in the CCD. AT(1) receptor blockade with candesartan or losartan (10(-6) M) prevented the stimulatory effects of AngII. Regulation of ENaC activity by AngII may play an important role in distal Na(+) reabsorption in health and disease.

E Féraille,  A Doucet (2000)
Tubular reabsorption of filtered sodium is quantitatively the main contribution of kidneys to salt and water homeostasis. The transcellular reabsorption of sodium proceeds by a two-step mechanism: Na(+)-K(+)-ATPase-energized basolateral active extrusion of sodium permits passive apical entry through various sodium transport systems. In the past 15 years, most of the renal sodium transport systems (Na(+)-K(+)-ATPase, channels, cotransporters, and exchangers) have been characterized at a molecular level. Coupled to the methods developed during the 1965-1985 decades to circumvent kidney heterogeneity and analyze sodium transport at the level of single nephron segments, cloning of the transporters allowed us to move our understanding of hormone regulation of sodium transport from a cellular to a molecular level. The main purpose of this review is to analyze how molecular events at the transporter level account for the physiological changes in tubular handling of sodium promoted by hormones. In recent years, it also became obvious that intracellular signaling pathways interacted with each other, leading to synergisms or antagonisms. A second aim of this review is therefore to analyze the integrated network of signaling pathways underlying hormone action. Given the central role of Na(+)-K(+)-ATPase in sodium reabsorption, the first part of this review focuses on its structural and functional properties, with a special mention of the specificity of Na(+)-K(+)-ATPase expressed in renal tubule. In a second part, the general mechanisms of hormone signaling are briefly introduced before a more detailed discussion of the nephron segment-specific expression of hormone receptors and signaling pathways. The three following parts integrate the molecular and physiological aspects of the hormonal regulation of sodium transport processes in three nephron segments: the proximal tubule, the thick ascending limb of Henle's loop, and the collecting duct.