About a Snail, a Toad, and Rodents: Animal Models for Adaptation Research 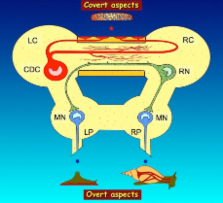 Neural adaptation mechanisms have many similarities throughout the animal kingdom, enabling to study fundamentals of human adaptation in selected animal models with experimental approaches that are impossible to apply in man. This will be illustrated by reviewing research on three of such animal models, viz. (1) the egg-laying behavior of a snail, Lymnaea stagnalis: how one neuron type controls behavior, (2) adaptation to the ambient light condition by a toad, Xenopus laevis: how a neuroendocrine cell integrates complex external and neural inputs, and (3) stress, feeding, and depression in rodents: how a neuronal network co-ordinates different but related complex behaviors. Special attention is being paid to the actions of neurochemical messengers, such as neuropeptide Y, urocortin 1, and brain-derived neurotrophic factor. While awaiting new technological developments to study the living human brain at the cellular and molecular levels, continuing progress in the insight in the functioning of human adaptation mechanisms may be expected from neuroendocrine research using invertebrate and vertebrate animal models.

Sex differences in HPA axis responses to stress: a review.

Limits to evolution at range margins: when and why does adaptation fail?

Andrew Bridle,  Timothy H Vines (2007)
What stops populations expanding into new territory beyond the edge of a range margin? Recent models addressing this problem have brought together population genetics and population ecology, and some have included interactions among species at range edges. Here, we review these models of adaptation at environmental or parapatric margins, and discuss the contrasting effects of migration in either swamping local adaptation, or supplying the genetic variation that is necessary for adaptation to continue. We illustrate how studying adaptation at range margins (both with and without hybridization) can provide insight into the genetic and ecological factors that limit evolution more generally, especially in response to current rates of environmental change.

Urocortin, a mammalian neuropeptide related to fish urotensin I and to corticotropin-releasing factor.

Szeman Chan,  J Vaughan,  J Bittencourt … (1995)
Corticotropin-releasing factor (CRF), a peptide first isolated from mammalian brain, is critical in the regulation of the pituitary-adrenal axis, and in complementary stress-related endocrine, autonomic and behavioural responses. Fish urotensin I and amphibian sauvagine were considered to be homologues of CRF until peptides even more closely related to CRF were identified in these same vertebrate classes. We have characterized another mammalian member of the CRF family and have localized its urotensin-like immunoreactivity to, and cloned related complementary DNAs from, a discrete rat midbrain region. The deduced protein encodes a peptide that we name urocortin, which is related to urotensin (63% sequence identity) and CRF (45% sequence identity). Synthetic urocortin evokes secretion of adrenocorticotropic hormone (ACTH) both in vitro and in vivo and binds and activates transfected type-1 CRF receptors, the subtype expressed by pituitary corticotropes. The coincidence of urotensin-like immunoreactivity with type-2 CRF receptors in brain, and our observation that urocortin is more potent than CRF at binding and activating type-2 CRF receptors, as well as at inducing c-Fos (an index of cellular activation) in regions enriched in type-2 CRF receptors, indicate that this new peptide could be an endogenous ligand for type-2 CRF receptors.