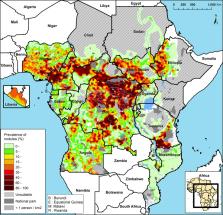 Onchocerciasis and lymphatic filariasis are targeted for elimination, primarily using mass drug administration at the country and community levels. Elimination of transmission is the onchocerciasis target and global elimination as a public health problem is the end point for lymphatic filariasis. Where program duration, treatment coverage, and compliance are sufficiently high, elimination is achievable for both parasites within defined geographic areas. However, transmission has re-emerged after apparent elimination in some areas, and in others has continued despite years of mass drug treatment. A critical question is whether this re-emergence and/or persistence of transmission is due to persistence of local parasites—i.e., the result of insufficient duration or drug coverage, poor parasite response to the drugs, or inadequate methods of assessment and/or criteria for determining when to stop treatment—or due to re-introduction of parasites via human or vector movement from another endemic area. We review recent genetics-based research exploring these questions in Onchocerca volvulus, the filarial nematode that causes onchocerciasis, and Wuchereria bancrofti, the major pathogen for lymphatic filariasis. We focus in particular on the combination of genomic epidemiology and genome-wide associations to delineate transmission zones and distinguish between local and introduced parasites as the source of resurgence or continuing transmission, and to identify genetic markers associated with parasite response to chemotherapy. Our ultimate goal is to assist elimination efforts by developing easy-to-use tools that incorporate genetic information about transmission and drug response for more effective mass drug distribution, surveillance strategies, and decisions on when to stop interventions to improve sustainability of elimination.

Adam J. Pritchard,  Matthew Stephens,  John P. Donnelly … (2001)
We describe a model-based clustering method for using multilocus genotype data to infer population structure and assign individuals to populations. We assume a model in which there are K populations (where K may be unknown), each of which is characterized by a set of allele frequencies at each locus. Individuals in the sample are assigned (probabilistically) to populations, or jointly to two or more populations if their genotypes indicate that they are admixed. Our model does not assume a particular mutation process, and it can be applied to most of the commonly used genetic markers, provided that they are not closely linked. Applications of our method include demonstrating the presence of population structure, assigning individuals to populations, studying hybrid zones, and identifying migrants and admixed individuals. We show that the method can produce highly accurate assignments using modest numbers of loci-e.g. , seven microsatellite loci in an example using genotype data from an endangered bird species. The software used for this article is available from http://www.stats.ox.ac.uk/ approximately pritch/home. html.

Discriminant analysis of principal components: a new method for the analysis of genetically structured populations

Thibaut Jombart,  Sébastien Devillard,  Francois Balloux (2010)
Background The dramatic progress in sequencing technologies offers unprecedented prospects for deciphering the organization of natural populations in space and time. However, the size of the datasets generated also poses some daunting challenges. In particular, Bayesian clustering algorithms based on pre-defined population genetics models such as the STRUCTURE or BAPS software may not be able to cope with this unprecedented amount of data. Thus, there is a need for less computer-intensive approaches. Multivariate analyses seem particularly appealing as they are specifically devoted to extracting information from large datasets. Unfortunately, currently available multivariate methods still lack some essential features needed to study the genetic structure of natural populations. Results We introduce the Discriminant Analysis of Principal Components (DAPC), a multivariate method designed to identify and describe clusters of genetically related individuals. When group priors are lacking, DAPC uses sequential K-means and model selection to infer genetic clusters. Our approach allows extracting rich information from genetic data, providing assignment of individuals to groups, a visual assessment of between-population differentiation, and contribution of individual alleles to population structuring. We evaluate the performance of our method using simulated data, which were also analyzed using STRUCTURE as a benchmark. Additionally, we illustrate the method by analyzing microsatellite polymorphism in worldwide human populations and hemagglutinin gene sequence variation in seasonal influenza. Conclusions Analysis of simulated data revealed that our approach performs generally better than STRUCTURE at characterizing population subdivision. The tools implemented in DAPC for the identification of clusters and graphical representation of between-group structures allow to unravel complex population structures. Our approach is also faster than Bayesian clustering algorithms by several orders of magnitude, and may be applicable to a wider range of datasets.

Some Demographic and Genetic Consequences of Environmental Heterogeneity for Biological Control

This article was submitted to Evolutionary and Genomic Microbiology, a section of the journal Frontiers in Genetics

This is an Open Access article published under the CC BY 3.0 IGO license which permits unrestricted use, distribution, and reproduction in any medium, provided the original work is properly cited. In any use of this article, there should be no suggestion that WHO endorses any specific organization, products, or services. The use of the WHO logo is not permitted. This notice should be preserved along with the article’s original URL.