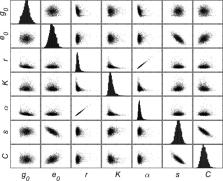 Estimation of Growth and Extinction Parameters for Endangered Species