Insights into the role of gut microbiota in obesity: pathogenesis, mechanisms, and therapeutic perspectives 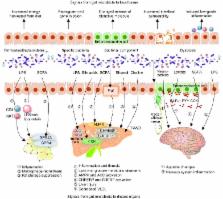 An obesity-associated gut microbiome with increased capacity for energy harvest.

Jeffrey Gordon,  Elaine R. Mardis,  Vincent Magrini … (2006)
The worldwide obesity epidemic is stimulating efforts to identify host and environmental factors that affect energy balance. Comparisons of the distal gut microbiota of genetically obese mice and their lean littermates, as well as those of obese and lean human volunteers have revealed that obesity is associated with changes in the relative abundance of the two dominant bacterial divisions, the Bacteroidetes and the Firmicutes. Here we demonstrate through metagenomic and biochemical analyses that these changes affect the metabolic potential of the mouse gut microbiota. Our results indicate that the obese microbiome has an increased capacity to harvest energy from the diet. Furthermore, this trait is transmissible: colonization of germ-free mice with an 'obese microbiota' results in a significantly greater increase in total body fat than colonization with a 'lean microbiota'. These results identify the gut microbiota as an additional contributing factor to the pathophysiology of obesity.

A core gut microbiome in obese and lean twins

Peter J. Turnbaugh,  Micah Hamady,  Tanya Yatsunenko … (2008)
The human distal gut harbors a vast ensemble of microbes (the microbiota) that provide us with important metabolic capabilities, including the ability to extract energy from otherwise indigestible dietary polysaccharides1–6. Studies of a small number of unrelated, healthy adults have revealed substantial diversity in their gut communities, as measured by sequencing 16S rRNA genes6–8, yet how this diversity relates to function and to the rest of the genes in the collective genomes of the microbiota (the gut microbiome) remains obscure. Studies of lean and obese mice suggest that the gut microbiota affects energy balance by influencing the efficiency of calorie harvest from the diet, and how this harvested energy is utilized and stored3–5. To address the question of how host genotype, environmental exposures, and host adiposity influence the gut microbiome, we have characterized the fecal microbial communities of adult female monozygotic and dizygotic twin pairs concordant for leanness or obesity, and their mothers. Analysis of 154 individuals yielded 9,920 near full-length and 1,937,461 partial bacterial 16S rRNA sequences, plus 2.14 gigabases from their microbiomes. The results reveal that the human gut microbiome is shared among family members, but that each person’s gut microbial community varies in the specific bacterial lineages present, with a comparable degree of co-variation between adult monozygotic and dizygotic twin pairs. However, there was a wide array of shared microbial genes among sampled individuals, comprising an extensive, identifiable ‘core microbiome’ at the gene, rather than at the organismal lineage level. Obesity is associated with phylum-level changes in the microbiota, reduced bacterial diversity, and altered representation of bacterial genes and metabolic pathways. These results demonstrate that a diversity of organismal assemblages can nonetheless yield a core microbiome at a functional level, and that deviations from this core are associated with different physiologic states (obese versus lean).

Jeffrey Gordon,  Samuel Klein,  Peter J. Turnbaugh … (2006)
Two groups of beneficial bacteria are dominant in the human gut, the Bacteroidetes and the Firmicutes. Here we show that the relative proportion of Bacteroidetes is decreased in obese people by comparison with lean people, and that this proportion increases with weight loss on two types of low-calorie diet. Our findings indicate that obesity has a microbial component, which might have potential therapeutic implications.