The effect of benzodiazepines on insomnia in patients with chronic obstructive pulmonary disease: a meta-analysis of treatment efficacy and safety 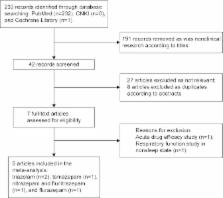 Insomnia is a common comorbidity associated with COPD. Although benzodiazepines (BZDs) can have adverse effects on respiratory response in COPD patients, these are the most common hypnotics. The aim of this study was to examine by meta-analysis the efficacy and safety of BZD to treat insomnia in COPD patients.

Electronic databases (PubMed, China National Knowledge Infrastructure, Cochrane clinical trials database) were searched. Studies were eligible if they compared the effects of BZD versus placebo on insomnia in COPD patients. Two reviewers extracted data independently. Disagreements were resolved by discussion with another reviewer until a consensus was achieved. Data that included objective and subjective sleep evaluation and respiratory function variables were extracted. Data were analyzed by the methods recommended by Review Manager 5.3 software.

In this meta-analysis, the results suggested BZDs might be efficient and safe hypnotics. Compared with placebo, BZD improved sleep quality partly, and significantly increased maximum transcutaneous carbon dioxide pressure during sleep. More randomized controlled trials are necessary to determine the potential effect of BZD in COPD patients with insomnia.

Benzodiazepine use and risk of dementia: prospective population based study

Sophie Billioti de Gage,  Bernard Bégaud,  Fabienne Bazin … (2012)
Objective To evaluate the association between use of benzodiazepines and incident dementia. Design Prospective, population based study. Setting PAQUID study, France. Participants 1063 men and women (mean age 78.2 years) who were free of dementia and did not start taking benzodiazepines until at least the third year of follow-up. Main outcome measures Incident dementia, confirmed by a neurologist. Results During a 15 year follow-up, 253 incident cases of dementia were confirmed. New use of benzodiazepines was associated with an increased risk of dementia (multivariable adjusted hazard ratio 1.60, 95% confidence interval 1.08 to 2.38). Sensitivity analysis considering the existence of depressive symptoms showed a similar association (hazard ratio 1.62, 1.08 to 2.43). A secondary analysis pooled cohorts of participants who started benzodiazepines during follow-up and evaluated the association with incident dementia. The pooled hazard ratio across the five cohorts of new benzodiazepine users was 1.46 (1.10 to 1.94). Results of a complementary nested case-control study showed that ever use of benzodiazepines was associated with an approximately 50% increase in the risk of dementia (adjusted odds ratio 1.55, 1.24 to 1.95) compared with never users. The results were similar in past users (odds ratio 1.56, 1.23 to 1.98) and recent users (1.48, 0.83 to 2.63) but reached significance only for past users. Conclusions In this prospective population based study, new use of benzodiazepines was associated with increased risk of dementia. The result was robust in pooled analyses across cohorts of new users of benzodiazepines throughout the study and in a complementary case-control study. Considering the extent to which benzodiazepines are prescribed and the number of potential adverse effects of this drug class in the general population, indiscriminate widespread use should be cautioned against.

P. Girodet,  C Raherison (2009)
Chronic obstructive pulmonary disease (COPD) is responsible for early mortality, high death rates and significant cost to health systems. The projection for 2020 indicates that COPD will be the third leading cause of death worldwide (from sixth in 1990) and fifth leading cause of years lost through early mortality or handicap (disability-adjusted life years) (12th in 1990). Active smoking remains the main risk factor, but other factors are becoming better known, such as occupational factors, infections and the role of air pollution. Prevalence of COPD varies according to country, age and sex. This disease is also associated with significant comorbidities. COPD is a disorder that includes various phenotypes, the continuum of which remains under debate. The major challenge in the coming years will be to prevent onset of smoking along with early detection of the disease in the general population.

The full terms of this license are available at https://www.dovepress.com/terms.php and incorporate the Creative Commons Attribution – Non Commercial (unported, v3.0) License ( http://creativecommons.org/licenses/by-nc/3.0/). By accessing the work you hereby accept the Terms. Non-commercial uses of the work are permitted without any further permission from Dove Medical Press Limited, provided the work is properly attributed