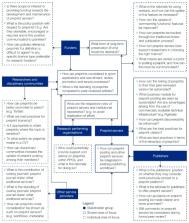 Background: Since 2013, there has been a dramatic increase in the number of preprint servers. Little is known about the position of researchers, funders, research performing organisations and other stakeholders with respect to this fast-paced landscape. In this article, we explore the perceived benefits and challenges of preprint posting, alongside issues including infrastructure and financial sustainability. We also discuss the definition of a ‘preprint’ in different communities, and the impact this has on uptake.

Methods: This study is based on 38 semi-structured interviews of key stakeholders, based on a purposive heterogeneous sampling approach and undertaken between October 2018 and January 2019. Interviewees were primarily drawn from biology, chemistry and psychology, where use of preprints is growing. Interviews were recorded, transcribed and subjected to thematic analysis to identify trends. Interview questions were designed based on Innovation Diffusion Theory, which was also used to interpret our results.

Results: Participants were conscious of the rising prominence of preprints and cited early and fast dissemination as their most appealing feature. Preprints were also considered to enable broader access to scientific literature and increased opportunities for informal commenting. The main concerns related to the lack of quality assurance and the ‘Ingelfinger rule’. We identified trust as an essential factor in preprint posting, and highlight the enabling role of Twitter in showcasing preprints.

Conclusions: The preprints landscape is evolving fast, and disciplinary communities are at different stages in the innovation diffusion process. The landscape is characterised by experimentation, which leads to the conclusion that a one-size-fits-all approach to preprints is not feasible. Cooperation and active engagement between the stakeholders involved will play an important role going forward. We share questions for the further development of the preprints landscape, with the most important being whether preprint posting will develop as a publisher- or researcher-centric practice.

Competing interests: Stephen Pinfield is a member of the F1000 Advisory Board and was the Founding Director of SHERPA between 2002 and 2012 (he has been involved since then in providing external advice to the service). A member of the F1000Research staff was interviewed in the course of this study but had no role in the writing or production of the article.

Competing interests: We are employed by ASAPbio, a non-profit organization working to promote the productive use of preprints in the life sciences.

Competing interests: We are employed by ASAPbio, a non-profit that promotes the productive use of preprints in the life sciences.

Funded by: Knowledge Exchange
This study has been funded by Knowledge Exchange (KE), a group of national organisations from six European countries supporting research infrastructure and services to enable the use of digital technologies to improve higher education and research: CSC in Finland, CNRS in France, DEFF in Denmark, DFG in Germany, Jisc in the UK and SURF in the Netherlands.