The impact of comorbid psychiatric disorders on methadone maintenance treatment in opioid use disorder: a prospective cohort study 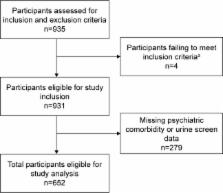 There is a significant interindividual variability in treatment outcomes in methadone maintenance treatment (MMT) for opioid use disorder (OUD). This prospective cohort study examines the impact of comorbid psychiatric disorders on continued illicit opioid use in patients receiving MMT for OUD.

Data were collected from 935 patients receiving MMT in outpatient clinics between June 2011 and June 2015. Using linear regression analysis, we evaluated the impact of having a comorbid psychiatric disorder on continued illicit opioid use during MMT, adjusting for important confounders. The main outcome measure was percentage of opioid-positive urine screens for 6 months. We conducted a subgroup analysis to determine the influence of specific comorbid psychiatric disorders, including substance use disorders, on continued illicit opioid use.

Approximately 80% of participants had at least one comorbid psychiatric disorder in addition to OUD, and 42% of participants had a comorbid substance use disorder. There was no significant association between having a psychiatric comorbidity and continuing opioid use ( P=0.248). Results from subgroup analysis, however, suggest that comorbid tranquilizer (β=20.781, P<0.001) and cocaine (β=6.344, P=0.031) use disorders are associated with increased rates of continuing opioid use.

Results from our study may serve to guide future MMT guidelines. Specifically, we find that cocaine or tranquilizer use disorder, comorbid with OUD, places patients at high risk for poor MMT outcomes. Treatment centers may choose to gear more intensive therapy toward such populations.

The Composite International Diagnostic Interview. An epidemiologic Instrument suitable for use in conjunction with different diagnostic systems and in different cultures.

L Robins, J. Wing, H Wittchen … (1988)
The Composite International Diagnostic Interview (CIDI), written at the request of the World Health Organization/US Alcohol, Drug Abuse, and Mental Health Administration Task Force on Psychiatric Assessment Instruments, combines questions from the Diagnostic Interview Schedule with questions designed to elicit Present State Examination items. It is fully structured to allow administration by lay interviewers and scoring of diagnoses by computer. A special Substance Abuse Module covers tobacco, alcohol, and other drug abuse in considerable detail, allowing the assessment of the quality and severity of dependence and its course. This article describes the design and development of the CIDI and the current field testing of a slightly reduced "core" version. The field test is being conducted in 19 centers around the world to assess the interviews' reliability and its acceptability to clinicians and the general populace in different cultures and to provide data on which to base revisions that may be found necessary. In addition, questions to assess International Classification of Diseases, ninth revision, and the revised DSM-III diagnoses are being written. If all goes well, the CIDI will allow investigators reliably to assess mental disorders according to the most widely accepted nomenclatures in many different populations and cultures.

Global burden of disease attributable to illicit drug use and dependence: findings from the Global Burden of Disease Study 2010.

Louisa Degenhardt, Harvey Whiteford, Alize J Ferrari … (2013)
No systematic attempts have been made to estimate the global and regional prevalence of amphetamine, cannabis, cocaine, and opioid dependence, and quantify their burden. We aimed to assess the prevalence and burden of drug dependence, as measured in years of life lived with disability (YLDs), years of life lost (YLLs), and disability-adjusted life years (DALYs). We conducted systematic reviews of the epidemiology of drug dependence, and analysed results with Global Burden of Diseases, Injuries, and Risk Factors Study 2010 (GBD 2010) Bayesian meta-regression technique (DisMod-MR) to estimate population-level prevalence of dependence and use. GBD 2010 calculated new disability weights by use of representative community surveys and an internet-based survey. We combined estimates of dependence with disability weights to calculate prevalent YLDs, YLLs, and DALYs, and estimated YLDs, YLLs, and DALYs attributable to drug use as a risk factor for other health outcomes. Illicit drug dependence directly accounted for 20·0 million DALYs (95% UI 15·3-25·4 million) in 2010, accounting for 0·8% (0·6-1·0) of global all-cause DALYs. Worldwide, more people were dependent on opioids and amphetamines than other drugs. Opioid dependence was the largest contributor to the direct burden of DALYs (9·2 million, 95% UI 7·1-11·4). The proportion of all-cause DALYs attributed to drug dependence was 20 times higher in some regions than others, with an increased proportion of burden in countries with the highest incomes. Injecting drug use as a risk factor for HIV accounted for 2·1 million DALYs (95% UI 1·1-3·6 million) and as a risk factor for hepatitis C accounted for 502,000 DALYs (286,000-891,000). Suicide as a risk of amphetamine dependence accounted for 854,000 DALYs (291,000-1,791,000), as a risk of opioid dependence for 671,000 DALYs (329,000-1,730,000), and as a risk of cocaine dependence for 324,000 DALYs (109,000-682,000). Countries with the highest rate of burden (>650 DALYs per 100,000 population) included the USA, UK, Russia, and Australia. Illicit drug use is an important contributor to the global burden of disease. Efficient strategies to reduce disease burden of opioid dependence and injecting drug use, such as delivery of opioid substitution treatment and needle and syringe programmes, are needed to reduce this burden at a population scale. Australian National Health and Medical Research Council, Australian Government Department of Health and Ageing, Bill & Melinda Gates Foundation. Copyright © 2013 Elsevier Ltd. All rights reserved.

A flood of opioids, a rising tide of deaths.