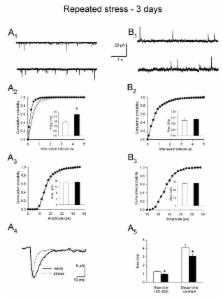 Corticotropin-releasing hormone (CRH)-synthesizing parvocellular neuroendocrine cells (PNCs) of the hypothalamic paraventricular nucleus (PVN) play a key role in the activation of the hypothalamic-pituitary-adrenocortical (HPA) axis. Several studies have demonstrated that synaptic inputs to these cells may undergo stress-related enhancement but, on the other hand, it has been reported that exposition to the same stressor for prolonged time periods may induce a progressive reduction in the response of the HPA axis to homotypic stressors. In the present study rats were subjected to 10 min restraint sessions, repeated twice daily for 3 or 7 days. Miniature excitatory and inhibitory postsynaptic currents (mEPSCs and mIPSCs) were then recorded from PNCs in ex vivo hypothalamic slice preparations obtained 24 h after the last restraint. Restraint stress repeated over 3 days resulted in increased mean frequency and decreased rise time and decay time constant of mEPSCs, accompanied by a decrease in the excitability of PNCs, however, no such changes were evident in slices obtained from rats subjected to restraint over 7 days. There were no changes in mIPSCs after repeated restraint. Administration of the unspecific nitric oxide synthase (NOS) blocker Nω-Nitro-L-arginine (L-NNA) before each restraint, repeated over 3 days, prevented the occurrence of an increase in mEPSC frequency. However, animals receiving L-NNA and subjected to repeated restraint had similar changes in PNCs membrane excitability and mEPSC kinetics as stressed rats not receiving L-NNA. Comparison of the effects of a single 10 min restraint session followed by either an immediate or delayed (24 h) decapitation revealed an increase in the mean mEPSC frequency and a decrease in the mean mIPSC frequency in slices prepared immediately after restraint, with no apparent effects when slice preparation was delayed by 24 h. These results demonstrate that restraint, lasting 10 min and repeated twice daily for 3 days, induces a selective and long-lasting enhancement of excitatory synaptic input onto PNCs, partially by a NOS-dependent mechanism, and reduces PNC excitability, whereas prolongation of repeated stress for up to 7 days results in an adaptation.

Nongenomic glucocorticoid inhibition via endocannabinoid release in the hypothalamus: a fast feedback mechanism.

Renato Malcher-Lopes,  Katalin Cs. Halmos,  S. Di Guida … (2003)
Glucocorticoid negative feedback in the brain controls stress, feeding, and neural-immune interactions by regulating the hypothalamic-pituitary-adrenal axis, but the mechanisms of inhibition of hypothalamic neurosecretory cells have never been elucidated. Using whole-cell patch-clamp recordings in an acute hypothalamic slice preparation, we demonstrate a rapid suppression of excitatory glutamatergic synaptic inputs to parvocellular neurosecretory neurons of the hypothalamic paraventricular nucleus (PVN) by the glucocorticoids dexamethasone and corticosterone. The effect was maintained with dexamethasone conjugated to bovine serum albumin and was not seen with direct intracellular glucocorticoid perfusion via the patch pipette, suggesting actions at a membrane receptor. The presynaptic inhibition of glutamate release by glucocorticoids was blocked by postsynaptic inhibition of G-protein activity with intracellular GDP-beta-S application, implicating a postsynaptic G-protein-coupled receptor and the release of a retrograde messenger. The glucocorticoid effect was not blocked by the nitric oxide synthesis antagonist N(G)-nitro-L-arginine methyl ester hydrochloride or by hemoglobin but was blocked completely by the CB1 cannabinoid receptor antagonists AM251 [N-(piperidin-1-yl)-5-(4-iodophenyl)-1-(2,4-dichlorophenyl)-4-methyl-1H-pyrazole-3-carboxamide] and AM281 [1-(2,4-dichlorophenyl)-5-(4-iodophenyl)-4-methyl-N-4-morpholinyl-1H-pyrazole-3-carboxamide] and mimicked and occluded by the cannabinoid receptor agonist WIN55,212-2 [(beta)-(+)-[2,3-dihydro-5-methyl-3-(4-morpholinylmethyl)pyrrolo[1,2,3-de]-1,4-benzoxazin-6-yl]-1-naphthalenylmethanone mesylate], indicating that it was mediated by retrograde endocannabinoid release. Several peptidergic subtypes of parvocellular neuron, identified by single-cell reverse transcripton-PCR analysis, were subject to rapid inhibitory glucocorticoid regulation, including corticotropin-releasing hormone-, thyrotropin-releasing hormone-, vasopressin-, and oxytocin-expressing neurons. Therefore, our findings reveal a mechanism of rapid glucocorticoid feedback inhibition of hypothalamic hormone secretion via endocannabinoid release in the PVN and provide a link between the actions of glucocorticoids and cannabinoids in the hypothalamus that regulate stress and energy homeostasis.

The mechanisms and functions of spontaneous neurotransmitter release.

Ege Kavalali (2014)
Fast synaptic communication in the brain requires synchronous vesicle fusion that is evoked by action potential-induced Ca(2+) influx. However, synaptic terminals also release neurotransmitters by spontaneous vesicle fusion, which is independent of presynaptic action potentials. A functional role for spontaneous neurotransmitter release events in the regulation of synaptic plasticity and homeostasis, as well as the regulation of certain behaviours, has been reported. In addition, there is evidence that the presynaptic mechanisms underlying spontaneous release of neurotransmitters and their postsynaptic targets are segregated from those of evoked neurotransmission. These findings challenge current assumptions about neuronal signalling and neurotransmission, as they indicate that spontaneous neurotransmission has an autonomous role in interneuronal communication that is distinct from that of evoked release.

NO as a signalling molecule in the nervous system.