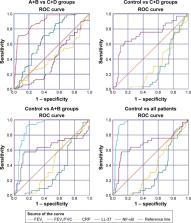 Antimicrobial peptides are effectors of host defence against infection and inflammation and can encourage wound repair.

The objectives of this study were to investigate the plasma antimicrobial peptide LL-37 and nuclear factor-kappaB (NF-κB) levels in patients with stable COPD compared with a control group and to highlight their importance in immune inflammation.

One hundred and thirty-eight stable COPD patients and 33 control subjects were enrolled in the study. The COPD patients were classified into four groups based on FEV 1 (groups I–IV) and also divided into “low-risk and high-risk” groups (groups A–B [low risk], C–D [high risk]).

Our study indicated that plasma LL-37 and NF-κB may play an important role in chronic immune inflammation. Decreased LL-37 levels may be particularly high risk for patients in stage IV disease. The role of LL-37 as a target for treatment of the immune system and COPD must be widely evaluated.

LL-37, the only human member of the cathelicidin family of antimicrobial peptides.

Ayyalusamy Ramamoorthy,  Ulrich H. N. Dürr,  U Sudheendra (2006)
Antimicrobial peptides and their precursor molecules form a central part of human and mammalian innate immunity. The underlying genes have been thoroughly investigated and compared for a considerable number of species, allowing for phylogenetic characterization. On the phenotypical side, an ever-increasing number of very varied and distinctive influences of antimicrobial peptides on the innate immune system are reported. The basic biophysical understanding of mammalian antimicrobial peptides, however, is still very limited. This is especially unsatisfactory since knowledge of structural properties will greatly help in the understanding of their immunomodulatory functions. The focus of this review article will be on LL-37, the only cathelicidin-derived antimicrobial peptide found in humans. LL-37 is a 37-residue, amphipathic, helical peptide found throughout the body and has been shown to exhibit a broad spectrum of antimicrobial activity. It is expressed in epithelial cells of the testis, skin, the gastrointestinal tract, and the respiratory tract, and in leukocytes such as monocytes, neutrophils, T cells, NK cells, and B cells. It has been found to have additional defensive roles such as regulating the inflammatory response and chemo-attracting cells of the adaptive immune system to wound or infection sites, binding and neutralizing LPS, and promoting re-epthelialization and wound closure. The article aims to report the known biophysical facts, with an emphasis on structural evidence, and to set them into relation with insights gained on phylogenetically related antimicrobial peptides in other species. The multitude of immuno-functional roles is only outlined. We believe that this review will aid the future work on the biophysical, biochemical and immunological investigations of this highly intriguing molecule.

Increased expression of nuclear factor-kappaB in bronchial biopsies from smokers and patients with COPD.

Nuclear localisation of p65 in sputum macrophages but not in sputum neutrophils during COPD exacerbations.