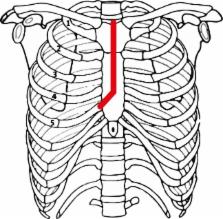 Over the last twenty years, minimally invasive aortic valve replacement (MIAVR) has evolved into a safe, well-tolerated and efficient surgical treatment option for aortic valve disease. It has been shown to reduce postoperative morbidity, providing faster recovery and rehabilitation, shorter hospital stay and better cosmetic results compared with conventional surgery. A variety of minimally invasive accesses have been developed and utilized to date. This concise review demonstrates and discusses surgical techniques used in contemporary approaches to MIAVR and presents the most important results of MIAVR procedures.

S Aranki,  D Rosborough,  G Couper … (1997)
This study compares the quality of valve replacement and repair performed through minimally invasive incisions as compared to the standard operation for aortic and mitral valve replacement. With the advent of minimally invasive laparoscopic approaches to orthopedic surgery, urology, general surgery, and thoracic surgery, it now is apparent that standard cardiac valve operations can be performed through very small incisions with similar approaches. Eighty-four patients underwent minimally invasive aortic (n = 41) and minimally invasive mitral valve repair and replacement (n = 43) between July 1996 and April 1997. Demographics, procedures, operative techniques, and postoperative morbidity and mortality were calculated, and a subset of the first 50 patients was compared to a 50-patient cohort who underwent the same operation through a conventional median sternotomy. Demographics, postoperative morbidity and mortality, patient satisfaction, and charges were compared. Of the 84 patients, there were 2 operative mortalities both in class IV aortic patients from multisystem organ failure. There was no operative mortality in the patients undergoing mitral valve replacement or repair. The operations were carried out with the same accuracy and attention to detail as with the conventional operation. There was minimal postoperative bleeding, cerebral vascular accidents, or other major morbidity. Groin cannulation complications primarily were related to atherosclerotic femoral arteries. A comparison of the minimally invasive to the conventional group, although operative time and ischemia time was higher in minimally invasive group, the requirement for erythrocytes was significantly less, patient satisfaction was significantly greater, and charges were approximately 20% less than those in the conventional group. Minimally invasive aortic and mitral valve surgery in patients without coronary disease can be done safely and accurately through small incisions. Patient satisfaction is up, return to normality is higher, and requirement for postrehabilitation services is less. In addition, the charges are approximately 20% less. These results serve as a paradigm for the future in terms of valve surgery in the managed care environment.

Ministernotomy versus conventional sternotomy for aortic valve replacement: a systematic review and meta-analysis.

Benjamin Cosgrove,  J Navia (1996)
A technique for mitral valve operations is described in which exposure is performed through a small right parasternal incision. Via a transseptal approach, excellent exposure to the mitral valve is obtained, allowing surgical correction of the diseased valve.

This is an Open Access article distributed under the terms of the Creative Commons Attribution-Noncommercial 3.0 Unported License, permitting all non-commercial use, distribution, and reproduction in any medium, provided the original work is properly cited.