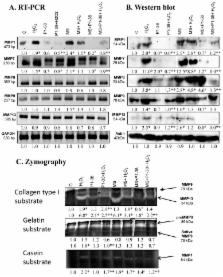 Pituitary adenylate cyclase activating polypeptide (PACAP) is an endogenous neuropeptide also secreted by non-neural cells, including chondrocytes. PACAP signaling is involved in the regulation of chondrogenesis, but little is known about its connection to matrix turnover during cartilage formation and under cellular stress in developing cartilage. We found that the expression and activity of hyaluronidases (Hyals), matrix metalloproteinases (MMP), and aggrecanase were permanent during the course of chondrogenesis in primary chicken micromass cell cultures, although protein levels changed daily, along with moderate and relatively constant enzymatic activity. Next, we investigated whether PACAP influences matrix destructing enzyme activity during oxidative and mechanical stress in chondrogenic cells. Exogenous PACAP lowered Hyals and aggrecanase expression and activity during cellular stress. Expression and activation of the majority of cartilage matrix specific MMPs such as MMP1, MMP7, MMP8, and MMP13, were also decreased by PACAP addition upon oxidative and mechanical stress, while the activity of MMP9 seemed not to be influenced by the neuropeptide. These results suggest that application of PACAP can help to preserve the integrity of the newly synthetized cartilage matrix via signaling mechanisms, which ultimately inhibit the activity of matrix destroying enzymes under cellular stress. It implies the prospect that application of PACAP can ameliorate articular cartilage destruction in joint diseases.

Isolation of a novel 38 residue-hypothalamic polypeptide which stimulates adenylate cyclase in pituitary cells.

Atsuro Miyata,  Akira Arimura,  Raymond R. Dahl … (1989)
A novel neuropeptide which stimulates adenylate cyclase in rat anterior pituitary cell cultures was isolated from ovine hypothalamic tissues. Its amino acid sequence was revealed as: His-Ser-Asp-Gly-Ile-Phe-Thr-Asp-Ser-Tyr-Ser-Arg-Tyr-Arg-Lys-Gln- Met-Ala- Val-Lys-Lys-Tyr-Leu-Ala-Ala-Val-Leu-Gly-Lys-Arg-Tyr-Lys-Gln-Arg-Val-Lys-Asn-Lys - NH2. The N-terminal sequence shows 68% homology with vasoactive intestinal polypeptide (VIP) but its adenylate cyclase stimulating activity was at least 1000 times greater than that of VIP. It increased release of growth hormone (GH), prolactin (PRL), corticotropin (ACTH) and luteinizing hormone (LH) from superfused rat pituitary cells at as small a dose as 10(-10)M (GH, PRL, ACTH) or 10(-9)M (LH). Whether these hypophysiotropic effects are the primary actions of the peptide or what physiological action in the pituitary is linked with the stimulation of adenylate cyclase by this peptide remains to be determined.

Panagiotis Lepetsos,  Athanasios G Papavassiliou (2016)
Osteoarthritis is the most common joint disorder with increasing prevalence due to aging of the population. Its multi-factorial etiology includes oxidative stress and the overproduction of reactive oxygen species, which regulate intracellular signaling processes, chondrocyte senescence and apoptosis, extracellular matrix synthesis and degradation along with synovial inflammation and dysfunction of the subchondral bone. As disease-modifying drugs for osteoarthritis are rare, targeting the complex oxidative stress signaling pathways would offer a valuable perspective for exploration of potential therapeutic strategies in the treatment of this devastating disease.