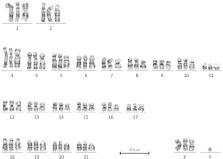 The aim of this study is to produce G-banded karyotypes of three dolphin species, Tursiops truncatus Montagu, 1821, Tursiops australis Charlton-Robb et al., 2011, and Grampus griseus Cuvier, 1812, and to determine if any differences between the species can be observed. Monolayer skin cultures were established and processed for chromosome study by trypsin banding. The results indicate that the three species here investigated have the same diploid number (2n = 44) and very similar gross chromosome morphology, however G-banding allows distinction between each species. Chromosome 1 in G. griseus is significantly different from the other 2 species, and chromosome 2 in T. australis is subtly different from the other 2 species. This result is of potential significance in taxonomic studies, and can provide an unequivocal answer in the assessment of suspected hybrids between these species.

Paul Hebert,  Erin H Penton,  John M Burns … (2004)
Astraptes fulgerator, first described in 1775, is a common and widely distributed neotropical skipper butterfly (Lepidoptera: Hesperiidae). We combine 25 years of natural history observations in northwestern Costa Rica with morphological study and DNA barcoding of museum specimens to show that A. fulgerator is a complex of at least 10 species in this region. Largely sympatric, these taxa have mostly different caterpillar food plants, mostly distinctive caterpillars, and somewhat different ecosystem preferences but only subtly differing adults with no genitalic divergence. Our results add to the evidence that cryptic species are prevalent in tropical regions, a critical issue in efforts to document global species richness. They also illustrate the value of DNA barcoding, especially when coupled with traditional taxonomic tools, in disclosing hidden diversity.

Kate Charlton-Robb,  Lisa-Ann Gershwin,  Ross Thompson … (2011)
Small coastal dolphins endemic to south-eastern Australia have variously been assigned to described species Tursiops truncatus, T. aduncus or T. maugeanus; however the specific affinities of these animals is controversial and have recently been questioned. Historically ‘the southern Australian Tursiops’ was identified as unique and was formally named Tursiops maugeanus but was later synonymised with T. truncatus. Morphologically, these coastal dolphins share some characters with both aforementioned recognised Tursiops species, but they also possess unique characters not found in either. Recent mtDNA and microsatellite genetic evidence indicates deep evolutionary divergence between this dolphin and the two currently recognised Tursiops species. However, in accordance with the recommendations of the Workshop on Cetacean Systematics, and the Unified Species Concept the use of molecular evidence alone is inadequate for describing new species. Here we describe the macro-morphological, colouration and cranial characters of these animals, assess the available and new genetic data, and conclude that multiple lines of evidence clearly indicate a new species of dolphin. We demonstrate that the syntype material of T. maugeanus comprises two different species, one of which is the historical ‘southern form of Tursiops’ most similar to T. truncatus, and the other is representative of the new species and requires formal classification. These dolphins are here described as Tursiops australis sp. nov., with the common name of ‘Burrunan Dolphin’ following Australian aboriginal narrative. The recognition of T. australis sp. nov. is particularly significant given the endemism of this new species to a small geographic region of southern and south-eastern Australia, where only two small resident populations in close proximity to a major urban and agricultural centre are known, giving them a high conservation value and making them susceptible to numerous anthropogenic threats.