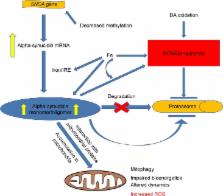 Alzheimer’s disease and Parkinson’s disease are two common neurodegenerative diseases of the elderly people that have devastating effects in terms of morbidity and mortality. The predominant form of the disease in either case is sporadic with uncertain etiology. The clinical features of Parkinson’s disease are primarily motor deficits, while the patients of Alzheimer’s disease present with dementia and cognitive impairment. Though neuronal death is a common element in both the disorders, the postmortem histopathology of the brain is very characteristic in each case and different from each other. In terms of molecular pathogenesis, however, both the diseases have a significant commonality, and proteinopathy (abnormal accumulation of misfolded proteins), mitochondrial dysfunction and oxidative stress are the cardinal features in either case. These three damage mechanisms work in concert, reinforcing each other to drive the pathology in the aging brain for both the diseases; very interestingly, the nature of interactions among these three damage mechanisms is very similar in both the diseases, and this review attempts to highlight these aspects. In the case of Alzheimer’s disease, the peptide amyloid beta (Aβ) is responsible for the proteinopathy, while α-synuclein plays a similar role in Parkinson’s disease. The expression levels of these two proteins and their aggregation processes are modulated by reactive oxygen radicals and transition metal ions in a similar manner. In turn, these proteins – as oligomers or in aggregated forms – cause mitochondrial impairment by apparently following similar mechanisms. Understanding the common nature of these interactions may, therefore, help us to identify putative neuroprotective strategies that would be beneficial in both the clinical conditions.

Impaired balance of mitochondrial fission and fusion in Alzheimer's disease.

Richard Morimoto (2008)
The long-term health of the cell is inextricably linked to protein quality control. Under optimal conditions this is accomplished by protein homeostasis, a highly complex network of molecular interactions that balances protein biosynthesis, folding, translocation, assembly/disassembly, and clearance. This review will examine the consequences of an imbalance in homeostasis on the flux of misfolded proteins that, if unattended, can result in severe molecular damage to the cell. Adaptation and survival requires the ability to sense damaged proteins and to coordinate the activities of protective stress response pathways and chaperone networks. Yet, despite the abundance and apparent capacity of chaperones and other components of homeostasis to restore folding equilibrium, the cell appears poorly adapted for chronic proteotoxic stress when conformationally challenged aggregation-prone proteins are expressed in cancer, metabolic disease, and neurodegenerative disease. The decline in biosynthetic and repair activities that compromises the integrity of the proteome is influenced strongly by genes that control aging, thus linking stress and protein homeostasis with the health and life span of the organism.