Safety and efficacy of the perioperative administration of recombinant human brain natriuretic peptide (rhBNP): a systematic review and meta-analysis 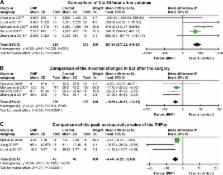 Retrospective studies and a meta-analysis were performed to evaluate the safety and effectiveness of the perioperative administration of recombinant human brain natriuretic peptide (rhBNP) during cardiac surgery under extracorporeal circulation.

Computerized literature searches were performed in Medline, Embase, The Cochrane Library, CNKI, CBM, and WANFANG to find randomized controlled trials (RCTs) related to the perioperative administration of rhBNP during cardiac surgery starting from the database inception until December 2016. Two researchers independently performed study screening, information extraction, and quality evaluation according to the inclusion/exclusion criteria, and a meta-analysis was performed using RevMan 5.2 software.

A total of 12 studies were analyzed, including 12 RCTs and 727 patients. The meta-analysis results indicated that the perioperative administration of rhBNP could reduce the occurrence rate of postoperative complications, length of intensive care unit (ICU) stay, length of hospital stay, and serum creatinine (Scr) levels, and increase the 24-hour urine volume; however, it did not affect the postoperative mortality rate.

The perioperative administration of rhBNP during cardiac surgery was safe and effective, and could improve the prognosis of the patients.

Mark T. Fahey,  B Beutler,  Ahmad R Hariri … (1986)
Cachectin (tumor necrosis factor), a protein produced in large quantities by endotoxin-activated macrophages, has been implicated as an important mediator of the lethal effect of endotoxin. Recombinant human cachectin was infused into rats in an effort to determine whether cachectin, by itself, can elicit the derangements of host physiology caused by administration of endotoxin. When administered in quantities similar to those produced endogenously in response to endotoxin, cachectin causes hypotension, metabolic acidosis, hemoconcentration, and death within minutes to hours, as a result of respiratory arrest. Hyperglycemia and hyperkalemia were also observed after infusion. At necropsy, diffuse pulmonary inflammation and hemorrhage were apparent on gross and histopathologic examination, along with ischemic and hemorrhagic lesions of the gastrointestinal tract, and acute renal tubular necrosis. Thus, it appears that a single protein mediator (cachectin) is capable of inducing many of the deleterious effects of endotoxin.