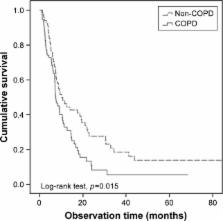 Focusing on the advanced non-small cell lung cancer (NSCLC) patients without driver mutations can elucidate the clinical impact of COPD on treatment outcomes. The present study evaluated the effects of COPD on the overall survival of driver mutation-negative NSCLC patients undergoing conventional chemotherapy as the first-line treatment.

Medical records of stage IIIB and IV NSCLC patients from January 2008 to December 2015 from six university hospitals were reviewed.

COPD had a negative impact on overall survival in the stage IV NSCLC and smoker NSCLC patients who underwent conventional chemotherapy.

LA Stewart,  JP Pignon (1995)
To evaluate the effect of cytotoxic chemotherapy on survival in patients with non-small cell lung cancer. Meta-analysis using updated data on individual patients from all available randomised trials, both published and unpublished. 9387 patients (7151 deaths) from 52 randomised clinical trials. Survival. The results for modern regimens containing cisplatin favoured chemotherapy in all comparisons and reached conventional levels of significance when used with radical radiotherapy and with supportive care. Trials comparing surgery with surgery plus chemotherapy gave a hazard ratio of 0.87 (13% reduction in the risk of death, equivalent to an absolute benefit of 5% at five years). Trials comparing radical radiotherapy with radical radiotherapy plus chemotherapy gave a hazard ratio of 0.87 (13% reduction in the risk of death; absolute benefit of 4% at two years), and trials comparing supportive care with supportive care plus chemotherapy 0.73 (27% reduction in the risk of death; 10% improvement in survival at one year). The essential drugs needed to achieve these effects were not identified. No difference in the size of effect was seen in any subgroup of patients. In all but the radical radiotherapy setting, older trials using long term alkylating agents tended to show a detrimental effect of chemotherapy. This effect reached conventional significance in the adjuvant surgical comparison. At the outset of this meta-analysis there was considerable pessimism about the role of chemotherapy in non-small cell lung cancer. These results offer hope of progress and suggest that chemotherapy may have a role in treating this disease.

M. Turner,  M Thun,  Daniel Krewski … (2007)
Several studies have suggested that previous lung disease may increase the risk of lung cancer. It is important to clarify the association between previous lung disease and lung cancer risk in the general population. The association between self-reported physician-diagnosed chronic bronchitis and emphysema and lung cancer mortality was examined in a U.S. prospective study of 448,600 lifelong nonsmokers who were cancer-free at baseline. During the 20-year follow-up period from 1982 to 2002, 1,759 lung cancer deaths occurred. Cox proportional hazards models were used to obtain adjusted hazard ratios (HRs) for lung cancer mortality associated with chronic bronchitis and emphysema as well as for both of these diseases together. Lung cancer mortality was significantly associated with both emphysema (HR, 1.66; 95% confidence interval [CI], 1.06, 2.59) and with the combined endpoint of emphysema and chronic bronchitis (HR, 2.44; 95% CI, 1.22, 4.90) in analyses that combined men and women. No association was observed with chronic bronchitis alone (HR, 0.96; 95% CI, 0.72, 1.28) in the overall analysis, although the association was stronger in men (HR, 1.59; 95% CI, 0.95, 2.66) than women (HR, 0.82; 95% CI, 0.58, 1.16; p for interaction, 0.04). The association between emphysema and lung cancer was stronger in analyses that excluded early years of follow-up. This large prospective study strengthens the evidence that increased lung cancer risk is associated with nonmalignant pulmonary conditions, especially emphysema, even in lifelong nonsmokers.