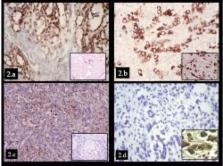 Fibrothecoma accounts for 3-4% of all ovarian neoplasms; it is usually hormonally inactive, but can be estrogenic or sometimes androgenic (11%); it is rare under 30 years. In a very few cases, minor sex cord elements (less than 10% of the tumor area) are present; therefore, it is considered as a separate subgroup of stromal tumors. The importance of immunohistochemistry in recognizing this kind of tumor has been fully documented, with variable results on inhibin staining, but specific positivity for calretenin in such cases. We report here the rare case of a 13-year-old child with ovarian fibrothecoma and minor sex cord stromal elements, who showed negativity for inhibin and positivity for calretenin.

Calretinin, a more sensitive but less specific marker than alpha-inhibin for ovarian sex cord-stromal neoplasms: an immunohistochemical study of 215 cases.

R E Scully,  Jian Zhang Quan,  J Arseneau … (1981)
Fifty ovarian stromal tumors that had a predominant pattern of fibroma or thecoma but also contained cells typical of steroid hormone-secreting cells are reported. Forty-six tumors were classified as luteinized thecomas because the steroid cells resembled lutein cells and lacked crystalloids of Reinke. Four were classified as stromal Leydig cell tumors because crystalloids were identified in the steroid cells. The luteinized thecomas occurred at an average age of 46 years and were associated with estrogenic manifestations in 50% and androgenic changes in 11% of the cases. In the remaining cases there was no clinical or pathological evidence of steroid hormone production at the time of diagnosis. Six patients, two of whom were virilized, were pregnant. Four tumors appeared malignant on histologic examination. One of these tumors was rapidly fatal, the outcome is unknown in a second case, the third patient is alive and well at 5 years, and the fourth tumor was diagnosed too recently for evaluation of its behavior. The stromal Leydig cell tumors occurred at an average age of 61 years and were associated with virilization in one case, endometrial hyperplasia in another case, and endometrial hyperplasia with carcinoma in a third case. The fourth tumor was unassociated with endocrine manifestations. Luteinized thecomas and stromal Leydig cell tumors are indistinguishable except for the presence of crystalloids of Reinke in the latter. In view of the prolonged search that is necessary to find these structures in some stromal Leydig cell tumors and their well-known absence in the majority of testicular Leydig cell tumors, it is reasonable to assume that an unknown proportion of tumors in the luteinized thecoma category are unrecognized stromal Leydig cell tumors.

Fibrosarcoma of the ovary arising in a fibrothecomatous tumor with minor sex cord elements. A Case report and review of the literature.