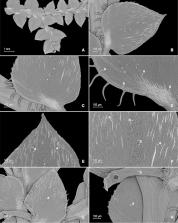 Five Selaginella species (i.e, S. gioiae , S. papillosa , S. pubimarginata , S. rostrata , and S. xanthoneura ) from Neotropical rainforests of South America are described and illustrated as new, while S. surucucusensis , originally recorded only from Brazil, is redefined to account for species’ morphological characters throughout its expanded distribution range and also a novel illustration is provided for it. Inferred taxonomic affinities and conservation assessment are offered for species here treated. Selaginella gioiae is native to Colombia, Ecuador, and Peru, and S. xanthoneura is so far only known in Colombia, whereas S. surucucusensis is now known to occur in Colombia and Venezuela in the north-central part of South America. These three species are included in the “ Selaginella flabellata group” based on their habit, stem shape, rhizophores position, and mega- and microspores color, and ornamentation. Selaginella papillosa , S. pubimarginata , and S. rostrata are native to Venezuela. Selaginella papillosa and S. pubimarginata morphologically belong in the “ Selaginella deltoides group” based on their habit, stem type, shape of lateral leaves and their indument type distributed on upper surface of the leaf lamina. On the other hand, S. rostrata is considered to be a member of the “ Selaginella microdonta group,” which is centered in the Guiana Highlands, based on its habit, stem type, and leaf size and shape, and for which a key to identify species is provided. Finally, all species threated here are classified in subg. Stachygynandrum based on their heteromorphic leaves, mostly quadrangular strobili, and monomorphic sporophylls shape (except for S. rostrata that has slightly dorsiventral and flattened strobili with somewhat heteromorphic sporophylls).

A subgeneric classification of Selaginella (Selaginellaceae)

Stina Weststrand,  Petra Korall (2016)
The lycophyte family Selaginellaceae includes approximately 750 herbaceous species worldwide, with the main species richness in the tropics and subtropics. We recently presented a phylogenetic analysis of Selaginellaceae based on DNA sequence data and, with the phylogeny as a framework, the study discussed the character evolution of the group focusing on gross morphology. Here we translate these findings into a new classification.

An analysis of the vegetative organs of Selaginella grandis Moore, together with some observations on abnormalities and experimental results.

University of Panama and National Research System of Panama