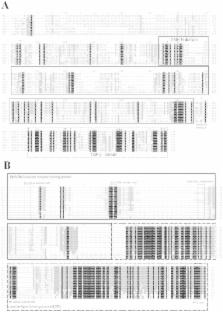 The full-length cDNAs of amh and dax1 in the hermaphrodite, rice-field eel ( Monopterus albus), were cloned and characterized in this study. Multiple sequence alignment revealed Dax1 was well conserved among vertebrates, whereas Amh had a low degree of similarity between different vertebrates. Their expression profiles in gonads during the course of sex inversion and tissues were investigated. The tissue distribution indicated amh was expressed mostly in gonads and was scarcely detectable in other tissues, whereas the expression of dax1 was widespread among the different tissues, especially liver and gonads. amh was scarcely detectable in ovaries whereas it was abundantly expressed in both ovotestis and testis. By contrast, dax1 was highly expressed in ovaries, especially in ♀IV (ovaries in IV stage), but it was decreased significantly in ♀/♂I (ovotestis in I stage). Its expression was increased again in ♀/♂III (ovotestis in III stage), and then decreased to a low level in testis. These significant different expression patterns of amh and dax1 suggest the increase of amh expression and the decline of dax1 expression are important for the activation of testis development, and the high level of amh and a low level of dax1 expression are necessary for maintenance of testis function.

N. Henriette Uhlenhaut,  Susanne Jakob,  Katrin Anlag … (2009)
In mammals, the transcription factor SRY, encoded by the Y chromosome, is normally responsible for triggering the indifferent gonads to develop as testes rather than ovaries. However, testis differentiation can occur in its absence. Here we demonstrate in the mouse that a single factor, the forkhead transcriptional regulator FOXL2, is required to prevent transdifferentiation of an adult ovary to a testis. Inducible deletion of Foxl2 in adult ovarian follicles leads to immediate upregulation of testis-specific genes including the critical SRY target gene Sox9. Concordantly, reprogramming of granulosa and theca cell lineages into Sertoli-like and Leydig-like cell lineages occurs with testosterone levels comparable to those of normal XY male littermates. Our results show that maintenance of the ovarian phenotype is an active process throughout life. They might also have important medical implications for the understanding and treatment of some disorders of sexual development in children and premature menopause in women.

John H Postlethwait,  R Bremiller,  Catherine Wilson … (2005)
The role of Anti-Müllerian hormone (Amh) during gonad development has been studied extensively in mammals, but is less well understood in other vertebrates. In male mammalian embryos, Sox9 activates expression of Amh, which initiates the regression of the Mullerian ducts and inhibits the expression of aromatase (Cyp19a1), the enzyme that converts androgens to estrogens. To better understand shared features of vertebrate gonadogenesis, we cloned amh cDNA from zebrafish, characterized its genomic structure, mapped it, analyzed conserved syntenies, studied its expression pattern in embryos, larvae, juveniles, and adults, and compared it to the expression patterns of sox9a, sox9b and cyp19a1a. We found that the onset of amh expression occurred while gonads were still undifferentiated and sox9a and cyp19a1a were already expressed. In differentiated gonads of juveniles, amh showed a sexually dimorphic expression pattern. In 31 days post-fertilization juveniles, testes expressed amh and sox9a, but not cyp19a1a, while ovaries expressed cyp19a1a and sox9b, but not amh. In adult testes, amh and sox9a were expressed in presumptive Sertoli cells. In adult ovaries, amh and cyp19a1a were expressed in granulosa cells surrounding the oocytes, and sox9b was expressed in a complementary fashion in the ooplasm of oocytes. The observed expression patterns of amh, sox9a, sox9b, and cyp19a1a in zebrafish correspond to the patterns expected if their regulatory interactions have been conserved with mammals. The finding that zebrafish sox9b and sox8 were not co-expressed with amh in oocytes excludes the possibility that amh expression in zebrafish granulosa cells is directly regulated by either of these two genes.

Isolation of the bovine and human genes for Müllerian inhibiting substance and expression of the human gene in animal cells.

Thomas Cate,  C Hession,  N Farber … (1986)
We have isolated the bovine and human genes for Müllerian inhibiting substance (MIS), a testicular glycoprotein that causes regression of the Müllerian duct during development of the male embryo. The mRNA sequence of bovine MIS, determined from an analysis of cDNA and genomic clones, codes for a protein of 575 amino acids containing a 24 amino acid leader peptide. The human gene has five exons that code for a protein of 560 amino acids. A comparison of the bovine and human MIS proteins reveals a highly conserved C-terminal domain that shows marked homology with human transforming growth factor-beta and the beta chain of porcine inhibin. Animal cells transfected with the human gene secrete biologically active MIS, which causes regression of the rat Müllerian duct in vitro.