Regulation of hypoxia-inducible factor-1α by NF-κB 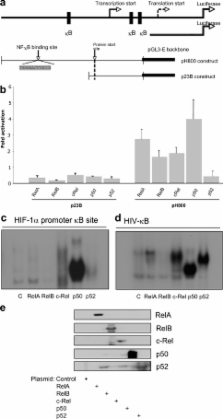 HIF (hypoxia-inducible factor) is the main transcription factor activated by low oxygen tensions. HIF-1α (and other α subunits) is tightly controlled mostly at the protein level, through the concerted action of a class of enzymes called PHDs (prolyl hydroxylases) 1, 2 and 3. Most of the knowledge of HIF derives from studies following hypoxic stress; however, HIF-1α stabilization is also found in non-hypoxic conditions through an unknown mechanism. In the present study, we demonstrate that NF-κB (nuclear factor κB) is a direct modulator of HIF-1α expression. The HIF-1α promoter is responsive to selective NF-κB subunits. siRNA (small interfering RNA) studies for individual NF-κB members revealed differential effects on HIF-1α mRNA levels, indicating that NF-κB can regulate basal HIF-1α expression. Finally, when endogenous NF-κB is induced by TNFα (tumour necrosis factor α) treatment, HIF-1α levels also change in an NF-κB-dependent manner. In conclusion, we find that NF-κB can regulate basal TNFα and, in certain circumstances, the hypoxia-induced HIF-1α.

Jacques Pouysségur,  Emmanuel Benizri,  Edurne Berra … (2003)
Hypoxia-inducible factor (HIF), a transcriptional complex conserved from Caenorhabditis elegans to vertebrates, plays a pivotal role in cellular adaptation to low oxygen availability. In normoxia, the HIF-alpha subunits are targeted for destruction by prolyl hydroxylation, a specific modification that provides recognition for the E3 ubiquitin ligase complex containing the von Hippel-Lindau tumour suppressor protein (pVHL). Three HIF prolyl-hydroxylases (PHD1, 2 and 3) were identified recently in mammals and shown to hydroxylate HIF-alpha subunits. Here we show that specific 'silencing' of PHD2 with short interfering RNAs is sufficient to stabilize and activate HIF-1alpha in normoxia in all the human cells investigated. 'Silencing' of PHD1 and PHD3 has no effect on the stability of HIF-1alpha either in normoxia or upon re-oxygenation of cells briefly exposed to hypoxia. We therefore conclude that, in vivo, PHDs have distinct assigned functions, PHD2 being the critical oxygen sensor setting the low steady-state levels of HIF-1alpha in normoxia. Interestingly, PHD2 is upregulated by hypoxia, providing an HIF-1-dependent auto-regulatory mechanism driven by the oxygen tension.

Elaine Lo,  Donna Ryan,  Paul Johnson (1998)
The transcriptional response to lowered oxygen levels is mediated by the hypoxia-inducible transcription factor (HIF-1), a heterodimer consisting of the constitutively expressed aryl hydrocarbon receptor nuclear translocator (ARNT) and the hypoxic response factor HIF-1alpha. To study the role of the transcriptional hypoxic response in vivo we have targeted the murine HIF-1alpha gene. Loss of HIF-1alpha in embryonic stem (ES) cells dramatically retards solid tumor growth; this is correlated with a reduced capacity to release the angiogenic factor vascular endothelial growth factor (VEGF) during hypoxia. HIF-1alpha null mutant embryos exhibit clear morphological differences by embryonic day (E) 8.0, and by E8.5 there is a complete lack of cephalic vascularization, a reduction in the number of somites, abnormal neural fold formation and a greatly increased degree of hypoxia (measured by the nitroimidazole EF5). These data demonstrate the essential role of HIF-1alpha in controlling both embryonic and tumorigenic responses to variations in microenvironmental oxygenation.

Post-translational modifications regulating the activity and function of the nuclear factor kappa B pathway.

Timothy Perkins (2006)
The diverse cellular and biological functions of the nuclear factor kappa B (NF-kappaB) pathway, together with the catastrophic consequences of its aberrant regulation, demand specific and highly regulated control of its activity. As described in this review, regulation of the NF-kappaB pathway is brought about through multiple post-translational modifications that control the activity of the core components of NF-kappaB signaling: the IkappaB kinase (IKK) complex, the IkappaB proteins and the NF-kappaB subunits themselves. These regulatory modifications, which include phosphorylation, ubiquitination, acetylation, sumoylation and nitrosylation, can vary, depending on the nature of the NF-kappaB-inducing stimulus. Moreover, they frequently have distinct, sometimes antagonistic, functional consequences and the same modification can have different effects depending on the context. Given the important role of NF-kappaB in human health and disease, understanding these pathways will not only provide valuable insights into mechanism and function, but could also lead to new drug targets and the development of diagnostic and prognostic biomarkers for many pathological conditions.

1These authors contributed equally to this work.

Publisher ID: bj4120477
DOI: 10.1042/BJ20080476
PMC ID: 2474706
PubMed ID: 18393939
Copyright statement: © 2008 The Author(s) The author(s) has paid for this article to be freely available under the terms of the Creative Commons Attribution Non-Commercial Licence (http://creativecommons.org/licenses/by-nc/2.5/) which permits unrestricted non-commercial use, distribution and reproduction in any medium, provided the original work is properly cited
License: