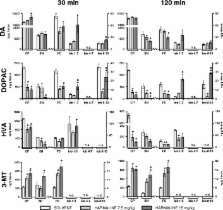 Abnormal synchronous activation of the glutamatergic olivo-cerebellar pathway has been suggested to be crucial for the harmaline-induced tremor. The cerebellum receives two catecholaminergic pathways: the dopaminergic pathway arising from the ventral tegmental area/substantia nigra pars compacta, and the noradrenergic one from the locus coeruleus. The aim of the present study was to examine a contribution of the cerebellar catecholaminergic innervations to the harmaline-induced tremor in rats. Rats were injected bilaterally into the cerebellar vermis with 6-hydroxydopamine (6-OHDA; 8 μg/0.5 μl) either alone or this treatment was preceded (30 min earlier) by desipramine (15 mg/kg ip). Harmaline was administered to animals in doses of 7.5 or 15 mg/kg ip. Tremor of forelimbs was measured as a number of episodes during a 90-min observation. Rats were killed by decapitation 30 or 120 min after harmaline treatment. The levels of dopamine, noradrenaline, serotonin, and their metabolites were measured by HPLC in the cerebellum, substantia nigra, caudate–putamen, and frontal cortex. 6-OHDA injected alone enhanced the harmaline-induced tremor. Furthermore, it decreased the noradrenaline level by ca. 40–80% in the cerebellum and increased the levels of serotonin and 5-HIAA in the caudate–putamen and frontal cortex in untreated and/or harmaline-treated animals. When 6-OHDA treatment was preceded by desipramine, it decreased dopaminergic transmission in some regions of the cerebellum while inducing its compensatory activation in others. The latter lesion did not markedly influence the tremor induced by harmaline. The present study indicates that noradrenergic innervation of the cerebellum interacts with cerebral serotonergic systems and plays an inhibitory role in the harmaline-induced tremor.

The cerebellum communicates with the basal ganglia.

Bryan Feger,  P L Strick,  Léon Tremblay … (2005)
The cerebral cortex is interconnected with two major subcortical structures: the basal ganglia and the cerebellum. How and where cerebellar circuits interact with basal ganglia circuits has been a longstanding question. Using transneuronal transport of rabies virus in macaques, we found that a disynaptic pathway links an output stage of cerebellar processing, the dentate nucleus, with an input stage of basal ganglia processing, the striatum.

Role of hyperactive cerebellum and motor cortex in Parkinson's disease.

Oscillatory properties of guinea-pig inferior olivary neurones and their pharmacological modulation: an in vitro study.

Yosef Yarom,  R Llinás (1986)
The oscillatory properties of the membrane potential in inferior olivary neurones were studied in guinea-pig brain-stem slices maintained in vitro. Intracellular double-ramp current injection at frequencies of 1-20 Hz revealed that inferior olivary neurones tend to fire at two preferred frequencies: 3-6 Hz when the cells were actively depolarized (resting potential less than -50 mV), and 9-12 Hz when they were actively hyperpolarized (resting potential more than -75 mV). In 10% of the experiments spontaneous subthreshold oscillations of the membrane potential were observed. These oscillations, which resembled sinusoidal wave forms and had a frequency of 4-6 Hz and an amplitude of 5-10 mV, occurred synchronously in all cells tested within the slice. These oscillations persisted in the presence of 10(-4) M-tetrodotoxin and were blocked by Ca2+ conductance blockers or by the removal of Ca2+ from the bathing solution. The oscillations were affected by gross extracellular stimulation of the slice but not by intracellular activation of any given neurone. The data indicate that these oscillations reflect the properties of neuronal ensembles comprised of a large number of coupled elements. Similar ensemble oscillation could be induced, in most experiments, by adding harmaline (0.1 mg/ml) and serotonin (10(-4) M) to the bath and could be blocked by bath addition of noradrenaline. Harmaline was found to increase cell excitability by hyperpolarizing the neurones and shifting the inactivation curve for the somatic Ca2+ spike to a more positive membrane potential level. The role inferior olivary oscillations play in the organization of motor coordination is discussed.