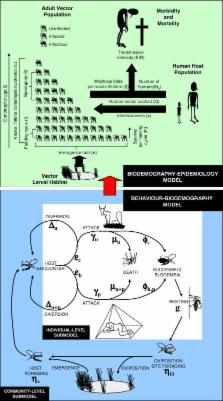 Malaria prevention in Africa merits particular attention as the world strives toward a better life for the poorest. Insecticide-treated nets (ITNs) represent a practical means to prevent malaria in Africa, so scaling up coverage to at least 80% of young children and pregnant women by 2010 is integral to the Millennium Development Goals (MDG). Targeting individual protection to vulnerable groups is an accepted priority, but community-level impacts of broader population coverage are largely ignored even though they may be just as important. We therefore estimated coverage thresholds for entire populations at which individual- and community-level protection are equivalent, representing rational targets for ITN coverage beyond vulnerable groups.

Using field-parameterized malaria transmission models, we show that high (80% use) but exclusively targeted coverage of young children and pregnant women (representing <20% of the population) will deliver limited protection and equity for these vulnerable groups. In contrast, relatively modest coverage (35%–65% use, with this threshold depending on ecological scenario and net quality) of all adults and children, rather than just vulnerable groups, can achieve equitable community-wide benefits equivalent to or greater than personal protection.

Coverage of entire populations will be required to accomplish large reductions of the malaria burden in Africa. While coverage of vulnerable groups should still be prioritized, the equitable and communal benefits of wide-scale ITN use by older children and adults should be explicitly promoted and evaluated by national malaria control programmes. ITN use by the majority of entire populations could protect all children in such communities, even those not actually covered by achieving existing personal protection targets of the MDG, Roll Back Malaria Partnership, or the US President's Malaria Initiative.

Based on malaria transmission models, Gerry Killeen and colleagues suggest that, while coverage of pregnant women and children should still be prioritized, wide-scale communal use of insecticide-treated bed nets would provide considerable benefit to vulnerable groups and should be promoted and evaluated in the field.

Malaria—a parasitic disease common in tropical and subtropical countries—causes about a million deaths every year, mainly among young children and pregnant women living in sub-Saharan Africa. The parasite responsible for most of these deaths is Plasmodium falciparum. Like all malaria parasites, it has a complex life cycle, part of which takes place inside mosquitoes. When a malaria-carrying mosquito bites a person (usually at night), parasites enter the human blood stream and travel to the liver where they reproduce before invading red blood cells. Here, they multiply again before bursting out and infecting more red blood cells as well as causing a high fever and sometimes damaging the nervous system, liver, and kidneys. When a mosquito bites someone who is infected, it often picks up parasites in its blood meal (mosquitoes need mammalian blood for successful reproduction), thus completing the malarial transmission cycle.

One way to break this cycle and reduce malarial transmission is to decrease the number of contacts between people and mosquitoes by encouraging people to sleep under insecticide-treated nets (ITNs). Field studies have shown that ITN use reduces deaths from malaria, so the Roll Back Malaria Partnership, the United Nations Millennium Development Goals, and the US President's Malaria Initiative have set a target of at least 80% use of ITNs by young children and pregnant women (the people most vulnerable to malaria) by 2010. But would broader population coverage with ITNs interrupt the malarial transmission cycle more effectively? Might the wider use of ITNs (which both directly kill mosquitoes and repel them so that mosquitoes have to travel farther to get the blood they need to reproduce) be a more effective way to reduce local mosquito numbers and, consequently, human–mosquito contacts and malarial transmission? In this study, the researchers used mathematical modeling to ask how much community-wide coverage with ITNs is needed to protect vulnerable individuals against malaria without them personally using an ITN.

The researchers developed a model for the transmission of the malaria parasite using data collected in Tanzanian villages where malaria is common, and used it to investigate how different patterns of ITN use might affect the individual protection of ITN users and the communal protection of nonusers. High (80%) coverage targeted at young children and pregnant women (less than 20% of the population) provided limited but valuable protection to these vulnerable individuals. However, the model predicted that a similar degree of community-wide protection would result if 35% of the whole population slept under ITNs provided there was no nonhuman blood supply for the mosquitoes. In other words, the vulnerable individuals in the population received the same degree of protection from this intervention as they would have got from personally using an ITN. If an alternative blood supply for the mosquitoes (for example, cattle) was included in the model, just over half of the population needed to sleep under ITNs to provide the same degree of community-wide protection as targeted ITN use.

Although the use of ITNs by vulnerable groups should remain a priority, these findings suggest that the wide-scale ITN use by the entire population should also be promoted. The use of ITNs by about half the population, predict the researchers, could protect all the young children in that population, even those who did not sleep under a net. As with all mathematical models, the accuracy of this prediction depends on the assumptions and data incorporated into the model. So before recommending community-wide use of ITNs, the actual level of communal protection provided by increased ITN coverage must be measured by rigorously evaluating ongoing national programmes. If such surveillance data confirm this model's predictions, wide coverage with ITNs might do more for public health in Africa than previously thought, suggest the researchers, provided the financial and logistical challenges associated with achieving high ITN coverage in this poor region of the world can be solved.

The global distribution of clinical episodes of Plasmodium falciparum malaria.

Robert W. Snow, Carlos Guerra, Abdisalan Noor … (2005)
Interest in mapping the global distribution of malaria is motivated by a need to define populations at risk for appropriate resource allocation and to provide a robust framework for evaluating its global economic impact. Comparison of older and more recent malaria maps shows how the disease has been geographically restricted, but it remains entrenched in poor areas of the world with climates suitable for transmission. Here we provide an empirical approach to estimating the number of clinical events caused by Plasmodium falciparum worldwide, by using a combination of epidemiological, geographical and demographic data. We estimate that there were 515 (range 300-660) million episodes of clinical P. falciparum malaria in 2002. These global estimates are up to 50% higher than those reported by the World Health Organization (WHO) and 200% higher for areas outside Africa, reflecting the WHO's reliance upon passive national reporting for these countries. Without an informed understanding of the cartography of malaria risk, the global extent of clinical disease caused by P. falciparum will continue to be underestimated.

M. E. Woolhouse, C. Dye, J F Etard … (1997)
From an analysis of the distributions of measures of transmission rates among hosts, we identify an empirical relationship suggesting that, typically, 20% of the host population contributes at least 80% of the net transmission potential, as measured by the basic reproduction number, R0. This is an example of a statistical pattern known as the 20/80 rule. The rule applies to a variety of disease systems, including vector-borne parasites and sexually transmitted pathogens. The rule implies that control programs targeted at the "core" 20% group are potentially highly effective and, conversely, that programs that fail to reach all of this group will be much less effective than expected in reducing levels of infection in the population as a whole.