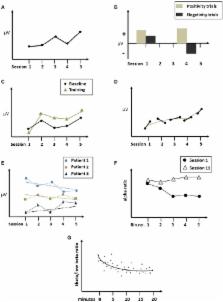 While issues of efficacy and specificity are crucial for the future of neurofeedback training, there may be alternative designs and control analyses to circumvent the methodological and ethical problems associated with double-blind placebo studies. Surprisingly, most NF studies do not report the most immediate result of their NF training, i.e., whether or not children with ADHD gain control over their brain activity during the training sessions. For the investigation of specificity, however, it seems essential to analyze the learning and adaptation processes that take place in the course of the training and to relate improvements in self-regulated brain activity across training sessions to behavioral, neuropsychological and electrophysiological outcomes. To this aim, a review of studies on neurofeedback training with ADHD patients which include the analysis of learning across training sessions or relate training performance to outcome is presented. Methods on how to evaluate and quantify learning of EEG regulation over time are discussed. “Non-learning” has been reported in a small number of ADHD-studies, but has not been a focus of general methodological discussion so far. For this reason, selected results from the brain-computer interface (BCI) research on the so-called “brain-computer illiteracy”, the inability to gain control over one’s brain activity, are also included. It is concluded that in the discussion on specificity, more attention should be devoted to the analysis of EEG regulation performance in the course of the training and its impact on clinical outcome. It is necessary to improve the knowledge on characteristic cross-session and within-session learning trajectories in ADHD and to provide the best conditions for learning.

Jim Stevenson,  Chris Hollis,  Jan Buitelaar … (2013)
Nonpharmacological treatments are available for attention deficit hyperactivity disorder (ADHD), although their efficacy remains uncertain. The authors undertook meta-analyses of the efficacy of dietary (restricted elimination diets, artificial food color exclusions, and free fatty acid supplementation) and psychological (cognitive training, neurofeedback, and behavioral interventions) ADHD treatments. Using a common systematic search and a rigorous coding and data extraction strategy across domains, the authors searched electronic databases to identify published randomized controlled trials that involved individuals who were diagnosed with ADHD (or who met a validated cutoff on a recognized rating scale) and that included an ADHD outcome. Fifty-four of the 2,904 nonduplicate screened records were included in the analyses. Two different analyses were performed. When the outcome measure was based on ADHD assessments by raters closest to the therapeutic setting, all dietary (standardized mean differences=0.21-0.48) and psychological (standardized mean differences=0.40-0.64) treatments produced statistically significant effects. However, when the best probably blinded assessment was employed, effects remained significant for free fatty acid supplementation (standardized mean difference=0.16) and artificial food color exclusion (standardized mean difference=0.42) but were substantially attenuated to nonsignificant levels for other treatments. Free fatty acid supplementation produced small but significant reductions in ADHD symptoms even with probably blinded assessments, although the clinical significance of these effects remains to be determined. Artificial food color exclusion produced larger effects but often in individuals selected for food sensitivities. Better evidence for efficacy from blinded assessments is required for behavioral interventions, neurofeedback, cognitive training, and restricted elimination diets before they can be supported as treatments for core ADHD symptoms.

Andrea Kübler,  Sebastian Halder,  Sabine Hammer … (2010)
Brain-computer interfaces (BCIs) allow a user to control a computer application by brain activity as measured, e.g., by electroencephalography (EEG). After about 30years of BCI research, the success of control that is achieved by means of a BCI system still greatly varies between subjects. For about 20% of potential users the obtained accuracy does not reach the level criterion, meaning that BCI control is not accurate enough to control an application. The determination of factors that may serve to predict BCI performance, and the development of methods to quantify a predictor value from psychological and/or physiological data serve two purposes: a better understanding of the 'BCI-illiteracy phenomenon', and avoidance of a costly and eventually frustrating training procedure for participants who might not obtain BCI control. Furthermore, such predictors may lead to approaches to antagonize BCI illiteracy. Here, we propose a neurophysiological predictor of BCI performance which can be determined from a two minute recording of a 'relax with eyes open' condition using two Laplacian EEG channels. A correlation of r=0.53 between the proposed predictor and BCI feedback performance was obtained on a large data base with N=80 BCI-naive participants in their first session with the Berlin brain-computer interface (BBCI) system which operates on modulations of sensory motor rhythms (SMRs). Copyright 2010 Elsevier Inc. All rights reserved.

Towards a Cure for BCI Illiteracy

Carmen Vidaurre,  Benjamin Blankertz (2009)
Brain–Computer Interfaces (BCIs) allow a user to control a computer application by brain activity as acquired, e.g., by EEG. One of the biggest challenges in BCI research is to understand and solve the problem of “BCI Illiteracy”, which is that BCI control does not work for a non-negligible portion of users (estimated 15 to 30%). Here, we investigate the illiteracy problem in BCI systems which are based on the modulation of sensorimotor rhythms. In this paper, a sophisticated adaptation scheme is presented which guides the user from an initial subject-independent classifier that operates on simple features to a subject-optimized state-of-the-art classifier within one session while the user interacts the whole time with the same feedback application. While initial runs use supervised adaptation methods for robust co-adaptive learning of user and machine, final runs use unsupervised adaptation and therefore provide an unbiased measure of BCI performance. Using this approach, which does not involve any offline calibration measurement, good performance was obtained by good BCI participants (also one novice) after 3–6 min of adaptation. More importantly, the use of machine learning techniques allowed users who were unable to achieve successful feedback before to gain significant control over the BCI system. In particular, one participant had no peak of the sensory motor idle rhythm in the beginning of the experiment, but could develop such peak during the course of the session (and use voluntary modulation of its amplitude to control the feedback application).