60 YEARS OF NEUROENDOCRINOLOGY: The hypothalamo-prolactin axis 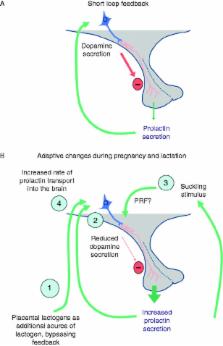 Journal: The Journal of Endocrinology

The hypothalamic control of prolactin secretion is different from other anterior pituitary hormones, in that it is predominantly inhibitory, by means of dopamine from the tuberoinfundibular dopamine neurons. In addition, prolactin does not have an endocrine target tissue, and therefore lacks the classical feedback pathway to regulate its secretion. Instead, it is regulated by short loop feedback, whereby prolactin itself acts in the brain to stimulate production of dopamine and thereby inhibit its own secretion. Finally, despite its relatively simple name, prolactin has a broad range of functions in the body, in addition to its defining role in promoting lactation. As such, the hypothalamo-prolactin axis has many characteristics that are quite distinct from other hypothalamo-pituitary systems. This review will provide a brief overview of our current understanding of the neuroendocrine control of prolactin secretion, in particular focusing on the plasticity evident in this system, which keeps prolactin secretion at low levels most of the time, but enables extended periods of hyperprolactinemia when necessary for lactation. Key prolactin functions beyond milk production will be discussed, particularly focusing on the role of prolactin in inducing adaptive responses in multiple different systems to facilitate lactation, and the consequences if prolactin action is impaired. A feature of this pleiotropic activity is that functions that may be adaptive in the lactating state might be maladaptive if prolactin levels are elevated inappropriately. Overall, my goal is to give a flavour of both the history and current state of the field of prolactin neuroendocrinology, and identify some exciting new areas of research development.

N. Binart,  C Bole,  Paul A T Kelly … (1998)
PRL is an anterior pituitary hormone that, along with GH and PLs, forms a family of hormones that probably resulted from the duplication of an ancestral gene. The PRLR is also a member of a larger family, known as the cytokine class-1 receptor superfamily, which currently has more than 20 different members. PRLRs or binding sites are widely distributed throughout the body. In fact, it is difficult to find a tissue that does not express any PRLR mRNA or protein. In agreement with this wide distribution of receptors is the fact that now more than 300 separate actions of PRL have been reported in various vertebrates, including effects on water and salt balance, growth and development, endocrinology and metabolism, brain and behavior, reproduction, and immune regulation and protection. Clearly, a large proportion of these actions are directly or indirectly associated with the process of reproduction, including many behavioral effects. PRL is also becoming well known as an important regulator of immune function. A number of disease states, including the growth of different forms of cancer as well as various autoimmune diseases, appear to be related to an overproduction of PRL, which may act in an endocrine, autocrine, or paracrine manner, or via an increased sensitivity to the hormone. The first step in the mechanism of action of PRL is the binding to a cell surface receptor. The ligand binds in a two-step process in which site 1 on PRL binds to one receptor molecule, after which a second receptor molecule binds to site 2 on the hormone, forming a homodimer consisting of one molecule of PRL and two molecules of receptor. The PRLR contains no intrinsic tyrosine kinase cytoplasmic domain but associates with a cytoplasmic tyrosine kinase, JAK2. Dimerization of the receptor induces tyrosine phosphorylation and activation of the JAK kinase followed by phosphorylation of the receptor. Other receptor-associated kinases of the Src family have also been shown to be activated by PRL. One major pathway of signaling involves phosphorylation of cytoplasmic State proteins, which themselves dimerize and translocate to nucleus and bind to specific promoter elements on PRL-responsive genes. In addition, the Ras/Raf/MAP kinase pathway is also activated by PRL and may be involved in the proliferative effects of the hormone. Finally, a number of other potential mediators have been identified, including IRS-1, PI-3 kinase, SHP-2, PLC gamma, PKC, and intracellular Ca2+. The technique of gene targeting in mice has been used to develop the first experimental model in which the effect of the complete absence of any lactogen or PRL-mediated effects can be studied. Heterozygous (+/-) females show almost complete failure to lactate after the first, but not subsequent, pregnancies. Homozygous (-/-) females are infertile due to multiple reproductive abnormalities, including ovulation of premeiotic oocytes, reduced fertilization of oocytes, reduced preimplantation oocyte development, lack of embryo implantation, and the absence of pseudopregnancy. Twenty per cent of the homozygous males showed delayed fertility. Other phenotypes, including effects on the immune system and bone, are currently being examined. It is clear that there are multiple actions associated with PRL. It will be important to correlate known effects with local production of PRL to differentiate classic endocrine from autocrine/paracrine effects. The fact that extrapituitary PRL can, under some circumstances, compensate for pituitary PRL raises the interesting possibility that there may be effects of PRL other than those originally observed in hypophysectomized rats. The PRLR knockout mouse model should be an interesting system by which to look for effects activated only by PRL or other lactogenic hormones. On the other hand, many of the effects reported in this review may be shared with other hormones, cytokines, or growth factors and thus will be more difficult to study. (ABSTRACT TRUNCATED)

Minireview: kisspeptin/neurokinin B/dynorphin (KNDy) cells of the arcuate nucleus: a central node in the control of gonadotropin-releasing hormone secretion.

Michael N. Lehman,  Lique Coolen,  Anna Goodman … (2010)
Recently, a subset of neurons was identified in the arcuate nucleus of the hypothalamus that colocalize three neuropeptides, kisspeptin, neurokinin B, and dynorphin, each of which has been shown to play a critical role in the central control of reproduction. Growing evidence suggests that these neurons, abbreviated as the KNDy subpopulation, are strongly conserved across a range of species from rodents to humans and play a key role in the physiological regulation of GnRH neurons. KNDy cells are a major target for steroid hormones, form a reciprocally interconnected network, and have direct projections to GnRH cell bodies and terminals, features that position them well to convey steroid feedback control to GnRH neurons and potentially serve as a component of the GnRH pulse generator. In addition, recent work suggests that alterations in KNDy cell peptides may underlie neuroendocrine defects seen in clinical reproductive disorders such as polycystic ovarian syndrome. Taken together, this evidence suggests a key role for the KNDy subpopulation as a focal point in the control of reproductive function in health and disease.