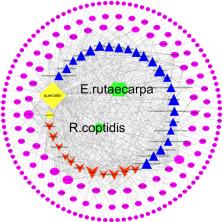 A network pharmacology-based strategy combined with molecular docking studies and in vitro validation were employed to investigate bioactive compounds, potential targets, and molecular mechanism of ZJW against CRC.

Bioactive compounds and potential targets of ZJW, as well as related genes of CRC, were acquired from public databases. Important ingredients, potential targets, and signaling pathways were determined through bioinformatics analysis, including protein–protein interaction (PPI), the Gene Ontology (GO), and the Kyoto Encyclopedia of Genes and Genomes (KEGG). Subsequently, molecular docking and cell experiments were performed to further verify the findings.

A total of 36 bioactive ingredients of ZJW and 163 gene targets of ZJW were identified. The network analysis revealed that quercetin, baicalein, wogonin, beta-sitosterol, and isorhamnetin may be candidate agents. The AKT1, JUN, CDKN1A, BCL2L1, and NCOA1 could become potential drug targets. The KEGG indicated that PI3K-AKT signaling pathway may play an important role in the effect of ZJW against CRC. Molecular docking suggested that quercetin, baicalein, and wogonin combined well with AKT1 and JUN. The in vitro experiment showed that quercetin, the most important ingredient of ZJW, could induce apoptosis of HCT116 cells through PI3K-Akt signaling pathway. This finding was congruent with the prediction obtained through the network pharmacology approach.

This study comprehensively illuminated the active ingredients, potential targets, and molecular mechanism of ZJW against CRC. It also provided a promising approach to uncover the scientific basis and therapeutic mechanism of traditional Chinese medicine (TCM) formula treating for disease.

Exploring the pharmacological mechanism of Yanghe Decoction on HER2-positive breast cancer by a network pharmacology approach.

CXCR2 promotes breast cancer metastasis and chemoresistance via suppression of AKT1 and activation of COX2.

Yu-Chen Tang,  Yan X. Zhang,  Jin Zhou … (2017)
Anti-angiogenic therapy has been successfully applied to treat colorectal cancer (CRC). Ginsenoside Rg3, derived from the Chinese herb ginseng, has anti-vascularization effects and can inhibit tumor growth and metastasis, and can sensitize cancer cells to chemotherapy. Therefore, in the present study, we investigated whether Rg3 could be appropriate for CRC treatment. Growth of CRC cells was assessed by an MTT (methyl thiazolyl tetrazolium) assay in vitro and using orthotopic xenograft models in vivo. mRNA expression was evaluated using real-time PCR. Protein levels were tested by western blotting, flow cytometry and immunohistochemistry. Migration was determined using a wound-healing assay. Stemness was further confirmed using a plate clone formation assay. We found that Rg3 repressed the growth and stemness of CRC cells both in vitro and in vivo. Rg3 also impaired the migration of CRC cells in vitro. Rg3 downregulated the expressions of angiogenesis-related genes, and repressed the vascularization of CRC xenografts. In addition, Rg3 strengthened the cytotoxicity of 5-Fluorouracil and oxaliplatin against orthotopic xenografts in vivo. Moreover, Rg3 downregulated the expressions of B7-H1 and B7-H3, high expressions of which were associated with reduced overall survival (OS) of CRC patients. Hence, Rg3 not only repressed the growth and stemness of CRC cells, but could also remodel the tumor microenvironment through repressing angiogenesis and promoting antitumor immunity. Therefore, Rg3 could be a novel therapeutic for the CRC treatment.