Clinical efficacy and safety of anticholinergic therapies in pediatric patients 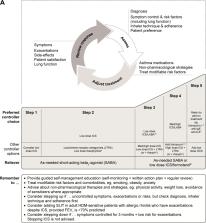 The burden of uncontrolled asthma in children and adolescents is high. Treatment options for pediatric patients (aged under 18 years) with asthma are largely influenced by the Global Initiative for Asthma recommendations. Algorithms for adolescents (12–18 years) and adults are identical, but recommendations for children aged under 6 years and 6–11 years differ. Although the goals of treatment for pediatric patients with asthma are similar to those for adults, relatively few new therapies have been approved for this patient population within the last decade. Designing clinical trials involving children presents several challenges, notably that children are often less able to perform lung function tests, and traditional endpoints used in clinical trials with adults, such as forced expiratory volume in 1 second, asthma exacerbations and questionnaires, have limitations associated with their use in children. There are also ethical considerations related to the performance of longer placebo-controlled exacerbation trials. This review considers additional clinical endpoints to those traditionally reported, including forced expiratory flow at 25%–75% of forced vital capacity, which may help shed light on which treatments are most effective for use in pediatric patients with asthma. The pros and cons of specific and potentially clinically relevant endpoints are considered, along with device considerations and patient preferences that may enhance adherence and quality of life. Recent advances in the management of children and adolescents, including the US Food and Drug Administration and European Medicines Agency approval of tiotropium in patients with asthma aged 6 years and over, are also discussed.

International Study of Asthma and Allergies in Childhood (ISAAC): rationale and methods.

Richard Beasley,  Melissa L. Anderson,  Linda Asher … (1995)
The aetiology of asthma and allergic disease remains poorly understood, despite considerable research. The International Study of Asthma and Allergies in Childhood (ISAAC), was founded to maximize the value of epidemiological research into asthma and allergic disease, by establishing a standardized methodology and facilitating international collaboration. Its specific aims are: 1) to describe the prevalence and severity of asthma, rhinitis and eczema in children living in different centres, and to make comparisons within and between countries; 2) to obtain baseline measures for assessment of future trends in the prevalence and severity of these diseases; and 3) to provide a framework for further aetiological research into genetic, lifestyle, environmental, and medical care factors affecting these diseases. The ISAAC design comprises three phases. Phase 1 uses core questionnaires designed to assess the prevalence and severity of asthma and allergic disease in defined populations. Phase 2 will investigate possible aetiological factors, particularly those suggested by the findings of Phase 1. Phase 3 will be a repetition of Phase 1 to assess trends in prevalence.

Global burden of asthma among children.

I Asher,  Neil Pearce (2014)
About 334 million people worldwide suffer from asthma, and this figure may be an underestimation. It is the most common chronic disease in children. Asthma is among the top 20 chronic conditions for global ranking of disability-adjusted life years in children; in the mid-childhood ages 5-14 years it is among the top 10 causes. Death rates from asthma in children globally range from 0.0 to 0.7 per 100 000. There are striking global variations in the prevalence of asthma symptoms (wheeze in the past 12 months) in children, with up to 13-fold differences between countries. Although asthma symptoms are more common in many high-income countries (HICs), some low- and middle-income countries (LMICs) also have high levels of asthma symptom prevalence. The highest prevalence of symptoms of severe asthma among children with wheeze in the past 12 months is found in LMICs and not HICs. From the 1990s to the 2000s, asthma symptoms became more common in some high-prevalence centres in HICs; in many cases, the prevalence stayed the same or even decreased. At the same time, many LMICs with large populations showed increases in prevalence, suggesting that the overall world burden is increasing, and that therefore global disparities in asthma prevalence are decreasing. The costs of asthma, where they have been estimated, are relatively high. The global burden of asthma in children, including costs, needs ongoing monitoring using standardised methods.

Ekkehard Beck,  Huib A M Kerstjens,  Wolfgang Seibold … (2012)
Some patients with asthma have frequent exacerbations and persistent airflow obstruction despite treatment with inhaled glucocorticoids and long-acting beta-agonists (LABAs). In two replicate, randomized, controlled trials involving 912 patients with asthma who were receiving inhaled glucocorticoids and LABAs, we compared the effect on lung function and exacerbations of adding tiotropium (a total dose of 5 μg) or placebo, both delivered by a soft-mist inhaler once daily for 48 weeks. All the patients were symptomatic, had a post-bronchodilator forced expiratory volume in 1 second (FEV(1)) of 80% or less of the predicted value, and had a history of at least one severe exacerbation in the previous year. The patients had a mean baseline FEV(1) of 62% of the predicted value; the mean age was 53 years. At 24 weeks, the mean (±SE) change in the peak FEV(1) from baseline was greater with tiotropium than with placebo in the two trials: a difference of 86±34 ml in trial 1 (P=0.01) and 154±32 ml in trial 2 (P<0.001). The predose (trough) FEV(1) also improved in trials 1 and 2 with tiotropium, as compared with placebo: a difference of 88±31 ml (P=0.01) and 111±30 ml (P<0.001), respectively. The addition of tiotropium increased the time to the first severe exacerbation (282 days vs. 226 days), with an overall reduction of 21% in the risk of a severe exacerbation (hazard ratio, 0.79; P=0.03). No deaths occurred; adverse events were similar in the two groups. In patients with poorly controlled asthma despite the use of inhaled glucocorticoids and LABAs, the addition of tiotropium significantly increased the time to the first severe exacerbation and provided modest sustained bronchodilation. (Funded by Boehringer Ingelheim and Pfizer; ClinicalTrials.gov numbers, NCT00772538 and NCT00776984.).

The full terms of this license are available at https://www.dovepress.com/terms.php and incorporate the Creative Commons Attribution – Non Commercial (unported, v3.0) License ( http://creativecommons.org/licenses/by-nc/3.0/). By accessing the work you hereby accept the Terms. Non-commercial uses of the work are permitted without any further permission from Dove Medical Press Limited, provided the work is properly attributed