Prevalence and Management of Septic Shock among Children Admitted at the Kenyatta National Hospital, Longitudinal Survey 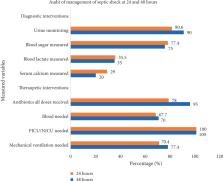 Paediatric septic shock is a subset of sepsis associated with high mortality. Implementing the existing international Surviving Sepsis Campaign Guidelines 2012 (SSCG) have contributed to reduction of mortality in many places but these have not been adopted in our setting. The current study aimed at documenting the practice at a national referral hospital.

A hospital based longitudinal survey carried out among 325 children from September to October 2016. Children aged 0 days (≥37 weeks gestation) to12 years were included. The aim was to determine the prevalence, audit the management and determine the outcome at 72 hours of septic shock among children admitted at the Kenyatta National Hospital (KNH). A standard questionnaire was used for data collection and Surviving Sepsis Guideline 2012 was used as a reference for auditing the management of septic shock. Data was stored in MS-EXCEL and analysed in STATA 12.

The prevalence rate of septic shock is 15.4% among children admitted at the KNH and is associated with high mortality. The advanced degree of shock contributed to mortality. The level of care at KNH was not to the level of SSCG 2012, and hence the need to include septic shock management guidelines/protocols in our local Kenyan paediatric guideline.

M J Westerman,  R. Orr,  Michelle Dragotta … (2003)
Experimental and clinical studies of septic shock support the concept that early resuscitation with fluid and inotropic therapies improves survival in a time-dependent manner. The new American College of Critical Care Medicine-Pediatric Advanced Life Support (ACCM-PALS) Guidelines for hemodynamic support of newborns and children in septic shock recommend this therapeutic approach. The objective of this study was to determine whether early septic shock reversal and use of resuscitation practice consistent with the new ACCM-PALS Guidelines by community physicians is associated with improved outcome. A 9-year (January 1993-December 2001) retrospective cohort study was conducted of 91 infants and children who presented to local community hospitals with septic shock and required transport to Children's Hospital of Pittsburgh. Shock reversal (defined by return of normal systolic blood pressure and capillary refill time), resuscitation practice concurrence with ACCM-PALS Guidelines, and hospital mortality were measured. Overall, 26 (29%) patients died. Community physicians successfully achieved shock reversal in 24 (26%) patients at a median time of 75 minutes (when the transport team arrived at the patient's bedside), which was associated with 96% survival and >9-fold increased odds of survival (9.49 [1.07-83.89]). Each additional hour of persistent shock was associated with >2-fold increased odds of mortality (2.29 [1.19-4.44]). Nonsurvivors, compared with survivors, were treated with more inotropic therapies (dopamine/dobutamine [42% vs 20%] and epinephrine/norepinephrine [42% vs 6%]) but not increased fluid therapy (median volume; 32.9 mL/kg vs 20.0 mL/kg). Resuscitation practice was consistent with ACCM-PALS Guidelines in only 27 (30%) patients; however, when practice was in agreement with guideline recommendations, a lower mortality was observed (8% vs 38%). Early recognition and aggressive resuscitation of pediatric-neonatal septic shock by community physicians can save lives. Educational programs that promote ACCM-PALS recommended rapid, stepwise escalations in fluid as well as inotropic therapies may have value in improving outcomes in these children.

Adherence to PALS Sepsis Guidelines and Hospital Length of Stay.

Raina Paul,  Mark Neuman,  Michael C Monuteaux … (2012)
Few studies have evaluated sepsis guideline adherence in a tertiary pediatric emergency department setting. We sought to evaluate (1) adherence to 2006 Pediatric Advanced Life Support guidelines for severe sepsis and septic shock (SS), (2) barriers to adherence, and (3) hospital length of stay (LOS) contingent on guideline adherence. Prospective cohort study of children presenting to a large urban academic pediatric emergency department with SS. Adherence to 5 algorithmic time-specific goals was reviewed: early recognition of SS, obtaining vascular access, administering intravenous fluids, delivery of vasopressors for fluid refractory shock, and antibiotic administration. Adherence to each time-defined goal and adherence to all 5 components as a bundle were reviewed. A detailed electronic medical record analysis evaluated adherence barriers. The association between guideline adherence and hospital LOS was evaluated by using multivariate negative binomial regression. A total of 126 patients had severe sepsis (14%) or septic shock (86%). The median age was 9 years (interquartile range, 3-16). There was a 37% and 35% adherence rate to fluid and inotrope guidelines, respectively. Nineteen percent adhered to the 5-component bundle. Patients who received 60 mL/kg of intravenous fluids within 60 minutes had a 57% shorter hospital LOS (P = .039) than children who did not. Complete bundle adherence resulted in a 57% shorter hospital LOS (P = .009). Overall adherence to Pediatric Advanced Life Support sepsis guidelines was low; however, when patients were managed within the guideline's recommendations, patients had significantly shorter duration of hospitalization.

Deborah Greenberg,  Nancy Muleady-Mecham,  Stein Larsen (2011)
Unrecognized and undertreated septic shock increases morbidity and mortality. Septic shock in children is defined as sepsis and cardiovascular organ dysfunction, not necessarily with hypotension. Cases of unrecognized and undertreated septic shock in our emergency department (ED) were reviewed with a focus on (1) increased recognition at triage and (2) more aggressive treatment once recognized. We hypothesized that septic shock protocol and care guideline would expedite identification of septic shock, increase compliance with recommended therapy, and improve outcomes. We developed an ED septic shock protocol and care guideline to improve recognition beginning at triage and evaluated all eligible ED patients from January 2005 to December 2009. We identified 345 pediatric ED patients (49% male, median age: 5.6 years), and 297 (86.1%) met septic shock criteria at triage. One hundred ninety-six (56.8%) had ≥ 1 chronic complex condition. Hypotension was present in 34% (n = 120); the most common findings were tachycardia (n = 251 [73%]) and skin-color changes (n = 269 [78%]). The median hospital length of stay declined over the study period (median: 181-140 hours; P < .05); there was no change in mortality rate, which averaged 6.3% (22 of 345). The greatest gains in care included more complete recording of triage vital signs, timely fluid resuscitation and antibiotic administration, and serum lactate determination. Implementation of an ED septic shock protocol and care guideline improved compliance in delivery of rapid, aggressive fluid resuscitation and early antibiotic and oxygen administration and was associated with decreased length of stay.